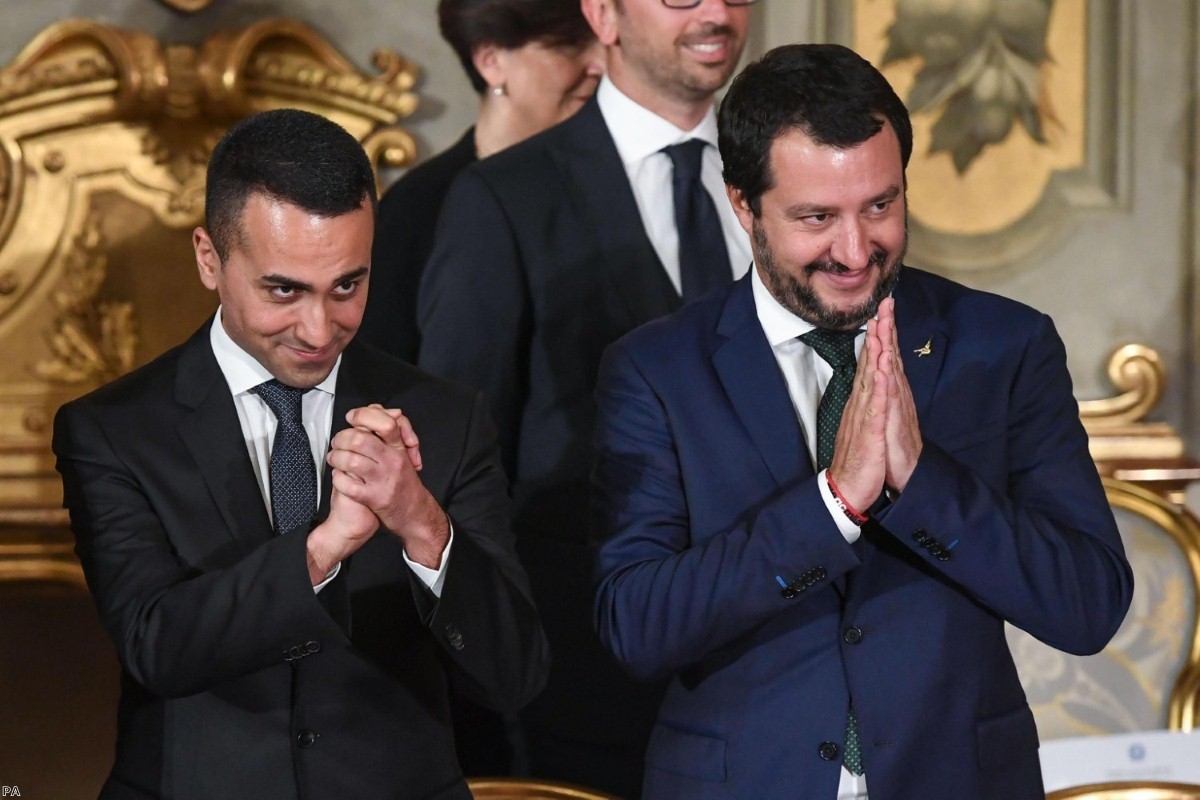 A few days after the general elections in Italy, Nigel Farage told Italian talk show Piazzapulita that "the revolution of Brexit and Trump has been enhanced by the Italian vote". He went on praise both 5-Star Movement and Lega.

It's not the first time the continent's eurosceptic-in-chief has praised the far-right. He supported Marine Le Pen, leader of the neo-fascist Front National, in the French presidential elections. He addressed a far-right rally organised by Alternative for Germany (AfD) alongside Beatrix von Storch, their vice-chairwoman, who suggested asylum seekers trying to cross German borders should be shot.

During his LBC program in April he praised the "absolutely resounding success for prime minister Viktor Orban" in Hungary’s general election, despite the widepsread use of anti-semitism in the campaign. He applauded Italian home affairs minister Matteo Salvini, who is also leader of the Lega, when he refused port access to Aquarius, an SOS Méditerranée's boat with 629 rescued immigrants on board.

Of Farage's various allies, the Italian's are perhaps the most complex. While the Polish and Hungarian governments proudly flaunt their nationalist and right-wing credentials, the 5 Star Movement which got into bed with the Lega has always escaped the left/right dualism. But something is changing now the two parties are allied.

When they negotiated with President Mattarella over the new government, the markets were a pressing concern. The openly anti-euro positions of the Lega and the fluctuating euroscepticism of 5 Star looked like a premonition of Italexit. That caused alarm in Brussels. But the financial reaction seems to have spooked them. Today, Treasury minister Giovanni Tria is doing his best to reassure the EU. So instead, immigration and civil rights are now the main concerns.

The Aquarius case provides the first visceral example. The SOS Méditerranée’s rescue boat was forbidden to dock in Sicily on Sunday, when Salvini closed the harbour to ships rescuing migrants in the Mediterranean Sea. A decision strongly criticised by Malta, Spain and France. Emmanuel Macron condemned the "cynicism and irresponsibility" of the Italian government.

Aquarius was carrying 629 people aboard, including 123 unaccompanied minors and seven pregnant women. Of them, 400 had been previously rescued by the Italian Coast Guard and Navy prior to boarding onto Aquarius, thereby making Italy legally responsible for the rescue. Salvini's decision is therefore a violation of the Hamburg Convention on maritime search and rescue and the European Convention on Human Rights (ECHR), which prohibits mass expulsion of foreigners.

When the Spanish prime minister, Pedro Sanchez, offered to welcome Aquarius in Valencia, Salvini celebrated what he called a victory by announcing that it will prevent access to rescue boats in the future. This is just the latest example of how the growing xenophobic sentiment in Italy is being exploited, and fuelled, by Salvini.

Barely a week passes without him making aggressive statements of this type. Last week, he declared that Tunisia "often exports criminals". Previously he resurrected the slogan "Italians First" – an echo of Donald Trump's campaign mantra, but one which has a difference resonance in Italy due to its use by Italian far-right and neo-fascist movements like Casa Pound and Forza Nuova. He also often claimed he would use a bulldozer to demolish Romani camps.

However, Salvini is not the only one representing the extreme right in the government. At his side is Lorenzo Fontana, a former MEP who has been recently appointed family minister. Fontana, who is linked to Pro Vita Onlus, a pro-life movement disturbingly close to the neo-fascist movement Forza Nuova, believes gay marriage should be banned because it hinders an increase in birth rates.

Following his appointment, Fontana declared that "homosexual families do not exist". It's hardly new material for him. In 2015, he told the National Congress of the Lega: "We want a Europe where marriage is between a mother and a father and where children are given to a mom and a dad! We do not even want to hear about other filth".

On the same occasion, he argued the decline of the birth rate could not be addressed through immigration because "we want a Europe that asks families to have more children, we want a Europe with more European children".

All this is happening with the tacit consent of the 5 Star Movement. 5 Star members of the government are mostly silent now next to their far-right colleagues. Almost no-one speaks about the citizenship income promised during the electoral campaign. Roberto Fico, president of the Chamber of Deputies and once representative of the so-called left wing of the 5 Star Movement, has publicly praised the outcome of Salvini's management of the Aquarius case. Luigi Di Maio, leader of 5-Star and current economic development minister, is increasingly overshadowed by the Lega boss.

Lega's victory in the local elections last weekend is proof that Salvini's strategy is working. The polls show his party has grown rapidly from 17% public support in March to 27% now. The 5 Star Movement, meanwhile, is slowing down in almost all the major cities. To be fair they have historically always been penalised in local elections, but we can presume that running after and endorsing Salvini's xenophobic and eurosceptic messages isn't doing them any favours. The coalition is normalising the far-right in a major European country.

This is the type of government Farage sees fit to praise.

Francesco Zaffarano is a freelance journalist and a former social media editor and video producer for two major Italian newspapers, La Repubblica and La Stampa. He's on Twitter at @FraZaffarano.