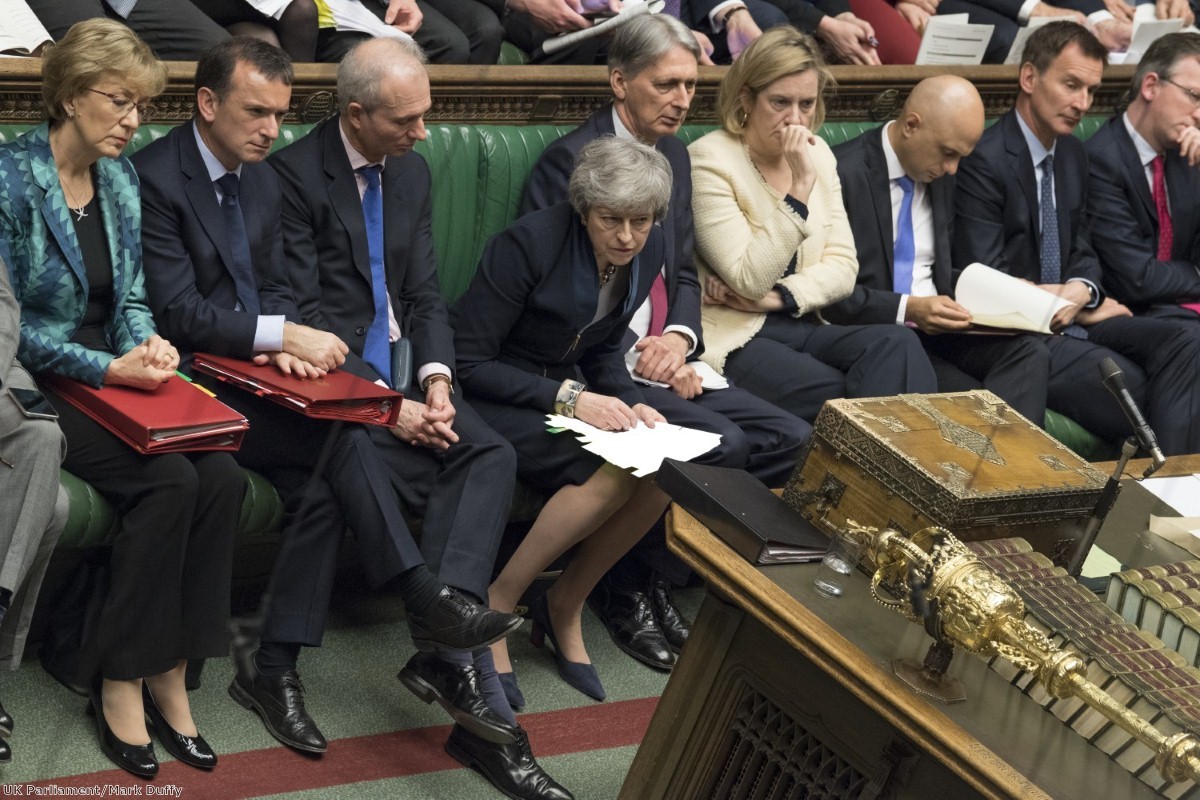 The Brexiters’ rearguard defence against Article 50 extension has fallen apart

One by one the strategies are failing. Last night, in a series of eye-wateringly tight votes in the Commons, a Brexiter rearguard defence collapsed. In Brussels, the options are coming into stark focus. And in Downing Street, the reality is finally being accepted. The battle for a long extension of Article 50 is being won. The chances of no-deal are in steep decline.

Yesterday's Commons debate was historic. It was the first time we'd ever seen parliament start to act like a government, wrestling control of the timetable, then proposing and forcing through legislation.

On the face of it, Yvette Cooper's bill simply pushed for what the prime minister was already doing: an extension of Article 50. But there were two big differences. Firstly, it put the process in the hands of parliament. They would now be able insist that the govt seek extensions rather than trust it to do so. Secondly, it forced the prime minister to state the intended length of the extension and gave MPs the chance to either sign off on it or demand a different one. In the great tug of war between executive and parliamentary power, it was a major pull back to the latter.

It was tight. It was as tight as it is possible for anything to be in the Commons. Just beforehand, MPs voted on holding another day of indicative votes next Monday and it came down to a draw: 310-all. The Speaker, following precedent, gave his decisive vote for the status quo, meaning the day was cancelled.

It was an ominous sign, as if the battle for MPs to take control was fading away. And why not? The prime minister was proposing indicative votes herself. MPs' own motions had not thrown up any viable proposition. Perhaps they were tired of it all, or maybe they were just prepared to sit back for a while and see what Theresa May could fix up in her meetings with Jeremy Corbyn.

Then came the vote on whether MPs would try and push through Cooper's bill. It passed by 312 to 311. Just one vote. That set the tone for what was to come. This thing was going to be agonisingly close. MPs were doing something unprecedented, in a constantly-shifting, high-stakes political situation. It would be a hard fight.

The second reading was passed by 315 votes to 310. The bill then went off immediately for committee stage, the stress-testing process where amendments are added and critics and supporters of legislation batter it around a bit. Usually this takes weeks or months, but it was all being done at extraordinary speed. At one point a printer in the Commons broke down and there was a long period of confusion as amendments were discussed which no-one could see.

Tory Brexiter Bill Cash then launched his rearguard defence on the one issue which, underneath the daily churn of Brexit news, really matters: The European elections. If Britain fails to initiate proceedings to take part in these elections by April 12th, it cannot extend Article 50 past that point. If it does not participate in them on May 22nd, it cannot extend past then. These are the major obstacles around which the process flows.

Just before midnight, MPs came to the vote on third reading, locking the bill into place to be sent to the Lords. It passed by another eye-watering margin: 313 votes to 312.

In truth, the numbers don't tell the full story of how close it was. Fourteen Tories voted for the bill and six abstained. If just one had voted against it, it would have failed.

This defeat was not just lost on the floor of the Commons. It was the result of years of party mismanagement, of a tin-eared prime minister refusing to listen to moderate voices in her government or her party benches, leading key figures to drop out, one by one, over the course of this whole sorry, dreary saga. It was made up of several individual stories of political disenchantment. If any one of them had not happened, yesterday's vote would have failed. It is like a morality tale of the long-term consequences of short-sighted political calculations.

The bill will now go to the Lords, where peers will attach amendments, possibly by the end of the day, in time for a bit of potential bouncing to-and-fro between them and the Commons, before royal assent tomorrow or early next week. The parliamentary route to a longer Article 50 extension seems clear.

Of course, MPs can mandate any length of Article 50 extension they like – Brussels still needs to accept it. The fear among Remainers, and hope among Brexiters, is that they will veto any longer extension. That would be the most despairing twist in the tale: Macron coming to the ERG's rescue. But it is not completely insane: British internal troubles are holding up the EU's ability to focus on the range of other problems it faces. The Europeans are tired and exasperated.

But regardless, it is not likely to happen. In a statement responding to May's plans for a short extension yesterday, European commission president Jean Claude Juncker warned of a no-deal outcome. It sounded a lot like he would refuse requests for a May extension and that Britain was going to fall off the cliff edge next week. But then he gave the game away.

The EU would not "kick out" a member state, he admitted. It is this sentiment which is almost certain to prevail. A longer extension – probably until the end of the year, or next March – is very likely to be offered.

The EU is not going to keep coming back for emergency summits every two weeks to deal with the latest British request, which has been made pointlessly short to make it palatable for domestic audiences. But it will not force no-deal either.

A long extension does not mean you have to be in the whole time. Once a deal is secured, the UK can drop out whenever it likes. So the obvious, rational thing to do is take steps to participate in the European elections then try to pass a deal, with the proviso that you cancel the elections in the UK if you get something done.

This is exactly what chancellor Philip Hammond conceded on ITV last night. "We will have to start preparing for European Parliament elections," he said. "If we get a deal done quickly enough, we can exit before [they] take place."

Political leaders visiting May yesterday as part of her new cross-party approach to Brexit asked the same question: Would the UK be producing domestic measures to ensure participation? The answer, as far as they could make out given May's tortured and opaque phrasing, was yes.

All of these developments – in parliament, Brussels and Downing Street – put the key pieces in place for a long delay, even as political efforts step up to get a deal in the short term. It means the chances of no-deal are steeply decreasing. Things are moving in a positive direction.