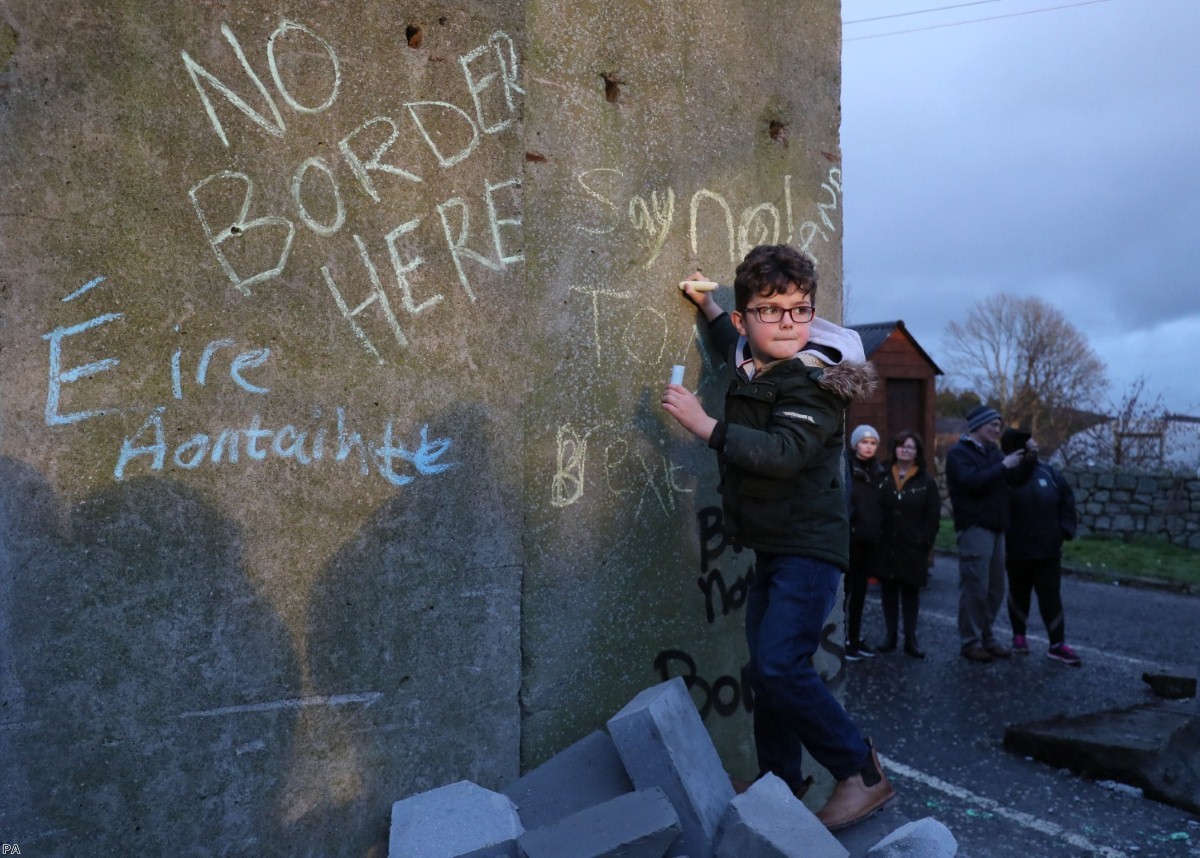 National breakdown: A glimpse of the vicious chaos of no-deal

So it's out. It's not theory anymore.  It's practice. The full scale of Britain's capitulation is in black and white. In a no-deal scenario we would open ourselves out in Ireland and desperately try to maintain control on the mainland. We'd be contorted into a grotesque mess. And then we would, with our tail between our legs, return to Europe, beg for talks and give them whatever they want. No-deal is the absence of control.

This was always the view in Brussels. They figured no-deal, if it happened, would last for a few weeks, maybe even days, before the British returned to the negotiating table and agreed to whatever its demands were. Such would be the effect of the humiliation and chaos. And yet no-dealers still insist, even this morning, that theirs is the only true rapture, the only spiritually pure version of their deluded monocultural dreams. They are not expressing a political view in the traditional sense. It is just the spittle rising from their broken aspirations.

The reality has now been published. Early this morning, timed to minimise the market reaction, the government published its proposed tariff rates and its plans for the border in Ireland. That plan was essentially to throw their hands up and pray for the best. The border between Northern Ireland and the Republic would be kept open. There would be almost no checks.

Imagine the practical implications. Farmers in Northern Ireland would be thrown under the bus. Normally priced food imports would still come flowing in, but they would be priced out of of their export markets in the Republic and the European mainland.

Smuggling would suddenly explode on the Irish border. Anyone with dodgy goods anywhere in Europe would channel it through that area. Criminal gangs would flood in with them.

And even here, in this extreme scenario, checks would soon be needed. Agricultural goods from outside the EU would need to enter through designated border inspection posts. But how would anyone know which goods came from where unless there was some kind of infrastructure to assess it? The reality is this system will either create infrastructure, and therefore establish the skeleton of a hard border, or it will not, in which case it provide no control of the goods flowing into UK territory. The old Brexit arguments about control and trade would suddenly go from abstraction to practice.

If it's the first scenario, the situation can spiral into dangerous outcomes. How long will it be, with no full checking system in place, before something terrible happens? Before illegal weapons come in, or the flow of smuggled goods reaches critical levels, or contaminated meat finds its way into the food chain? And then what will the state do? It will do what it always does: overreact. It will flood the area with new checks, systems and border officers. And then suddenly the exact circumstances we've been trying to avoid – of large-scale border infrastructure in a highly volatile economic and political scenario – will take place.

We're already seeing low-level Ireland-connected terror incidents. A group calling itself the IRA claimed responsibility for a series of improvised explosive devices sent to locations in London and Glasgow last week. In Londonderry last January, a bomb was detonated outside the city's courthouse and a series of mock attacks were carried out on transit vans by masked men. In that environment it is criminally irresponsible to allow this scenario to take place.

But the second scenario, of no checks at all, threatens to turn us into an international pariah. We are opening up a border onto our territory with nothing in place to see what is coming in and out. What effects will that have on the safety of the public, on the viability of our trading regime, and on our international reputation? Will other countries even be prepared to import from us, given we are not able to guarantee the safety or legal status of the goods flowing into the country?

The government also revealed its proposed tariff rates under no-deal this morning. There would be cuts for most goods – where tariffs are anyway largely non-existent – but they'd be maintained for many agricultural goods, where domestic producers would be instantly put out of business by a sudden influx of cheap foreign goods. So sheep meat stays at 100% of the EU's current MFN rate, poultry at 60%, beef at 53% and butter at 32%.

The thinking is sensible enough. They're trying to protect British farmers and industry where possible and elsewhere help consumers who will be hit by price rises as a result of no-deal, not least due to a precipitous decline in sterling.

But what it really entails is an complete overnight overhaul of our entire trading system. No serious nation does business like this. It would be like being hit by an asteroid. There'd have been no consultation with industry, with producers, with parliament, or with the public. Just men in a room somewhere, scribbling down numbers, and then inflicting them on the country with no real idea of what is going to happen.

And how would it work anyway? If the tariff was 60% of the EU's MFN rate at other ports, but zero per cent on the Irish border, why would goods not be directed through the location where no tariff rate applies? The incentive is obvious. How long would that go on for before we need checks on the Irish Sea? How long before we have to start carving up the internal arrangements of our own customs territory in a desperate bid to keep hold of the situation?

And none of these scenarios even address the main bottleneck at Dover-Calais. They are subplots to the main horror story. And yet they are in their own right absolutely catastrophic.

This is the scenario in which we would go back to the EU, humiliated, to restart talks. And the first thing they would ask for are the pre-conditions of the existing deal: The financial payments, the citizens rights provisions, and the backstop.

But, in a pitiful spectacle, the no-deal zealots have still not understood the reality of their position. Yesterday, like some late-80s covers band, Steve Baker, Nicky Morgan, Damian Green and Simon Hart posed on a staircase and took a photo of themselves as they tabled their laughably inane 'Malthouse B' amendment. The more pitiful the ideas, the more feverish the use of names becomes. We have Star Chambers, and Malthouse Compromises, and GATT 24s, and SuperCanandas, and Max-Facs. But what we do not have is a single grain of realism or intelligence from those uttering them.

The latest wheeze proposed that the government offer a mutual standstill arrangement with the EU in exchange for the financial payment. They still don't understand. The financial payment is not a sum to wave around in a bid to bribe the EU into your preferred position. It is an IOU from spending plans we signed off on years ago.

It doesn't matter what you think of it: that is what the EU thinks. That is their long held position which has not varied one inch from when they first stated it. Even as yesterday's debate over Theresa May's deal bored on, EU negotiator Michel Barnier made crystal clear in a tweet that there would only be a transition if there was a deal. He can't possibly be any clearer. And yet they still do not understand.

Listening to debate in @HouseofCommons : there seems to be a dangerous illusion that the UK can benefit from a transition in the absence of the WA.
Let me be clear: the only legal basis for a transition is the WA. No withdrawal agreement means no transition.

Reality simply will not pierce the brains of these people. Baker was on the radio this morning insisting the government could trigger "GATT 24", a Brexiter myth about an international law provision which they say allows for a ten-year standstill trading arrangement. In reality, the provision is for two sides, with a detailed plan. It cannot be used unilaterally, which makes it useless for no-deal. It is, quite literally, a provision for deals. Applying it to a no-deal situation is like taking a boat on a trip to the desert.

And even if EU agreement could be secured – which it cannot, because it has already been ruled out – there is no detailed plan to base it on. But it doesn't matter. It's irrelevant how many former WTO officials or trade negotiators tell them this does not apply. They will not listen. They are living inside their own heads, demanding the worst possible degradation of this country because it somehow might satisfy their bizarre emotional needs.

The truth is out now. It is in black and white in those government documents. It is, simply put and without hyperbole, the most extreme proposition made in mainstream British political debate in our lifetime.