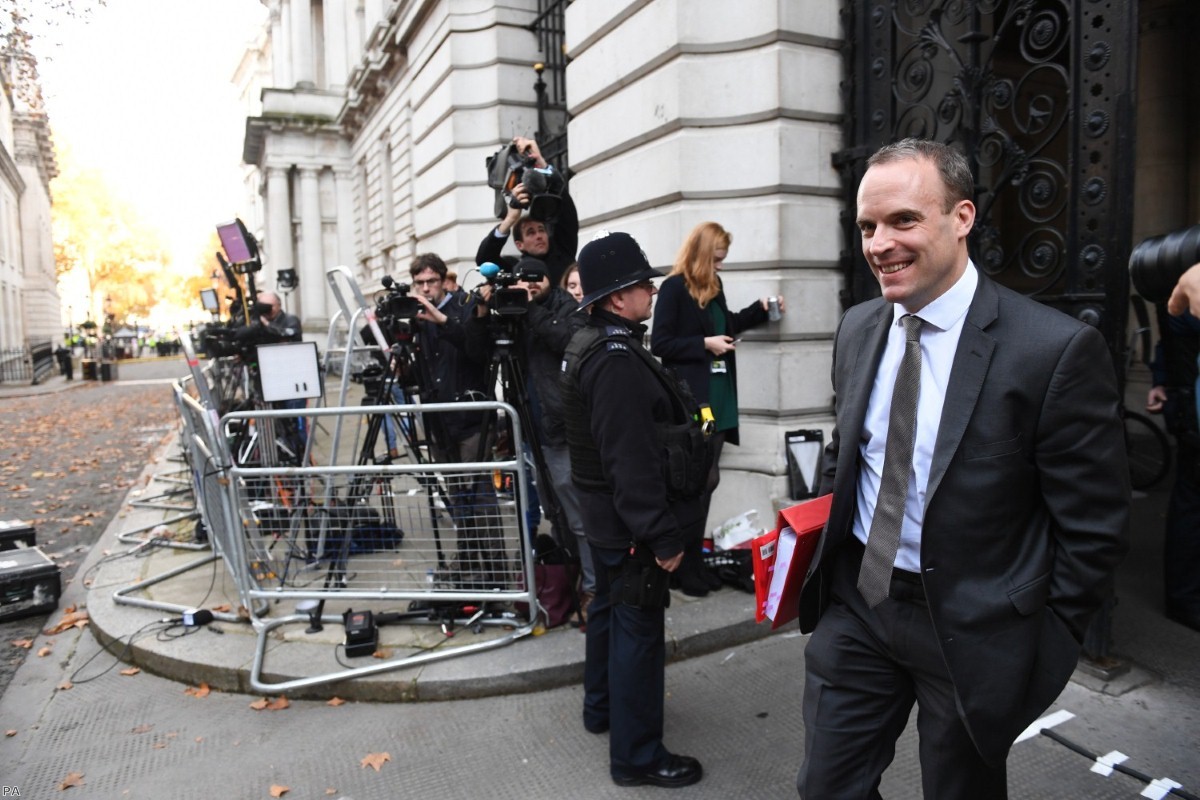 Raab resigns: The shabby end of a pitiful career

Dominic Raab resigned this morning over a deal he ostensibly negotiated. In reality, he'd been sidelined in recent weeks, at least since he demanded a unilateral ability to end the backstop – a suggestion which was never going to have any success in Brussels or indeed in the world of objective semantic meaning. But he sat there anyway, reading the terms of the deal, understanding the dynamics, and somehow found that this was the moment his principles kicked in.

It is hard to think of a less distinguished ministerial career. Raab was sold to us for years as the big brains on the Tory backbenches, the man who knew how to disentangle Britain from the European Convention of Human Rights without unraveling the Good Friday Agreement, the eurosceptic who really grasped the technical and trade implications of leaving the EU.

In reality, when his moment came, Raab was a nervous mess. He plastered a petrified smile on his face as he stood next to Michel Barnier after talks. It was simply embarrassing to watch him stand there and sweat in the limelight, as far better briefed negotiating partners peered at him over their glasses, like a cat looking at its prey.

Later, the full extent of his ignorance was revealed. In an astonishing aside, he revealed that he had no idea that the UK relied heavily on the Dover-Calais route for trade. In the business end of negotiation, Britain's Brexit secretary was learning the basics.

His hypocrisy took marginally longer to reveal itself. When he took the post, after the resignation of his predecessor in similar circumstances, he knew the outlines of what May was negotiating. He knew about the Irish backstop. But he sat there, issued weak threats, and then finally, when it was published, resigned. He is a shambles in human form, a chancer who got found out.

Raab has already been followed by several Brexit-supporting Cabinet secretaries and junior ministers. None of them have stated what they would do instead of the deal May has proposed. They act as if there is some kind of magical Brexit just around the corner which civil servants have simply failed to find. What it is, they are unable to say. They have no answers. They have nothing to offer except their own yearning desires for something they cannot articulate.

The dream is always just that, a dream. The reality is humiliation and chaos. From Brussels' perspective it is genuinely unclear if they have a viable negotiating partner. What a catastrophically shoddy situation for a British government to be in. Two and half years into Brexit and one of the world's leading countries is now so maimed and baffled it cannot even strike deals without politically imploding.

More Cabinet resignations would probably tople May, leading to a Tory leadership contest with just months left before the cliff-edge of no-deal. It is the behaviour of a party which is simply unfit for government, failing at even the most basic possible level of what it takes to run a country.

But even if May were to somehow survive, she would almost certainly be unable to get that deal through parliament, opening up an abyss of chaos in which Remainers and Brexiters fight for a second referendum versus a no-deal exit.

If she did somehow miraculously get it through, it would create a kind of comatose state of perpetual failure for the country.

In a debate about trade-offs between trade and control, May has somehow managed to end up with neither.

This is a result of her obsession with ending free movement on the one hand and her commitment to the frictionless border on the other. The former meant she couldn't hug Europe tight and the latter meant she couldn't push it away. So now she ends up shackled, but in a way which still inflicts serious economic pain. When people looked at potential models for Britain after Brexit they spoke of Norway and Canada. Precisely no-one said Turkey, but that is basically what she has come back with.

And even after all that, the deal still introduces checks in the Irish Sea, in the form of animal product inspections and other demands. The backstop's two-level structure keeps the UK in the customs union and Northern Ireland in the single market for goods. May has essentially signed up to exactly the terms she previously said no British prime minister would ever countenance.

Her priorities have been wrong-headed, her appointments catastrophic, and her strategies unsound. She had a poor hand and she played it badly. But at least she has tried to do something. The ministers resigning now are worse. Their irresponsibility is unparalleled in recent British history. They have demanded the impossible and then left in outrage when that is what it turned out to be.

But ultimately it's all shades of grey. There is one name for all these indignities, whatever form they come in, and that name is Brexit.

It started this. It caused May to invent her tragic red lines. It motivated her dimwitted secretary of state. It drove the UK to waste two and half years trying to secure a situation which is worse than the one it had at the start of the process. It tore the two main parties apart. It reduced Britain to an international laughing stock. It is now threatening to put us into a subservient position with an institution we used to be a leading member of. It is threatening the quality of life of countless people in this country. It is simply a patriotic outrage.

How many times must it be said? This is the worst idea which has emerged from mainstream British politics in our lifetime. The puzzle cannot be solved. Whichever angle you look at it from, it creates the same outcome. It is a travesty of logic and decency. The fact that anyone can seriously pretend otherwise says more about their psychology than it does about their politics.