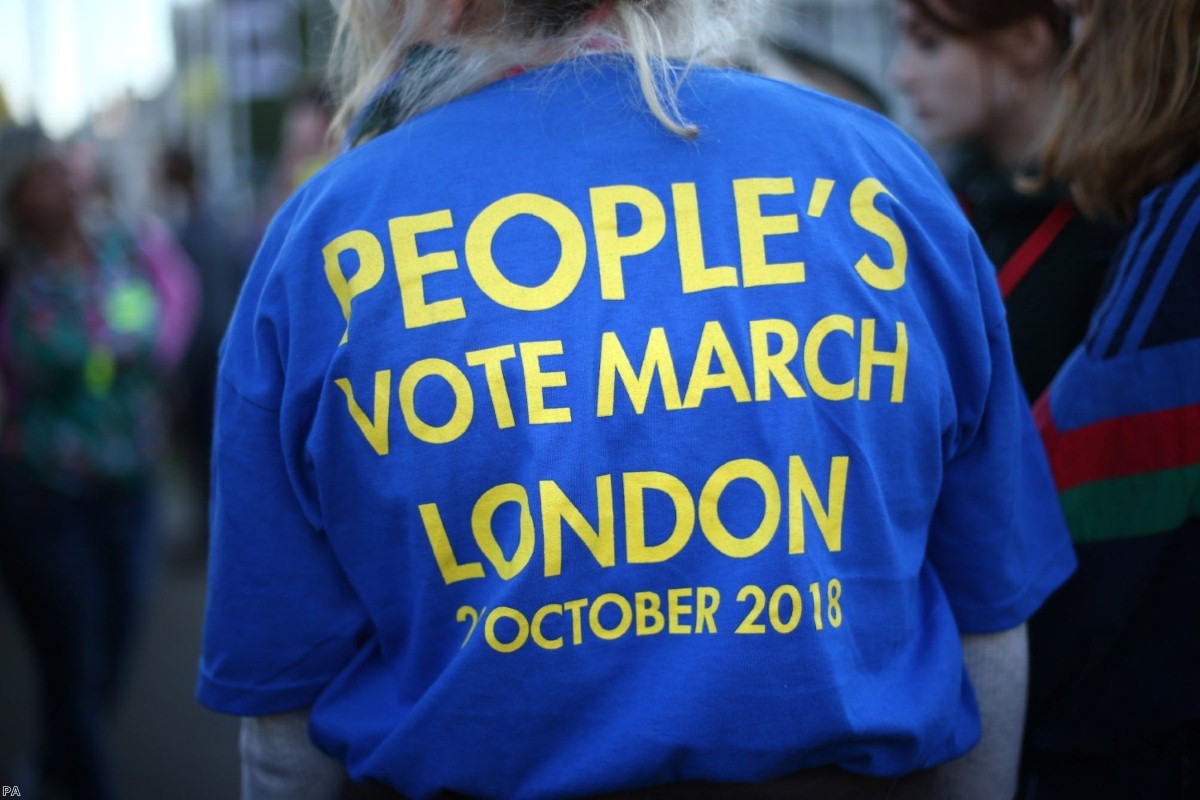 The political system is desperate to ignore last weekend's People's Vote. No-one wants to talk about it. The government is implacably opposed to the idea. Most MPs believe the decision to leave the EU is morally unchallengeable. The BBC has adopted the same stance, as have most newspapers. The very idea that people could think again is all-but excluded from polite society. It is borderline taboo.

But the scale of the event on Saturday made it impossible to ignore. At around 700,000 people, it may be the second largest demonstration in British history, after the Iraq war demo in 2003. The sight of a seeming mass of humanity snaking its way from Hyde Park was astonishing.

Corbyn supporters online treated it as some kind of reactionary bourgeois tea party. Brexiters sneered that no matter how many people attended it was fewer than those who voted Leave.

But none of that criticism made an impact. Anyone with political judgement could see that something remarkable was happening. A new constituency was making its voice heard. A political grouping was finding its voice. That voice may or may not be enough to stop Brexit, but once movements get this level of support, once they are able to mobilise hundreds of thousands of people to act despite considerable inconvenience, they become a force to be reckoned with. At some point, that voice will be articulated at the level of policy.

It's common in British politics to state that protests never achieve anything. Probably it comes from history. The French, who treat demonstrations more seriously, have the national memory of the crowds – the sans-culottes – during the Revolution directing events.

The English constitutional revolutions of the period are considered an elite affair, both in the Civil War and the Glorious Revolution. But it's a misreading. The start of the Civil War was hugely impacted by Anti-Laudian protests in London, breaking out as a response to radical pamphlets by writers who would later congeal as the Levellers. The New Model Army's control of London, and eventually parliament, at the end of the war, was a reaction against pro-royal protests, which at one stage broke into parliament, humiliated MPs, and forced them through the threat of violence to sign whatever laws they wanted. Protest – some of it heroic, some of it ugly – is as pivotal to British history as it is anywhere else, it's just that we never talk about it.

You shouldn't use Marxist phrases unless you really, really can't help it, but the truth is there's something dialectic about the way protest works. Street politics affects high politics. They mix and then affect street politics and the process continues. It was that way with the Levellers and the Independents in parliament during the Civil War. And you could see something similar this week.

Theresa May's statement to the Commons on Brexit negotiations on Monday was constantly interrupted by demands for a People's Vote and a recognition of the march. MP after MP, on all sides of the House, stood up to demand she acknowledges the protest.

There was something slightly different about the way they did so. They seemed more confident about demanding a second referendum like they no longer shuddered at the sneering mockery which would invariably follow. And opponents of the protest were no longer able to be quite so dismissive. They were more respectful, more balanced in their opposition. The policy had not changed, but the manner in which it was discussed had.

That is how protest works. It doesn't secure things in and of itself. But it strengthens its supporters in places of power and it weakens its enemies. And that was the effect it had this week: slowly moulding the Brexit debate in a more favourable direction.

Given the deadlock everywhere else, it was startling to see some part of British politics with a spark of life.