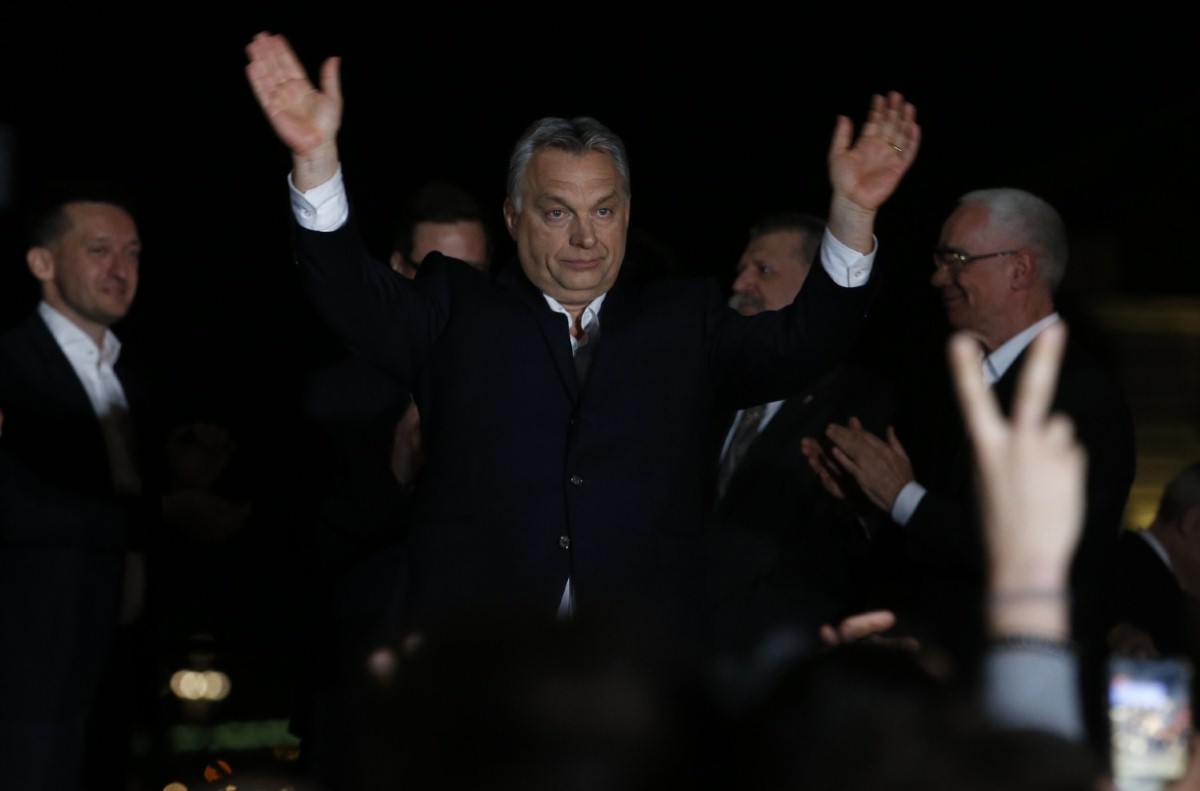 Hungary is the litmus test of illiberalism. It is the logical end point of every authoritarian fantasy playing out in Europe and America.

Yesterday, Viktor Orbán's hard-right Fidesz party won a landslide victory in the country's general election. It won it by focusing relentlessly on immigration, which Orban brands "a poison", pushing a nakedly anti-semitic narrative, and attacking the EU.

Opposition parties "want to take away our country", Orban told supporters in a final pre-vote rally last week. "Europe’s leaders together with a billionaire speculator [a reference to George Soros] don't want to defend the borders, but want to bring in the migrants, that's the truth."

A party official told Politico's Budapest correspondent: "It is simply the fear of migrants. Fidesz did a single-issue campaign and it was successful."

When the correspondent announced they were transferring to Brussels they received an email saying: "Thank you God that this filthy Jewish whore is leaving Hungary." It is typical of the type of harassment and abuse you now see in the central European state.

There are days when I really just wish I could stop checking my emails. Guess the end of the election campaign is not bringing about end to harassment.
"Thank you God that this filthy Jewish whore is leaving Hungary." pic.twitter.com/YlWb8zh8Yh

This is not the behaviour of fringe elements. The anti-semitism is spread consciously and is pretty explicit. "We are fighting an enemy that is different from us," Orban said last month. "Not open but hiding, not straightforward but crafty, not honest but base, does not believe in working but speculates with money, does not have its own homeland but feels it owns the whole world."

Liberals in Britain, no matter where they are on the political spectrum, should look very carefully at what is happening in Hungary. It is not enough to say, as Brits often do, that it could not happen here. Many things are currently happening here that we previously insisted never would. Every constituent part of the Orban programme exists here: the anti-semitism, the focus on Soros, the relentless fear-mongering about immigrants, the demonisation of the EU and its institutions, the attacks on Islam, the undermining of an independent judiciary, and, most of all, the widespread conspiracy-squint – the idea, popular on left and right, on almost all matters of political consequence, that shadowy and powerful forces are undermining the people's will.

This is not an attempt to link Orban with Brexiters. Most Brexiters in this country would be appalled by his rhetoric. The more respectable parts of the Brexit programme, such as the ministers in government who campaigned for Vote Leave, would never repeat his slurs and nor would they think them privately.

But let's not pretend that it is just a fringe issue either. Much as the Tory ministers pushing through Brexit would love to disassociate themselves from Farage-orientated Leave.EU, they could not have won the referendum without its support. The demand that we return to an era of borders, the relentless focus on immigration as a social ill and the chiseling away at support for international institutions were all vital to success and a core part of the Leave.EU armoury.

Now that the referendum was won on those terms, there is a political demand that it is conducted in a way that at least partially satisfies them. After all, the only reason Britain is threatening its economy by leaving the single market is so it can stop freedom of movement. The entirety of our current predicament stems from a frenzied desire to 'tackle' immigration. This is the result of a single-issue focus identical to the one deployed by Orban.

Leave.EU was, of course, quick to voice its support for the Hungarian prime minister last night, as was Marine Le Pen in France and Geert Wilders in the Netherlands. Donald Trump's former right-hand man, Steve Bannon, is also an admirer, calling Orban a "real hero".

Viktor Orbán's huge election success is more proof that the peoples of Europe are sick of the EU & their disastrous migration policies. He's more popular than ever after standing up to the dimwits in Brussels – keep fighting, Viktor!

These are all allies of Nigel Farage. Farage himself demands the Hungarian goes further. In February he backed the focus on Soros, calling him "perhaps the most dangerous man in western democracy". Then he proclaimed: "Keep going Viktor Orban". Farage is a constant voice in the British political landscape. Barely a day passes without us seeing him on the TV or radio. The media follow his every move and cover his every photo opportunity.

But the Orban contagion cannot be quarantined to just Farage and his followers. It has spread into the rest of our political system. The Brexit project to remove Britain from the European Union is a gift to the continent's authoritarians. As much as European officials try to put a brave face on it, it is the most signficant destabilising moment the system has faced.

Nor can the rhetoric of the respectable elements of Brexit be separated from the unrespectable elements as cleanly as people like to pretend. Not so long ago the Telegraph was publishing a front page piece – by the prime minister's former chief of staff – about a "secret plot" to thwart Brexit orchestrated by Soros and the Mail was calling judges "enemies of the people", which is precisely the type of rhetoric Orban uses to undermine an independent judiciary.

Again, most Brexiters are not Orban supporters, just like most are not Trump supporters. But that does not negate the fact that their project gives succour to the worst forces in world politics. It uses the same rhetoric to secure similar political aims while blaming the same enemy. There is no getting around this fact.

Similarly, Jeremy Corbyn's Labour party is a million miles removed from Orban's proto-fascist nationalist lunacy. But events within it carry echoes of those in Hungary. The sluggish response of the leadership to claims of anti-semitism, and the irresponsible attitude of parts of the membership, bear comparison.

Take one incident from last week. Bristol West MP Thangam Debbonaire was forced to fight off a motion against her because she had attended a protest against anti-semitism. It was a spectacle which a few years ago would have been unthinkable: a Labour MP attacked by elements of her local party for attending an anti-racist demo.

She won by 108 votes to 85 – by no means a wide margin of victory – and was subjected to shouts and heckles from some of those attending the meeting. Eventually she was forced to withdraw.

"Unfortunately, my attempt to explain my attendance at the rally was shouted down and no attempt was made to stop this," she said in a statement. "I therefore left the meeting as it was unproductive."

If you care to listen to them, many British Jews are expressing a horrifying thought. They are starting to feel afraid. As columnist Howard Jacobson wrote over the weekend: "It is as though I now live in the shadow of an unseen enemy."

Liberals everywhere must recognise what is going on. They must see what they are fighting against and the moment in history in which they are living. They must recognise the signs – the hatred of the 'other', the demand for loyalty to the 'will of the people', the constant low-level hum of conspiracy, the attempts to destabilise institutions and the rule of law. They must remember where it is that this road leads.

In recent months, many liberals have started to tune out of politics altogether. In a sense, you can't blame them. Brexit is a fundamentally very boring issue – a technocratic conundrum squeezed into an identity politics straightjacket, a constant churn of processology and esoteric trading jargon. No sane person wishes to engage with it. There are seemingly no political vehicles to express their voice, except for the almost daily stillborn attempts to set up a new centrist party, which seems a solution to the wrong problem. The issue is not about right or left, it is about liberalism versus illiberalism.

Where there is so little hope, and so few ways to feel like you can make a difference, it becomes tempting to just tune out. Then the siren voices take over. They tell you that you can somehow stop illiberalism by placating it: just give in a bit on Brexit, a bit on anti-semitism, a bit on conspiracy theories, and it'll all go away. But this is false. There is no way to kill a beast by feeding it.

Look to Hungary. The danger is real. It is happening there. It can happen here too.