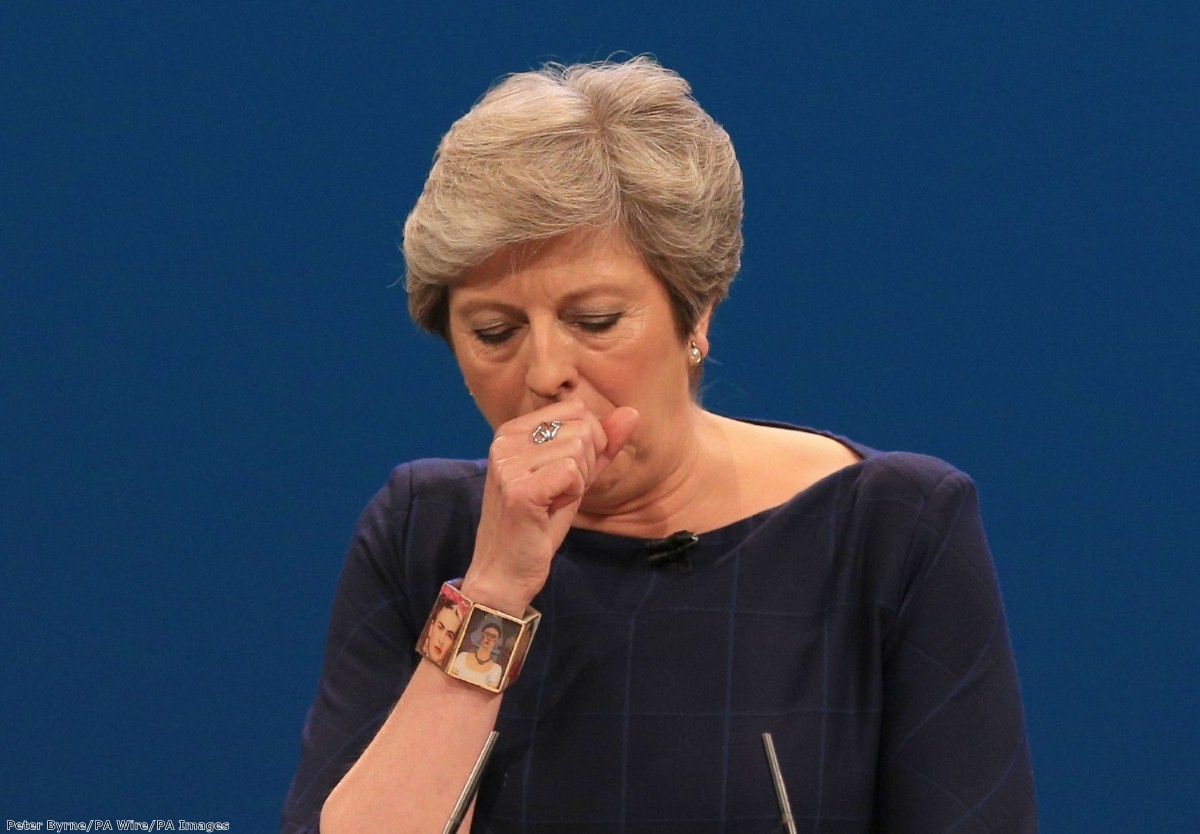 The day Theresa May choked on her own words

It was a speech which won't be forgotten. Years from now, they'll say a conference speech was bad, but it wasn't as bad as that time Theresa May was broken by a coughing fit. "Many pay little attention to conferences and gatherings like this," the prime minister said at one point. She better hope she's right. This speech was every exam anxiety dream wrapped up into one – the specific and unique horror of falling apart right at the moment you need to perform, expressed on the largest political stage available.

She'd started well. But after a few moments you realised that every sentence was followed by a little cough. These grew in frequency and intensity, like they had started coming from her stomach rather than her throat. It didn't bode well.

Then, out of nowhere, a protestor sprang up trying to pass the prime minister a P45. Security got to him and led him out, but not before photographers snapped a photo of him giving Boris Johnson the thumbs up.

In case you missed the moment that Theresa May was interrupted… #cpc17 https://t.co/F2WzwgiPf6 pic.twitter.com/dtTz3D3xuJ

May struggled to deal with that moment of short-lived chaos, but worse was yet to come. As she went on, the cough grew stronger and stronger. Her voice strangled itself until it was little more than a fraying bit of string, one or two words away from breaking altogether. You could see the audience slump further and further into their seats. No-one could have felt anything but pity, no matter what you thought of her policies. It was too human – too universal – a fear to react any other way.

Finally it broke. The audience rose to give a standing ovation to give her time to get water and recover. Home secretary Amber Rudd snapped at Johnson in no uncertain terms to stand up. The chancellor Philip Hammond stepped forward with a cough sweet. It was like an HBO box set in real time, an abysmal family drama played out wherever you looked.

Amber Rudd telling Boris Johnson to stand for May pic.twitter.com/VGYeb5CroR

May managed to laugh it off with a pretty good gag about the rarity of a chancellor giving away something for free. But it only saved her for a few minutes. Soon, the cough was back. And again her voice would dry up and give out. More standing ovations were needed. Countless lines clearly written to give punch to the speech – to save her career, really – were lost in the mere strain of being able to speak them. It was an epic of awkwardness, an Iliad of social embarrassment.

On and on it went, the cough coming and going – sometimes conquering her, sometimes being held at bay, but always there. It was impossible to follow the content very closely because it had become, in truth, the story of a cough. May was just a bit part in her own speech. The leading role was played by her affliction.

Big colourful moments like this only matter when they seem to confirm something we already thought to be true. The apocryphal tale of Peter Mandelson confusing mushy peas for guacamole entered popular mythology because it represented what people anyway thought about his class of politician. Gordon Brown moaning about Gillian Duffy permeated because it reflected our assumptions about how politicians talk about the public when they're behind closed doors. Ed Miliband eating a bacon sandwich struck a chord because people already thought he was an out-of-touch weirdo who didn't do ordinary things.

May had a problem before this conference, which is that people kept feeling sorry for her. Once upon a time she was the Iron Lady Mark 2, but those days have passed. Instead, we got the Maybot, unable to answer questions, ridiculed in the press, disrespected in parliament, undermined at Cabinet. Every interview, you'd hear the same thing: 'I am starting to feel sorry for her.'

That phenomenon reached a crescendo in the hall. They were literally giving her a standing ovation to give her time to recover. They cheered lines about fighting through. They were supportive. Kind. Like a parent clapping their child when he falls over during the school play.

The truth is they pitied her. You could see it on the faces in the hall. Everyone did. Even supposedly hardened journalists. And pity is death for a party leader. It is death for a prime minister. And it is most certainly death for a politician who modelled themselves on a hard personality making hard choices. The bloody difficult woman has come firmly and completely undone.

But there was something deeper going on than just that sense of confirmed suspicion. At certain moments, it felt like we were watching a morality play.

Last year, May came on stage and made one of the most appalling speeches I have ever heard from a British prime minister. It was the 'citizens of nowhere' speech: the moment Ukip was picked up, dusted off and inserted into the heart of the Conservative party. Reactionary nativist politics were installed in Downing Street.

A little later, she overplayed her hand. The snap election was a disaster and she lost her majority. If that had not happened, she would have been in the hall making another speech like last year's. But it did, so instead she had to pivot towards One Nation Conservatism. The MP introducing her sung the praises of a country where you can go from immigrant to member of parliament in one generation. May celebrated people of many creeds coming together. She spoke of openness and tolerance.

Life is too short to worry much about hypocrisy in politics. There is too much of it. But it reached critical mass in this speech. At some points it was almost unbearable. She said the Tories were the "voice of the voiceless", apparently unaware of the people who rot without trial in her immigration detention centres. She spoke of guaranteeing EU citizens' rights, even though she could have done this at any stage of her premiership and failed to do so. She talked of preventing "nationalism" from breaking the Union, despite having ignored Scotland's vote to stay in the EU and threatened Northern Ireland with a customs border.

For years May's conference speeches have been deeply authoritarian. Now she had to come to the hall to praise liberalism, having discovered that her Ukip election strategy does not work. And the words literally choked her. She could barely get them out.

If you'd written it as the final scene in a political drama your editor would cross it out and tell you it was too on-the-nose. And yet we watched it happen, for a long, seemingly endless hour in Manchester. Years from now, the people who watched it will remember. And no matter how badly a speech goes, they'll say: But it's not as bad as May in 2017.