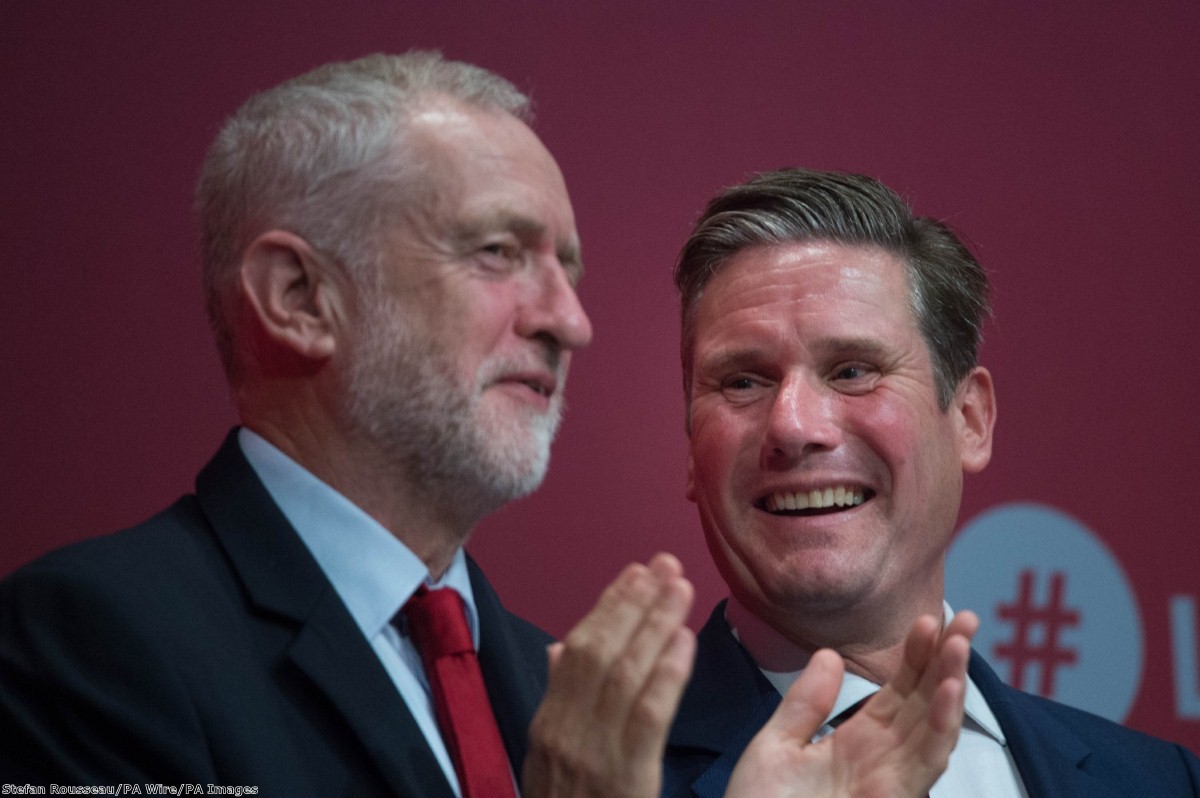 One of the strange new communication techniques in Brexit Britain is for a politician to give a speech containing huge amounts of waffle except for a couple of very specific sentences right in the middle. Theresa May did it in her Florence speech last week, when she framed two crucial passages – one on transition and another on payments – with an awful lot of nothingness. Now shadow Brexit secretary Keir Starmer has done the same at the Labour conference.

Starmer went on about how lovely Labour was and how it would pursue a lovelier Brexit than the Tories. And then, rather suddenly, there came a crucial section.


"Subject, of course to negotiations, remaining in a form of customs union with the EU is a possible end destination for Labour. We are also flexible as to whether the benefits of the single market are best retained by negotiating a new single market relationship or by working up from a bespoke trade deal."


We've heard similar things from Labour before, but the passage was much more pointed and specific this time.

The sentence on the customs union means that Labour is almost certainly open to staying in it. Starmer is using the phrase "in a form of customs union", because any arrangement keeping Britain in the customs union after Brexit would be a new form of it. The customs union is really an EU-only arrangement. Turkey's relationship with it is on a lower strata. The EEA countries – Norway, Iceland and Liechtenstein – are not in it. Something would need to be arranged to create a category for Britain to fit into. This allows Starmer to use the phrase and maximise the number of outcomes it might refer to. But given that it lays the door open for customs membership and that there are few political disadvantages and many advantages to Labour for doing so, it seems very likely that they'd pursue full membership identical to what we have now.

The comment on the single market is also interesting. The word "new" is doing a lot of work in that sentence. Does he mean it would be new for Britain or new for the world? If it's just 'new for Britain' he could be referring to the EEA agreement enjoyed by countries like Norway, which would basically keep us in the single market, with exceptions for agriculture and fisheries. If he means 'new for the world' he could be referring to some kind of new bespoke EEA agreement, where Britain tried to secure exceptions for other parts of its economy, like retail.

Probably he is thinking about the latter. It's impossible to really know, because Labour's Brexit message is cloaked in secrecy and purposefully broad language, but this is the most likely goal. Whether it is done, as Starmer says, via a free trade deal or through a unique EEA-style treaty is ultimately immaterial. The same consequences will be involved. You will need to harmonise your economy with the EU's in high value areas, like cars, banking, insurance and tech. There will be no taking back control there and Britain will be unlikely to have any say over regulations it must adopt. In exchange, it will be free to do what it likes in other areas.

The bespoke nature of the deal might allow British negotiators to secure some kind of variation on free movement. To be clear: this would not be extensive. You would still need to take free movement. But perhaps, if they were really successful, they could make it conditional on a job offer or something. Maybe they could put some kind of local preference for job offers, in a similar manner to what the Swiss have. It's all pretty piddly stuff, most of which is available in the existing EEA agreement, and also completely ridiculous, but that is where the domestic debate is and Labour will feel they need some kind of offer.

Most trade deals are far, far less ambitious than the sort of thing we're talking about here. If they were to offer "the benefits of the single market", they would also involve accepting free movement. So again, the distinction is mundane and uninteresting. In this kind of project, the words 'relationship' and 'trade deal' are really just tribal signifiers rather than something with concrete political ramifications. They involve the same concessions and aspirations.

This type of deal would not be impossible. A competent negotiating team, working to a realistic timetable, could probably do it. Labour has been commendably sensible on the timetable. They are willing to take all EU rules for the transition and accept that it might go on for a very long time indeed – basically until the new arrangement is signed off.

Some commentators have suggested that Labour and the Tories basically have the same Brexit policy following the Florence speech. It's true that they are increasingly on the same page about transition, but they're increasingly on a different one about where they want to end up.

In both cases, there is no single position: there is a spectrum of positions. This is partly a result of there being different fiefdoms in both parties. In the Tories, you've got David Davis running the official team, Philip Hammond running the softer Brexit team, Liam Fox running the low-regulation Atlanticist team and Boris Johnson running the Boris-Johnson-for-PM team. In Labour you have Jeremy Corbyn and John McDonnell running the eurosceptic Trotskyist team, Keir Starmer running the let's-see-what-we-can-achieve-while-staying-on-the-right-side-of-the-leadership team, Heidi Alexander and others running the pro-single market team, Caroline Flint and others running the anti-free movement team and Kate Hoey running the lonely and baffling Ukip-in-Labour team. Not only could different teams take over the party – especially in the Tory case – but they are all fighting to stamp their demands for the final Brexit position on the leadership.


Despite this uncertainty, the Labour proposals are pointing in a different direction to the Tory proposals. The Labour offer runs from full single market and customs union membership to a sectoral harmonisation arrangement, of the type described above. The Tory offer runs from a sectoral harmonisation arrangement to no-deal. It goes without saying that the Labour spectrum is superior.

What it does not offer, however, is clarity. Starmer, who to his credit has done very good work getting Labour into a more sane position, still had the gall today to criticise the Tories for "constructive ambiguity" just before engaging in it himself. It is not useful to dwell on hypocrisy in politics, because there is so much of it and life is short, but it was hard not to at least scoff at this.

The ambiguity has another pernicious quality beyond lack of consistency. It is fundamentally undemocratic. We shouldn't have to sit here decoding his terms to try to work out what kind of Brexit Labour is considering. We shouldn't have to see Momentum activists taking Brexit off the floor of conference because it might embarrass the leadership to be forced to stick to one position. We shouldn't have to listen to Sunday morning interviews with Corbyn and McDonnell which are kept purposefully vague so that different parts of their political coalition can project incompatible hopes onto them.

We're dealing with issues which will have huge effects on people's lives. They deserve to be able to follow this debate without understanding all the ins and outs of European trade law and the implications of Starmer using very particular words. The manner both parties are talking about Brexit – using euphemisms and open-ended statements – serves to take a highly emotional political issue and make it comprehensible only to a small group of geeks. This serves their political purposes well but it does a disservice to voters.