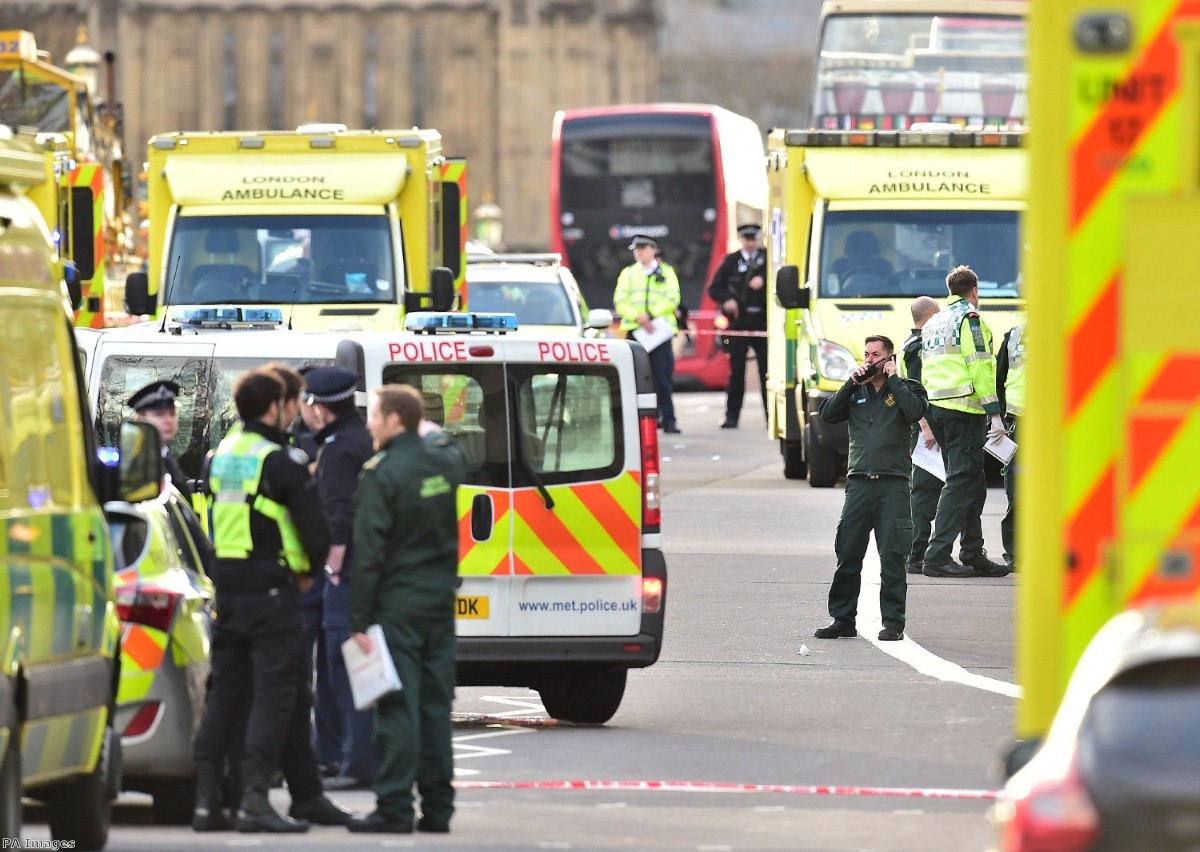 It's funny how terrorists and the culture-war right share the same narrative. From different sides of the battleline, they both speak of chaos and a global battle between the West and Islam.

In the wake of the terror attack in Westminster yesterday, Katie Hopkins jumped onto Fox News to insist that "people are afraid and people are not united". Nigel Farage went on the same channel to blame "uncontrolled immigration from Middle Eastern countries". Former Ukip donor Aaron Banks made much the same point, portraying the country as out of control due to immigration. Former EDL leader Tommy Robinson rushed out to Westminster to pin the blame on Islam.

.@Nigel_Farage: “If you open your door to uncontrolled immigration from Middle Eastern countries you are inviting in terrorism.” #Hannity pic.twitter.com/p9QQgAkpbD

.@KTHopkins on UK terror: "People are cowed. People are afraid. And people are not united." #Tucker pic.twitter.com/QNFr4cY996

Teresa May was Home Secretary for 6 year when over a million illegals were allowed into our country. I don't think I've ever felt more sick. https://t.co/K9wMxQfb3f

Will be on Tucker on Fox News at 9 AM EST to discuss the terror act in London. "One man can shut down a city.."

The irony is that yesterday actually showed that London responds very well to terror attacks. There was not, as Hopkins implied, panic on the streets. People went about their lives with considerable calm given the severity of the events. The terror attack did not put the fear into the public that she seemed to feel. Hopkins clearly has a very timid disposition.

You can look at the systems put in place to protect people in the event of an attack. As soon as it started, the systems came online. Parliament was locked down. MPs, journalists and staff mingled together in halls, or were shut in their offices. The prime minister was rushed towards safety. These actions are the result of careful preparation, not hysteria or emotional outbursts. They are about diligent planning, rather than hysteria.

Londoners will never be cowed by terrorism. pic.twitter.com/LTLhgZ7OLQ

It also showed the emotional and moral resilience of our society. When the attacker was shot yesterday, he received the same medical attention as the police officer he killed. That felt strange for some. It is a testament to the civilised nature of this country that there is no judgement on medical need in emergency service response. The worst of us are treated along with the best of us.

But it is not just about principles, it is also practical. It is a shame the attacker could not be saved. If he had been, we could have got more information from him, found accomplices, learnt more about his methods and put him on trial.

Hardly anyone, online or on the street, used the events of yesterday to blame Islam or immigration for what had taken place. People know that no population can ever be really controlled. There is no evidence the attacker was an immigrant, but even if he was, there is no way to stop these sorts of events short of stopping all immigration. Very often, as in the attack on Jo Cox during the Brexit referendum, the attackers are British citizens. We can't rule out their attacks without locking everyone in their homes every day.

In any society, there will be madmen and there will be thugs and bastards. There is no cure for this. All we have in our defence are the systems we put in place to stop them and the attitude we bring to our society. Do we seize on these events to further our political agenda? Do we emphasise the same narrative as the terrorists, of a culture war between societies bringing our country to its knees? Or do we enact the systems we have in place, carry on without fluster and abide by our values? The reality is that most Londoners have done precisely this.

Yesterday's attack was a tragedy and an outrage. But the response to it should reassure us about the nature of our country and the quality of the people in it.