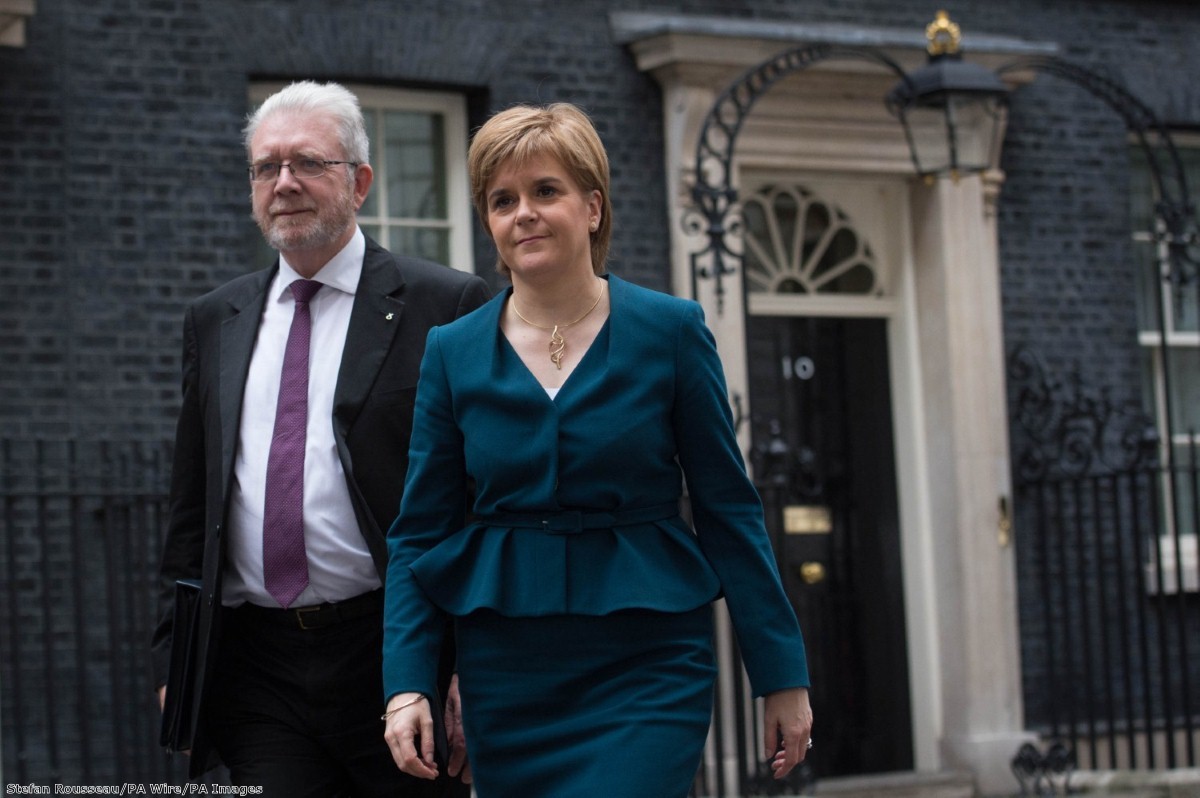 If Nicola Sturgeon has her way, there will be a second referendum on Scottish independence sometime between autumn 2018 and spring 2019. On the week that Article 50 might be triggered, we are now seeing, in concrete terms, the reality of what Brexit entails. Just before the UK leaves the EU, Scotland may leave the UK. By April 2019, we could be just England, Wales and Northern Ireland, outside the EU. We are witnessing the first active dismemberment of a country against itself.

It is perhaps too much to ask that leading Brexiters take a look at themselves this morning and feel some uncertainty over what they have done.

None of this had to happen. It was clear on the morning of June 24th that the Scottish situation was delicate. Scotland had voted Remain, England Leave. It needed to be handled carefully. Instead, Theresa May unilaterally decided to leave the single market, against Scotland's wishes.

There was no reason to do so. Leaving the EU does not mean you are leaving the single market. We could have joined the British-created European Free Trade Association (Efta) and through that joined the European Economic Area (EEA) with Norway and others. A country which voted so narrowly to leave and which had component nations who didn't support the outcome might be expected to follow that route, simply on the basis of democratic responsibility. Instead, May followed the most extreme interpretation possible. She is a hostage to the demands of the hard Brexit front, in the press, Ukip and her own party.

The same excuse does not apply to the commentators and MPs who backed her – including Labour MPs and people like Vince Cable, liberal and left-wing commentators seduced or bullied into parroting the 'will of the people' mantra. They helped consolidate the extremist consensus.

The repercussions of this consensus are huge: a hard border in Ireland, a significant and sustained deterioration in Britain's economy and its status in the world, regulatory chaos, severe reputational damage, unemployment, falling societal standards, the list goes on.

One of those repercussions was always Scotland. By ignoring Sturgeon, May cemented the political narrative the Scottish first minister deals in: she showed Westminster to be indifferent at best and actively disrespectful at worst to the Scottish people. She showed they had no control over their destiny in the UK.

Even tactically, May was extraordinarily inept. She held a strong negotiating advantage in being able to block the devolution of EU powers on agriculture and fisheries to Scotland. A bit of carrot-and-stick could have proved useful here. Even while pursuing hard Brexit, she could have remained open to Scottish plans to stay separately in the single market. She could have offered a role for Scotland in the great repeal bill process with real legal powers – not just a consultation exercise. And for the stick she could have threatened to block Brexit-related devolution.

Instead, it was stick, stick, stick. Nothing more. In a recent PMQs, the prime minister answered a question from SNP Westminster leader Angus Robertson which suggested she was intending to block those powers going to Holyrood come what may.

So what option did Sturgeon have? Westminster commentators, including myself, misread her incentives. We pointed out that the UK single market is worth more to Scotland than the European one, that Brexit therefore made the arguments for independence harder rather than easier. Support for independence remained stubbornly lacking at around the 45% mark. Surely Sturgeon would not want to be known as the person who lost the chance of Scottish independence for a generation?

No, she wouldn't. And those economic arguments remain firm. Independence will not be easy to secure. But Sturgeon's incentives were not that simple. She was under extraordinary pressure from idealists in her own party to call a new referendum. If she didn't, she would be remembered as the nationalist leader who watched her nation be humiliated, ignored and then made poorer by a policy her people did not vote for. If May had allowed her to even look as if she was being listened to, Sturgeon would have had an out. But she did not give her one. And now here we are. Witnessing what may just be the break-up of our country.

May can try to block what is happening. She doesn't have to allow this. But doing so will go directly against her own arguments about thwarting the will of the people made in service of Brexit. It will further poison relations between England and Scotland. So even if she succeeds in blocking it, it will merely make the referendum harder to win when it happens later.

This is on Brexiters. This is their responsibility. It's not just the result, although it was clear during the campaign this was a likely possibility if people backed Leave. It's about what has happened since the vote. This is where Brexiters' arrogance, their refusal to listen to counter-arguments, their extreme agenda, their bluffing about economic self-harm, their strategic incompetence and their grotesquely irresponsible behaviour has got us.

A soft Brexit could have been pursued. A compromise position could have been developed in which those uncomfortable with Brexit were listened to. They were not. And this is the consequence.