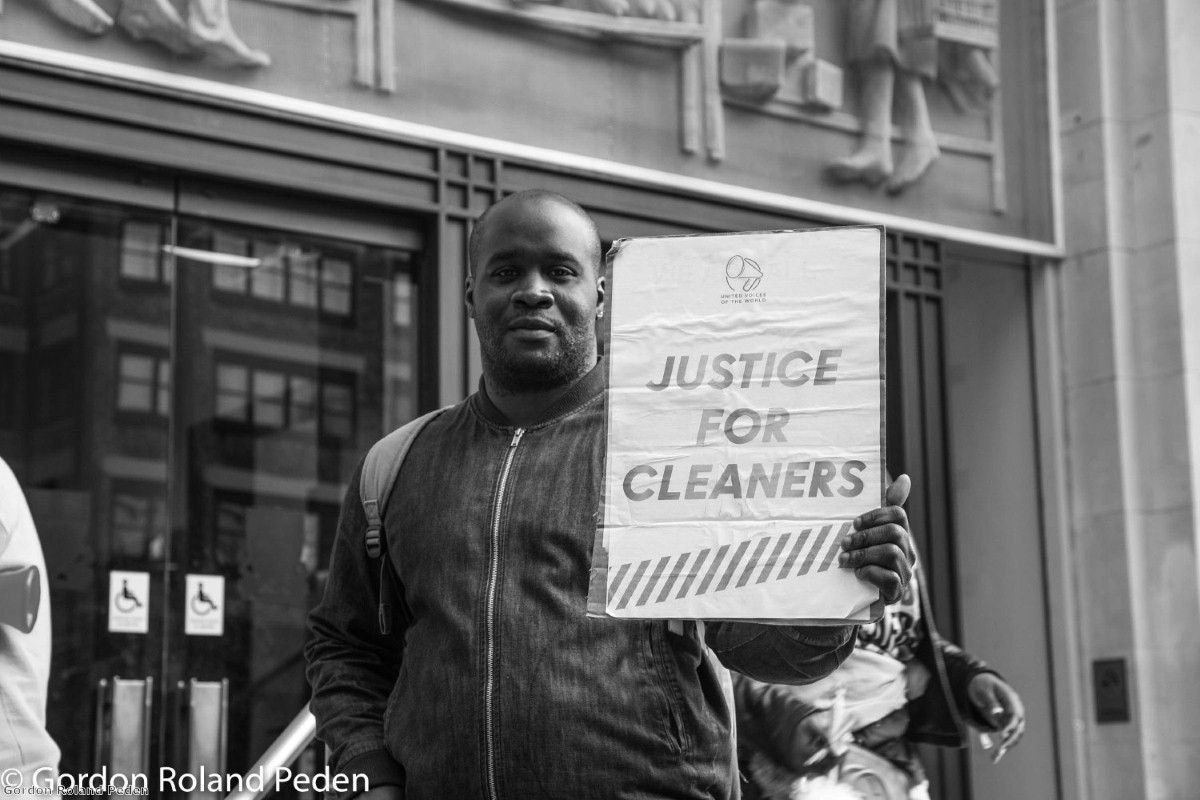 Striking cleaners were demonstrating for better conditions on a university campus last week when a student marched over and trampled on their "We are not the dirt we clean" poster. Maybe it was just the act of a young person frustrated by the disruption the strike was causing, but for those cleaners it sent a very clear message: you are beneath us.

The outsourced cleaners working at the London School Economics [LSE] are not asking for a lot. They just want the same terms and conditions as those employed directly by the university. The same sick pay, pension deal and maternity pay.

You would think that an establishment which boasts of its "cutting edge" research into inequality would be willing to agree to such fair demands. Or that at the very least the students and academics at the university would get behind the cleaners' cause. Some have, but nowhere near enough.

Could it be because these low-paid, migrant and BAME workers are seen as being below the people who teach and study at the LSE?

On Wednesday left wing columnist Owen Jones withdrew from a debate at the university in solidarity with the cleaners. The response to his decision was telling. Among the people thanking him for his support were some who were disappointed not to hear him speak. In fact they seemed far more concerned about that than they were over the plight of the cleaners.

"Quite annoying for the people that have turned up"

"Maybe Owen could reimburse everyone who made the trip just to see him?"

"I travelled one hour to see you and got soaking wet. Very disappointing."

It's not unfair to presume that those who were so keen to hear Jones speak are probably on the left themselves. Yet faced with an issue of low-paid workers being treated unfairly, there was little concern.

The United Voices of the World union (UVW), which represents many of the cleaners, recently began to coordinate its action with that of the Independent Workers Union of Great Britain (IWGB) which represents security officers involved in a dispute at the University of London (UoL).

While protests took place at the UoL this week, the actor Jeremy Irons – who'd been due to speak at the university – stopped to talk to the striking workers.

"Your point is made," he told them. "We have your leaflets, we understand where you are coming from. We wish you every success but please don't keep shouting. That's not the way we do it here."

In other words: 'You've had your say, now be good chaps and quieten down.'

This silencing of working class voices happens day in day out across the country. The only time the media is interested in hearing from them is when they want to portray them as racist idiots or benefit scroungers.

Long gone are the days that a manual worker might end up representing their local town in parliament. Now, posh middle class candidates are flown in to areas that they have no real interest in understanding.

The current BBC drama Three Girls, which tells the story of the victims of grooming and sexual assault in Rochdale, shows very clearly that it was the victims' class that prevented them from being listened to. The authorities saw these girls as worthless, as asking for it, as more trouble than they were worth.

All too often, the discrimination faced by working class people in their daily life is hidden away. It takes place in a council housing office or a warehouse tucked away on some industrial estate. But on the campus of the LSE the true ugliness of the British class system is being played out for all to see. The question is: does anyone care to look?