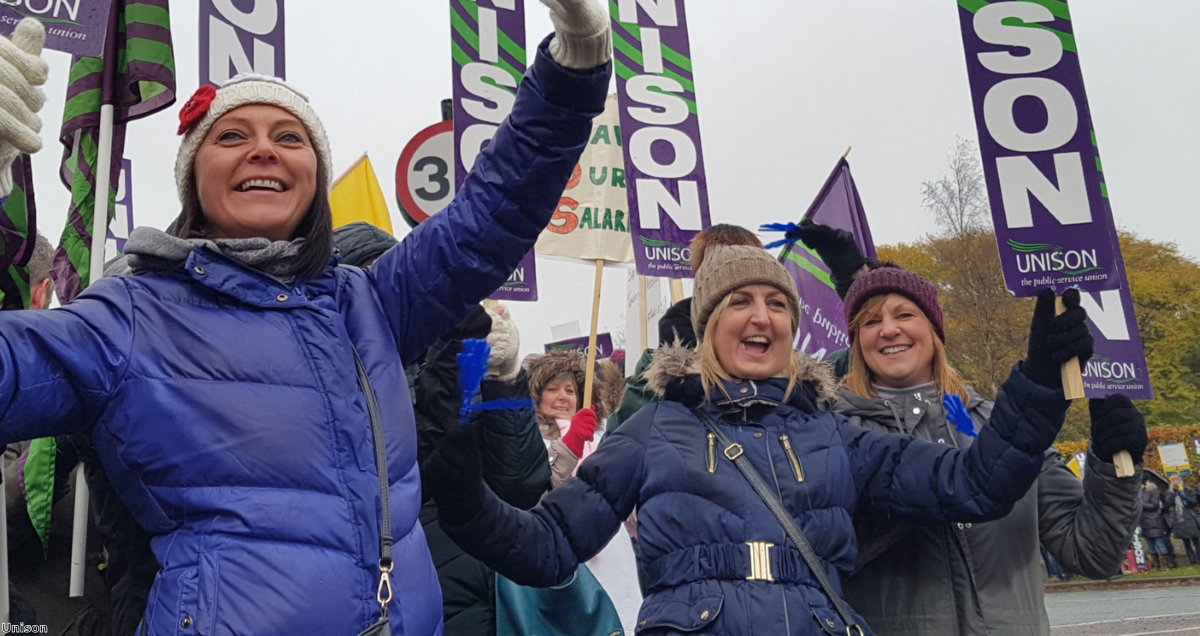 The women fighting back against unequal pay

Normally when we think of unequal pay it is in relation to a man and woman doing the same job for a different wage. But it can also be about how we value the work women traditionally do.

Care workers, cashiers, and cleaners are often among some of the lowest paid people in the country. When I left school, I started working full time in a residential home for the elderly. I was 16 and didn't expect to get paid very much, but I was struck by the fact that women who had worked there for years were only paid a few pence an hour more than I was. These are the women who care for your parents and grandparents in their final years, who cook for them, wash and dress them, and hold their hand when they are confused or upset.

I remember myself and another carer sitting with one woman as she was dying. Every day we would brush her hair, freshen her dry mouth with a lemon swab, and just talk to her. She had no family, we were the only people with her in her last hours. And for that we were paid the minimum wage.

Of course, men do low paid work as well, but traditional male roles are usually paid better than traditional female roles. A labourer or refuse collector is often paid significantly more than a carer or a cleaner.

This week, around 1,800 teaching assistants have gone on strike in Durham over a pay dispute. Durham County Council wants to make them all redundant and then re-employ them on new contracts which their union says could see them losing around 23% of their salary.

Brrrrr #UNISON members out in force, not deterred by the cold and sleet! #ValueUs #StayWarm #Strike @unisontweets pic.twitter.com/DoGCPILSyJ

The teaching assistants are overwhelmingly female and they are already paid a modest wage, to cut it further would have a big affect on them. Many are single parents, some have spoken about finding work elsewhere, while others have warned that they won't be able to pay their mortgages.

Clips of the rally show the women, who have been nicknamed the Durham Lions, looking strong and united. But, speaking to Politics.co.uk this morning, the regional organiser for Unison which represents the teaching assistants, said that there is a sense among the women that they are not valued as much as the men.

"This is a unique dispute because it is a largely female work force," Helen Metcalfe says. "If a Labour council is willing to do this, there is a good chance other areas will do the same. It could set a precedent."

There are already similar disputes dotted around the country. Later today, care workers will stage a silent protest outside county council offices in Dorchester over plans that could see their pay cut. In Reading, the council faces a legal challenge from more than 60 women who say they have been paid less than their male colleagues. And, in Derby, there is an ongoing dispute between the council and school support staff.

We will never achieve equal pay without recognising the structural inequalities that effect so many women in low paid work. If this was another group of women who were marching through London instead of gathering in Durham, I'm sure they would have received much more attention and support from feminists and women's rights groups.

There were more than 80 picket lines yesterday morning made up largely of women who had never taken direct action before. The Durham Lions are organised and fighting to have their voice heard. Now is the time for all women who care about fair pay to get behind them.