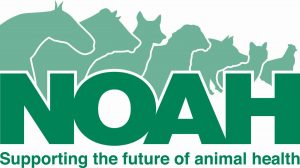 The Code Committee oversees the NOAH Code on the Promotion of Animal Medicines. It is chaired by an independent barrister, with complaints being submitted for the Committee’s consideration when a clause of the Code may have been breached. The Committee itself, comprising some 15 people, includes NOAH-member vets and professionals, as well as the independent vets, farmers and a representative of the companion animal sector.

The new independent members replace Peter Allen (independent farmer) and Andrew Scott (independent vet) who stood down from the committee after 21 and 18 years’ service respectively.

Independent members bring a valuable viewpoint, providing a different perspective and consider if other prescribers or users of animal medicines could potentially be misled by a promotion.

The NOAH Code of Practice for the Promotion of Animal Medicines works to ensure that prescribers and users of animal medicines can have confidence in the promotional information about them. All advertising is subject to the rules of the Advertising Standards Authority and the Veterinary Medicines Regulations  but, as with human pharmaceuticals, the Code means animal medicines promotions are even more tightly controlled with NOAH companies (and non-members participating in the NOAH Compendium) committing to higher voluntary standards by signing up to NOAH’s Code.

It was originally adopted in 1987 and has been regularly and rigorously updated ever since, evolving to reflect changing marketing and promotional ideas and methods. The NOAH Code is now in its 28th edition, and is available on the NOAH website www.noah.co.uk.

“Farmers and their veterinary surgeons need to be able to have trust in the information they read or hear about animal medicines. The NOAH Code enables them to have this trust: I am pleased to be part of the Committee that oversees its work. ”

NOAH represents the UK animal medicines industry. Its aim is to promote the benefits of safe, effective, quality medicines for the health and welfare of all animals.

Owen Atkinson is a RCVS recognised specialist in Cattle Health and Production. He is the owner, founder and director of Dairy Veterinary Consultancy Ltd with extensive farm animal veterinary practice experience, and some companion animal experience. He is a past Nuffield scholar on ‘The role of the veterinary surgeon in knowledge transfer to the dairy industry’ and a past Director of BCVA and education lead.

Charles Sercombe is a sheep farmer with flock of 3000 breeding sheep He has extensive background and active participation in cross industry initiatives such as SCOPs and the RUMA Targets Taskforce for Sheep. He was the Chairman of the National Livestock Board for the National Farmers Union. He has experience representing industry to senior government officials and politicians