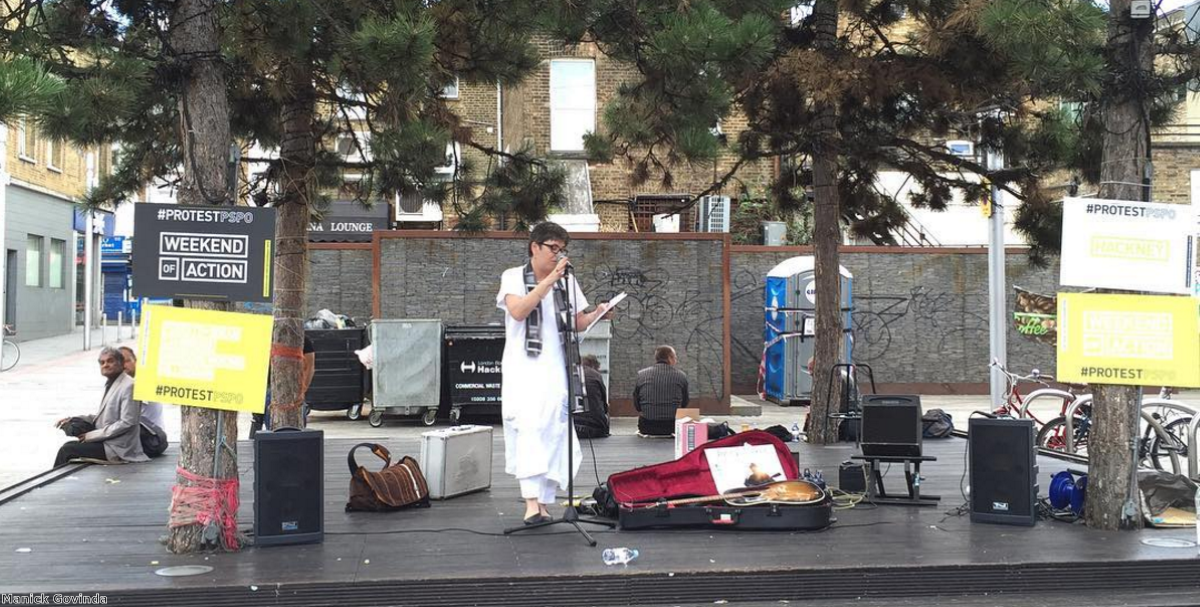 Council powers to ban gatherings of two or more people have been challenged in a wide act of civil disobedience by campaigners.

Members of the libertarian Manifesto Club met in pairs in Hillingdon on Saturday as part of a series of actions to highlight the draconian use of Public Space Protection Orders (PSPOs) by local authorities.

The orders, highlighted in a piece for Politics.co.uk on Friday, allow councils to ban activities if they believe they have a 'detrimental effect' on the local community.

Another protest over the weekend included a festival in Hackney, where the council withdrew plans to ban rough sleeping after facing criticism by homeless charities. There was also street theatre in Cambridge, where punt touting has been banned, and groups lying down in sleeping bags in Woking town centre, where a ban on begging has been implemented.

Other councils have banned activities like sleeping in an open space, swearing, and being out after 11pm if you under 18.

The Manifesto Club says that a survey it carried out in February showed that the number of orders being used by councils is increasing rapidly.

"Nobody even knows what 'detrimental effect' means. Crime has been broadened to include anything people don't like," Josie Appleton, founder of the Manifesto Club, said.

"These laws criminalise the law-abiding majority and are sterilising public spaces, while doing little or nothing to tackle criminal or genuinely nuisance behaviour," she added.

Councils say the orders are used to tackle crime and anti-social behaviour but there are concerns that the powers are too broad and can be misused.

Writing on the issue for Politics.co.uk, civil liberties organisation Liberty said that PSPOs are "ripe for misuse and abuse, with the vulnerable and voiceless likely to suffer most".

Manick Govinda, an arts producer who attended the Hackney protest, said PSPOs are also a threat to freedom of expression.

"This is a serious matter for the arts sector," he said.

"Curbing buskers, pavement artists, public drinking, and swearing are just some of means that artists express themselves in public space, for a direct engagement with an audience."

The Manifesto Club says that it hears of new orders almost every day and is planning to send out Freedom of Information requests to local councils later in the year to see how far the use of PSPOs has increased over the last few months. More protests are planned for later in the year.