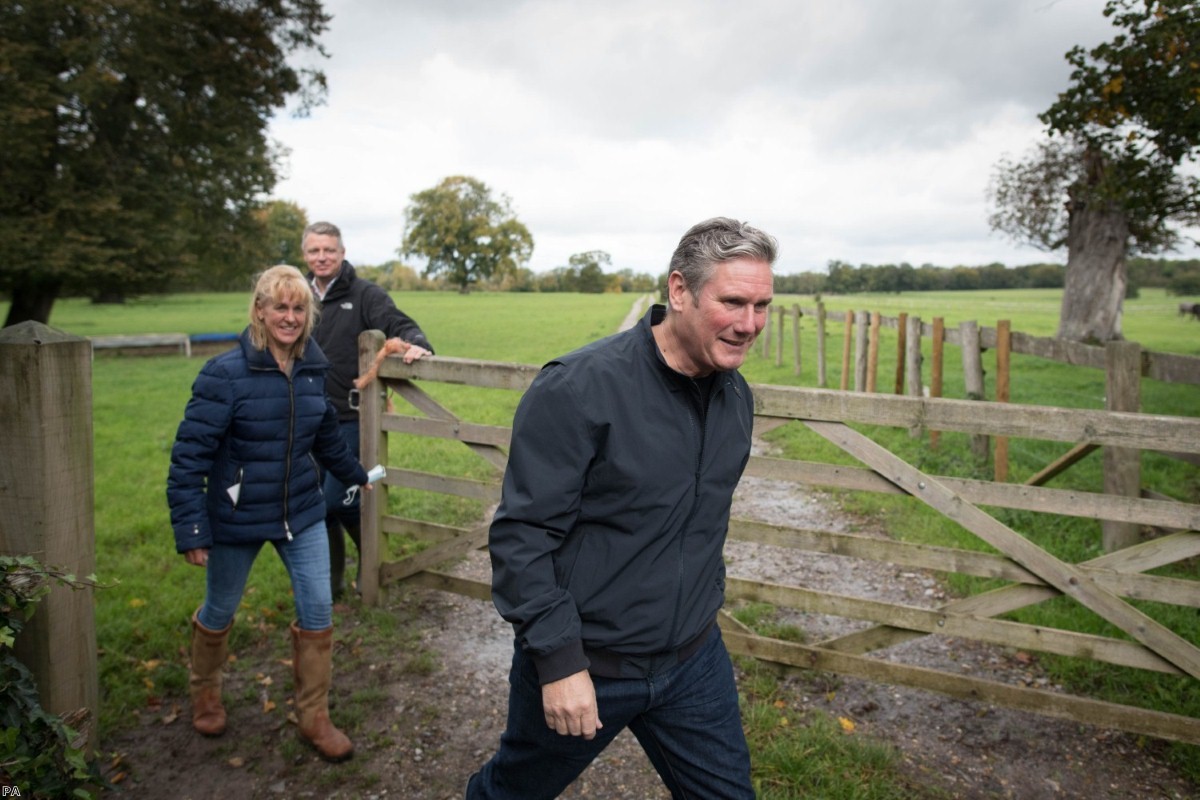 April must seem a long time ago in Conservative Central Office. Where once much of the country rallied round the flag, falling in line behind the government and its stricken prime minister, the Tories' yawning poll leads have since disappeared, with Labour occasionally even nudging ahead – an unthinkable notion back in the spring.

Through its slipshod handling of the coronavirus pandemic and the fiasco around Dominic Cummings, the Tories have squandered unity, goodwill and vote share in the polls. Labour's strategy of critical support for the government has paid solid dividends so far with voters. Keir Starmer has stronger personal ratings than any Labour leader since Gordon Brown's honeymoon.

But Starmer's critics on Labour's Corbynite left ask how he isn't further ahead of a government that has a poor record on covid and seems to stumble from one shambles to the next. There's a degree of bitterness to the criticism, but it does point to a more fundamental challenge for Labour: the risk of a Tory revival if the pandemic dissipates and the economy recovers by the next election – and especially if the Conservatives change their leader.

With both YouGov and Opinium, the Tories' vote share among its own voters from last December has plunged from more than 85% in January – sometimes topping 90% in late March and April – to just 70% now with Opinium, and the high 60s with YouGov. But during that time Labour's vote share among 2019 Conservative voters has only risen slightly, from pretty much nothing back in January to around five percent now. The biggest rise has come from 2019 Tory voters responding 'don't know' to the question of who they'd vote for in a general election now. This has more or less doubled from below one in ten in January to almost one in five now.

It's normal for voters to be unsure how they'd vote between elections, but interestingly the pattern is not repeated among Labour voters from last year. The 'don't knows' among Labour voters with Opinium has fallen from the mid-teens during winter and spring, to around ten percent now. With YouGov it's generally in the low teens. In both poll series, Labour now has more support among its existing voters than the Tories have among theirs – a direct reversal from early this year.

These shifts were most marked around the Dominic Cummings row, but they have continued since then. Tory support in particular has continued to ebb away over the summer and into autumn.

The Tories' vanishing poll lead is therefore mostly down to Labour voters – and Lib Dems, around a third of whom are now backing Labour – affirming their support for Starmer's party, while Tory voters express increasing doubts over who would get their vote. This is solid stuff which will be reassuring to Labour HQ, but it's a long way from sending the Conservatives into panic mode.

There's a niggling concern though. Does this mean that Labour is piling on support where, in purely electoral terms, it doesn't really need it?

The party has made limited headway among Leave voters in YouGov's polling – again, the shift is primarily from Conservative to Don't Know. With Opinium, Labour has made slightly more progress. But in both cases, Labour's advance is split pretty evenly between Leave and Remain voters. That's not necessarily a bad thing – after all, some Remain voters in red wall seats defected to the Tories last year, having accepted the referendum result and wanting to 'get Brexit done'.

Labour's support in the seats it held onto last December hasn't really shifted that much since May – all that is happening is some Tory support is shifting to Don't Know.

But in the seats it has lost since 2005, Labour's support has risen from the low to the high 30s, while the Tories' has fallen from around 40% into the 30s, and indeed to just 30% in the two Opinium polls this month. In May and June the Tories were comfortably outpolling Labour in these seats – now the picture is increasingly fuzzy, with Labour ahead in the last two polls and the Tories only ahead in two of the six polls conducted since the start of August.

These categories are subject to relatively high margins of error and can fluctuate significantly from one poll to the next, but the pattern over time smooths out. Labour is making ground where it needs to. Or, alternatively, the Tories are losing ground where they can't afford to.

There are other smoke signals in the data. The Tories' lead among town-based voters has disappeared since May, while their lead in rural seats has halved, according to Opinium. The Tory lead in the Midlands has essentially vanished with both pollsters, while in the North, Labour has retaken the lead and is now comfortably ahead.

YouGov's series of separate Wales-only polls shows the party is now eight points clear of the Tories, compared to five points in the general election – and a 12-point Tory lead back in April.

Does this mean that Labour is reclaiming its working class base? This is harder to measure. The rather unsatisfactory ABC1C2DE measure, which is based on old employment categories, shows Labour reversing a healthy Tory lead among the white collar ABC1s, while the Tories maintain a shrinking lead among blue collar C2DEs.

The latter includes state pensioners. It's the over-65s who continue to provide the Tories with commanding leads – albeit less commanding than in Spring. Labour has made little headway among pensioners – although, once again, Don't Knows have increased. Its performance among those approaching retirement varies between the two pollsters, with Labour doing far better with Opinium.

The same pollster has Labour taking the lead among 35-to-44-year-olds and 45-to-54-year-olds, reversing Tory leads from Spring. This matters. The 'crossover' age at which people became more likely to vote Tory was 39 at the last election, down from 47 in 2017. For all the talk about the grey vote, it is these more middle-aged bands that are the critical battleground. Labour is a long way from being comfortable here, but it's a marker of significant progress.

For all that, it's worth remembering Labour's healthy poll leads under Ed Miliband, and prior to the 1987 election under Neil Kinnock. On both occasions, the following election was a disaster for the party. Analysts often regard leadership ratings as a better guide to future elections than voting intention polls.

We know that Starmer has taken the lead in 'best prime minister' polling since becoming Labour leader in April – something that largely eluded Miliband.

Given that around a third of 2019 Tory voters aren't currently backing the party in YouGov's polling, this suggests that Starmer's ratings are higher among those 2019 Tory voters who aren't currently backing the party, Johnson's ratings are lower, and 'Don't Know' is a much more common response. Correlation is not causation, but it's evidence that Johnson's unconvincing leadership may be turning Tory voters away.

Other than that, Starmer's own ratings largely mirror the patterns seen with Labour's ratings in the voting intention polls – he's popular with Labour and Lib Dem voters from last year, popular with Remainers, younger voters, ABC1s and Londoners. Perhaps unlike Labour, his own ratings shot up early on and have since plateaued, whereas the party has made slower but steadier progress throughout the year.

So where does this all leave us? We're very far from a general election, a lot might change, and there are substantial margins for error in the data. But certain trends are positive, if not exactly triumphant, for Labour. They are not just piling up support in their remaining heartlands. They are winning over middle-aged voters and those in their former seats. They are making up ground in towns and rural seats.

And meanwhile, a significant minority of Tory voters have grown unsure about the government without being won over by the opposition. That means Labour has room to grow – but it also means the Tories do too. A lot will hinge on which of them succeeds in doing so.