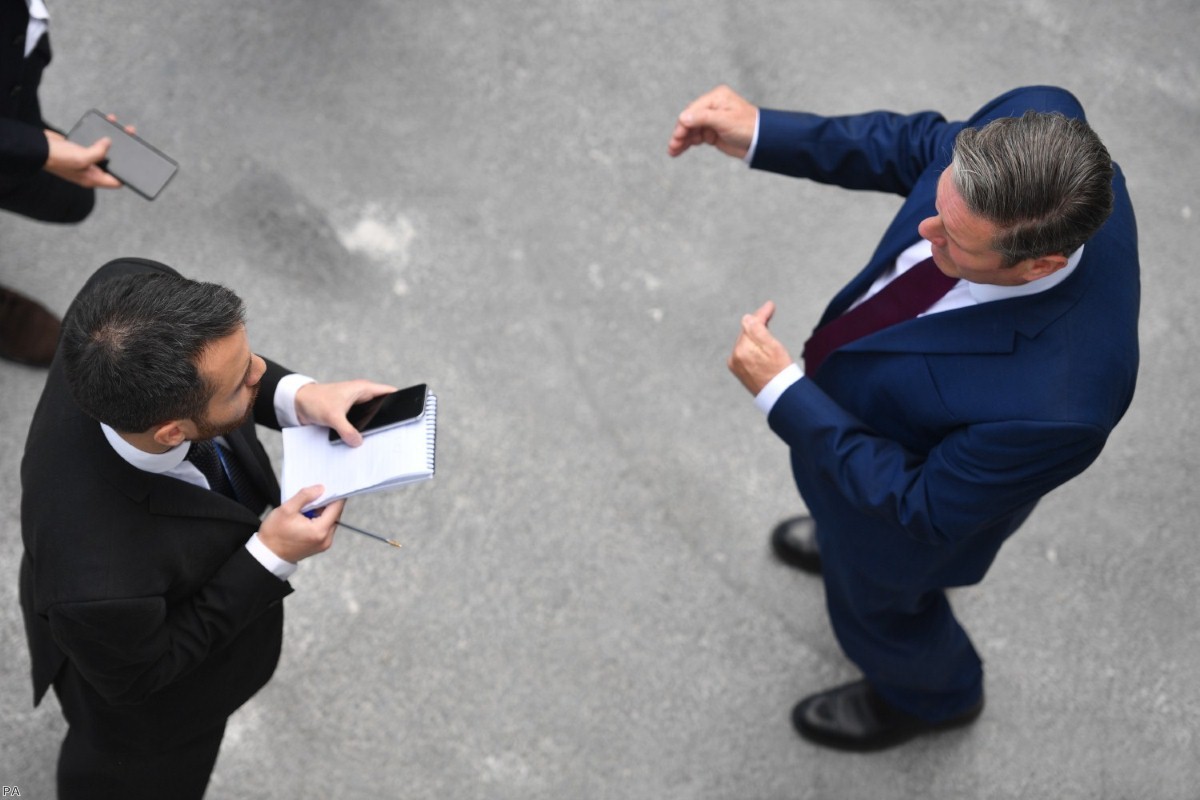 Competent Leave? Starmer is side-stepping the Tory trap on Brexit

It's a telling turn of phrase. Labour leader Keir Starmer is urging prime minister Boris Johnson to "get on" with delivering a Brexit deal so the UK can focus on getting through the coronavirus pandemic. As Starmer put it in an interview with Sky News yesterday: "He promised the British people he'd get a good deal, he needs to deliver on that promise."

Starmer is seeking to cast his party as competent Leavers in opposition to a prime minister he will portray as a reckless one. "Reopening old arguments," as Starmer puts it, would simply take the heat off the government for its woeful response to the covid pandemic.

The Labour leader's stance on Brexit will thwart attempts to cast him as an out of touch Remoaner who hates democracy and wishes to block Brexit. Moreover, reigniting the arguments of 2016-2019 over Brexit would risk playing into the right's attempt to wage a culture war against the left. Conservative pundits are desperately seeking to import the politics of the United States to the UK – with not a little help from the ultra-woke. Successive Conservative governments have created an economy that doesn't work for the majority of working people and are increasingly adopting a 'look over there' platform in their rhetoric: migrants, progressive academics and high court judges are all in the firing line.

The US Republican party has long pursued a similar strategy, seeking to cast its opponents as effete, latte-sipping elites who do not understand the lives of ordinary people. Ever since the Reagan era, Republicans have relentlessly promoted a culture of fear around 'welfare queens', 'superpredators', and other phantasms – while simultaneously cutting taxes for the super-rich. It's a clever trick: you build an economic order that creates voluminous victims and then run on a ticket against those victims.

As Britain braces for record levels of unemployment and its consequent hardships, we can expect the Tory party – encouraged by its bellicose right flank – to adopt a similar tack. Indeed, we have already had a taster of what's to come with home secretary Priti Patel's ludicrously over the top rhetoric directed at a relative handful of refugees beaching on the Kent coast.

To be sure, Starmer must draw a line between himself and the ultra-woke who seem to dominate Labour's online Left. So far he has performed this task relatively well, refusing to be drawn into unambiguously supporting self-identification or embracing the open borders fundamentalism that sought to paint Ed Miliband as a demagogue merely for proposing "controls on immigration".

Mainstream Labour's error in the lead up to the Jeremy Corbyn years was a belief characterised by the phrase 'no enemies on the left'. This resulted in the grotesque spectacle under Corbyn of apologists for the Soviet Union working in the office of the Labour leader. In side-lining Corbyn-era politicians such as Rebecca Long-Baily and Lloyd Russell-Moyle, Keir Starmer appears to understand the importance of a firewall between himself and the hard Left.

But this is different from being drawn into a culture war that is being deployed as part of a distraction effort by the government off the back of its catastrophic mismanagement of covid. The Tories also hope to deliver something to the so-called 'red wall' seats they took from Labour at the 2019 election. Four decades of economic policy have failed many of these people. They have a list of grievances and are looking for someone to blame and, perhaps, someone to follow. They tend to be economically to the left, favouring state intervention if necessary, but culturally to the right, reluctant to embrace immigration and deeply suspicious of the European Union.

Britain is a relatively socially mobile nation and many younger members of these communities migrate to London or other big cities, either to attend university or to find a job upon graduation. Some of those left behind – marooned in dilapidated towns with few remaining economic opportunities – have grown increasingly resentful at a world they feel has little place for them. They feel looked down on by what David Goodhart, in his new book, Head, Hand, Heart, calls the 'cognitive elite': city-dwelling graduates who value individualism and mobility over family and community.

But the culture war is largely a distraction from the problems that have befallen Britain beyond its cities. These problems centre around the proliferation of low-paid, precarious jobs and a lack of opportunity for non-graduates. A 2015 report by the Centre for Cities described a situation in Britain's towns where jobs in declining industries were being replaced by "lower-skilled, more routinised jobs, swapping cotton mills for call centres and dock yards for distribution sheds".

Railing against asylum seekers, the European Union or the woke Left is not going to redress Britain's regional imbalances. However, it is a useful distraction for a Conservative government that has no idea how to counter the economic orthodoxy of the past 40 years – and which is visibly flailing in response to a deadly pandemic. As much the Labour leader's Brexit stance will upset diehard Remainers it is the politically pragmatic one: Starmer has astutely sidestepped a trap set for him by an increasingly desperate Conservative party.

James Bloodworth is a journalist and author of Hired: Six Months Undercover in Low-Wage Britain, which was longlisted for the Orwell Prize 2019. You can follow him on Twitter here.