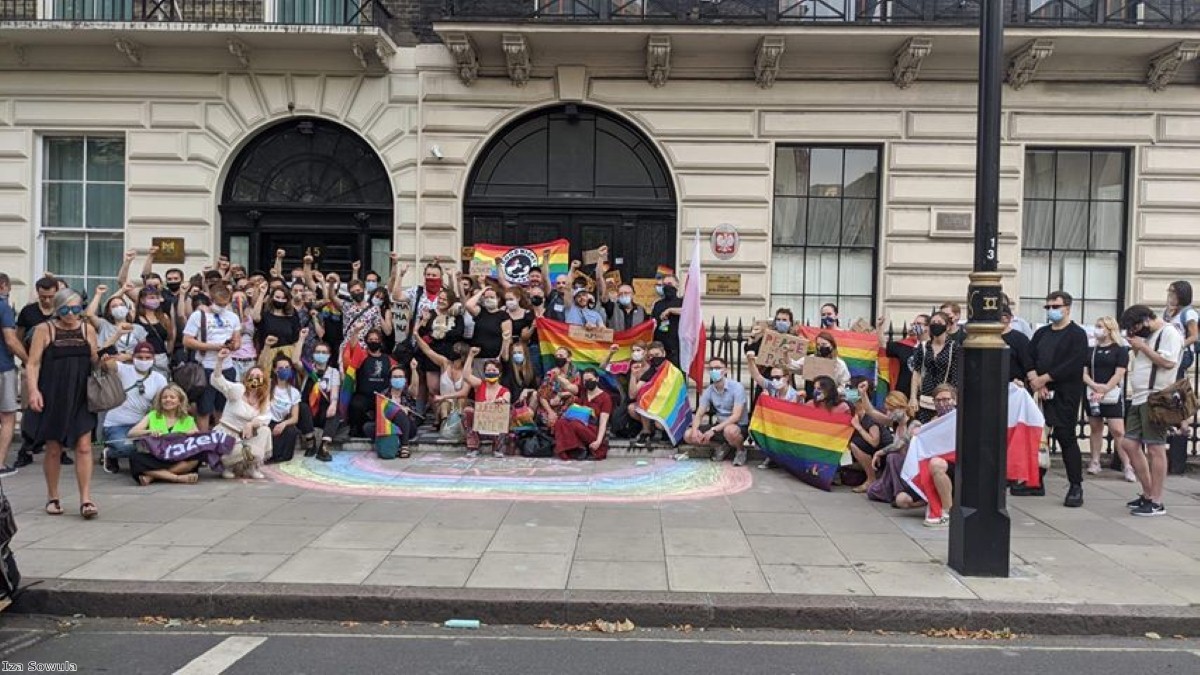 Curling up towards Regent's Park, the wide thoroughfare of Portland Place in Marylebone – a street hemmed in by stylish terraced houses, bedecked in various flags – is an international corner of central London. Among many other embassies and institutions, number 47, towards the northern end of the street, is the Polish Embassy, four-storeys of fashionable black and white brick. Attached to the front are Polish and EU flags, which project out into the street.

On Saturday, beneath those flags, you could also see a rainbow, drawn in chalk, spilling out from the building's elegant chequered entrance onto the pavement. It was there that around a hundred people gathered to protest against the recent detention of an LGBTQ rights activist, amid an escalation of homophobia in Poland.

The activist, Margot Szutowicz, was taken into custody in Poland for two months, accused of hanging rainbow flags on monuments in Warsaw and damaging an anti-abortion campaigner's van.

"We want to show all the people who are brave enough in Poland to go out and protest and risk being arrested that we are with them," says Robert Kocur, who was one of the organisers of Saturday’s protest – along with Polish Rainbow in the UK, the first Polish LGBTQ group in the country. They were joined by Marek Ciechanowski, who organised a separate protest at the embassy. The demonstrations were held at the same time as several other protests across the UK, from Manchester to Newcastle, as Poles in the UK spoke out against increasing homophobia in Poland.

Poland is now a dangerous place for the LGBTQ community. Over the last two years, ruling party Law and Justice (PiS) have clamped down on what they call an "LGBT ideology", claiming it opposes Polish values and tradition. Incumbent President Andrzej Duda, a PiS ally, made anti-LGBTQ rhetoric a centrepiece of his election bid in the recent presidential race, suggesting it was worse than communism and unveiling homophobic election pledges.

Homophobia is on the streets too, with pride marches attacked and rainbow sculptures vandalised. In the last year, as many as 97 municipalities across an area spanning a third of Poland have declared themselves "free from LGBT ideology" or adopted family rights charters – prompting several European towns to sever their twin town arrangements with these municipalities, citing human rights violations.

In May, Poland was ranked by ILGA Europe as the worst country in the EU for LGBTQ rights, with attacks from the government and church particularly blamed for increasing discrimination.

Earlier this month, the situation took an even more worrying turn. Three activists were detained, accused of offending religious feeling and insulting monuments, after rainbow flags appeared on statues in Warsaw – including, most controversially, a statue of Christ. Days later, Margot, from the organisation Stop Bzdurom, was given a two-month temporary arrest sentence, charged with vandalising a van belonging to an anti-abortion campaigner back in June. She now faces up to five years in prison.

Thousands have since protested against her arrest, both in Poland and across the world. On Friday August 7th, demonstrators in Warsaw surrounded a police van taking Margot to a station. In the ensuing scuffle, 48 others were also arrested. The incident has been dubbed the 'Polish Stonewall'.

The UK-based protests may only be in the hundreds for now, but organisers believe they reflect a powerful show of support for those in Poland.

One organiser is the London-based Robert Kocur, a 29 year old who works at METRO Charity, coordinating workshops about sexual health in the Polish language. He is a founder of SLAV 4 U, the first ever Polish Drag Show in the UK, which showcases Polish pop culture with a queer twist.

"After the alarming situation in Poland regarding the LGBT+ community, me and my friends decided that we can't stay still and need to show our support in a form of protest," he says. "The first one we've organised was very symbolic and gathered around 15 people. It was our protest against the homophobic words that our president said in public: 'LGBT are not people, it's an ideology'. Those dehumanising words reminded us of how, back in the day, people were dehumanising Jews… and we know what happened later."

Kocur says that since he moved to the UK over six years ago, he's seen the situation for the LGBTQ community in Poland deteriorate. But, as reports of hostility in Poland have increased, so has the number of protestors at the embassy.

"Now it's also about our visibility," Kocur says. "We are sending a clear message to Polish politicians that our community is ready to fight for our rights."

Other UK-based LGBTQ organisations are also getting behind the campaign. "We are extremely alarmed by what's happening to LGBT people in Poland and we stand in solidarity with them as they face continuing violence and hate," Leanne MacMillan, director of Global Programmes at Stonewall, says. "The global LGBT community owe it to the brave activists on the ground in Poland to come together, show visible support for them and work towards a solution to this appalling situation."

On Saturday, a separately-organised protest at the embassy was held by Marek Ciechanowski, who is British-born with Polish parents. He said this was the first time he had organised a solidarity protest for the Polish LGBTQ community, and wanted to"show support" for LGBTQ friends in Poland.

"I think it's a very important time to let the world know about the worrying changes that are happening in Poland right now," he says. "When a president and leading government encourage homophobia by suggesting LGBTQ people are not human, it's time for everyone to take action and protect the lives of minority groups before it's too late and history repeats itself."

Madga Oldziejewska, from Polish Rainbow in the UK, also thinks the British public need to be more aware of growing discrimination. "I don’t think there is a lot of awareness in the general society about what is going on," she says. "It's not just happening in Poland. The wave of hate and the move towards the far-right is something we're seeing internationally."

Nevertheless, Oldziejewska says that around 100 people turned up on Saturday to what she calls an "amazing" protest, although there was also a small group of counter-demonstrators. "There were only a few of them but they managed to cause quite a scene – calling us names like fascists – which is ironic, to say the least."

Kocur says he thinks UK protests could have a real impact on the struggle  in Poland. "I truly believe that our protests in the UK have positive impact on the situation of the LGBT+ community in Poland," he says. "I would certainly feel empowered if I would be sitting in Polish arrest by knowing that the Polish diaspora is backing me up and sending a message of support. At the end of the day those people are the true fighters that are changing the Polish history. They need our help."

Oldziejewska agrees. She's hopeful Saturday's protests are part of a bigger growing movement. "The events of last week are so stark," she says. "They show how far we've gone."

Juliette Bretan is a freelance journalist covering Polish and Eastern European current affairs and culture. Her work has featured in CityMetric, The Independent, Euronews, Ozy and New Eastern Europe. You can follow her on Twitter here.