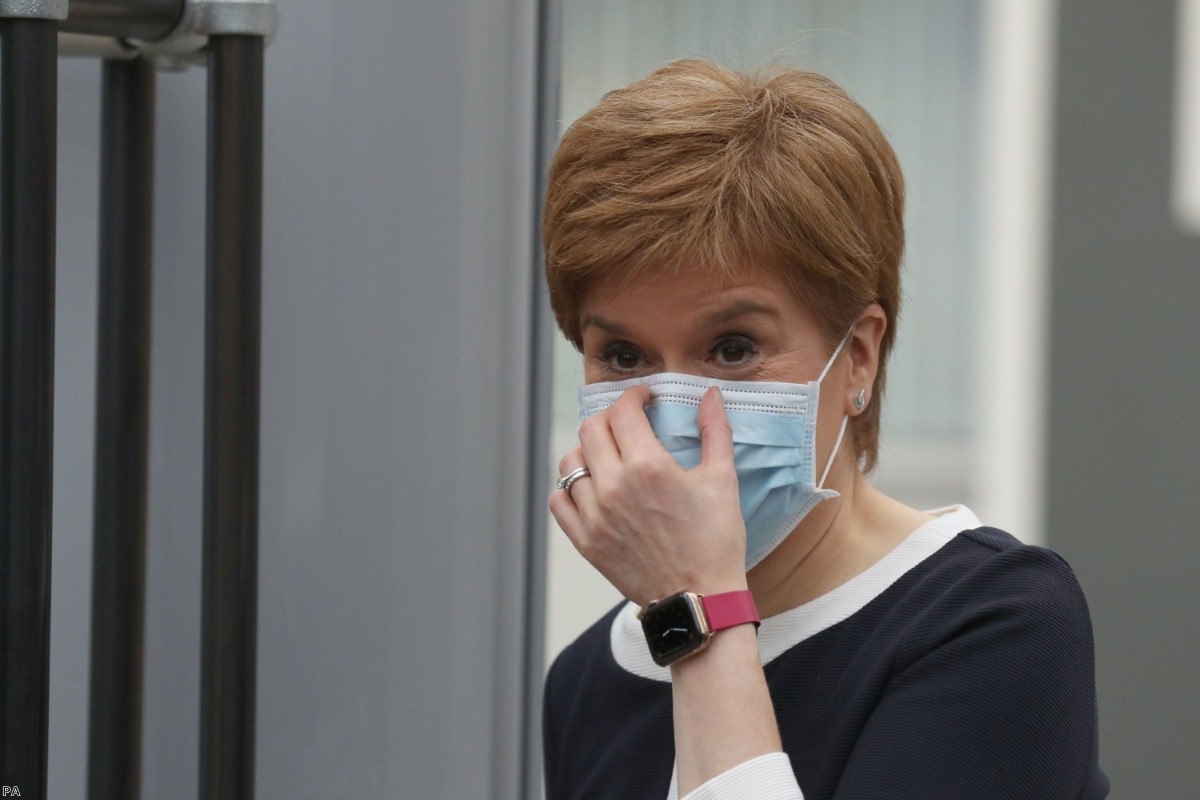 The road to independence: How Covid and Brexit pushed Scotland from the Union

At least they've noticed. Boris Johnson's flying visit to Scotland late last month wasn't much of a response to rising support for Scottish independence – but it was, at least, a response.

Johnson's desperation not to be the prime minister who 'lost the union' might be the only thing motivating him to try and hold it together, given that, like David Cameron, he instinctively sucks at the electoral teat of English nationalism, casually alienating Scottish voters with the insouciance of a man for whom everything in life has been cleaned up after him.

The recent turn in the polls towards independence is much more dangerous for unionists than the Yes campaign surge in 2014. During the referendum campaign, the surge in support for independence came from undecided voters rather than supporters of the union. But 2019 and 2020 have seen a much more direct shift of opinion from No to Yes.

The shift has had two big drivers – the first of which is Brexit.

"If you go back to the 2014 referendum, there was no relationship at that referendum between people's attitudes towards Europe and whether or not they voted Yes or No," says polling expert John Curtice.

The Brexit vote then sparked a movement of pro-union Remain voters towards Yes, but one that was balanced out by pro-independence Leave voters shifting towards No – initially at least.

"Last year it became clear that the group of people who were moving from No to Yes because they voted Remain was now larger than the group moving in the other direction," says Curtice. "So by the end of 2019 and by the time Boris Johnson gets his majority, it's very clear that the pursuit of Brexit is beginning to undermine support for the Union, such that we were getting close to, but were not quite at, the 50-50 mark."

And then came the coronavirus.

"When the pandemic started, I briefly thought 'well, this could be curtains [for independence], at least for a good few years'," says James Kelly of pro-independence website Scot Goes Pop! "The fact that it's gone completely the other way demonstrates how catastrophic Westminster's handling of the crisis has been."

Critics of the SNP argue the Scottish government has overstated the extent to which it has deviated from the decision-making at Westminster in handling the pandemic, and Scotland has endured many of the same problems as the rest of the UK, most notably with outbreaks in care homes.

"It is really interesting that at a point where two governments are following a similar path in policy terms to a crisis, they are getting very different responses from the public for what is essentially a very similar response," says Edinburgh-based political consultant Mark Diffley.

First minister Nicola Sturgeon has enjoyed sky-high popularity in Scotland during the pandemic – the complete reverse of Johnson's subterranean personal ratings. And this support is not limited to SNP voters.

"The really striking thing was that the cohort of 2014 No voters, which of course would include lots of Leave voters as well, rate the first minister's handling of the crisis more positively than the prime minister's handling," says Diffley.

"Which is quite something when you sit and think about it – a Conservative prime minister against an SNP first minister coming off worse amongst unionists."

While survey data has long shown Scottish voters have more trust in the devolved government than in Westminster, Sturgeon's style – and her visibility fronting most of the ongoing daily press conferences – contrasts with that of the prime minister.

"There's been a sense in which basically she's just levelled with people," says Curtice, "and she's kind of said, 'this is difficult, I'm probably going to worry about some of these decisions I've made for the rest of my life'. There is no promise of 'sunny uplands'."

Her focus on enabling people to reunite with loved ones when easing lockdown, in contrast to Johnson's focus on reopening the economy, also gives her leadership a more empathetic tone than the prime minister's, while steering away from the tub-thumping partisanship of the Tory leader.

"It's certainly possible to construct a case that would argue that perhaps Nicola Sturgeon has got the tone correct and given the impression that she knows what she's doing," says Curtice.

By contrast, Johnson is a "liability" for the unionist cause, says Kelly.

Scotland is now pursuing a 'zero Covid' strategy, with no deaths from one day to the next, whereas the Tories appear ready to tolerate an ongoing level of communal infection as they try and reopen the economy.

"The feeling is that things were going badly when Scotland was following Westminster's lead, and then improved markedly when Nicola Sturgeon went her own way," says Kelly. "It's not that what happened in care homes is directly Westminster's fault, but Scotland at that point had locked itself into a Westminster-led 'four nations' strategy that was hopelessly misconceived."

All this feeds through to the independence debate. Just as Brexit proved that Scotland's wishes could be overruled by the UK government, many Scots increasingly feel the pandemic shows they are better off governing themselves.

But with rising support for independence among Leave voters since the pandemic started, does that make an explicitly pro-EU Yes campaign risky in a second referendum?

"Insofar as Brexit becomes an essential part of the story, Yes support will fall further among Leave voters," says Curtice. "But it doesn't have to gain at the same rate amongst Remain voters in order to for it to match its losses."

Instead, the big challenge Brexit poses to the Yes campaign is the wearily familiar issue of the border. If Yes promises to pave the way for Scotland to rejoin the EU, we could see a repeat of the wrangling over the Northern Irish border after the 2016 Brexit vote – although that would also leave the UK government adopting the very same logic to argue against independence that it previously rejected in arguing for a hard Brexit.

The independence debate still has years left to run. But Kelly is confident that Brexit and the pandemic mean that voters will no longer see the Union as the safe option.

"My guess is the pandemic may have shifted opinion to the point where that's less likely to happen.  There's a feeling now that we're being run by a bunch of clowns in London, and that things won't get any better, and will probably keep getting worse, unless we do something about that."