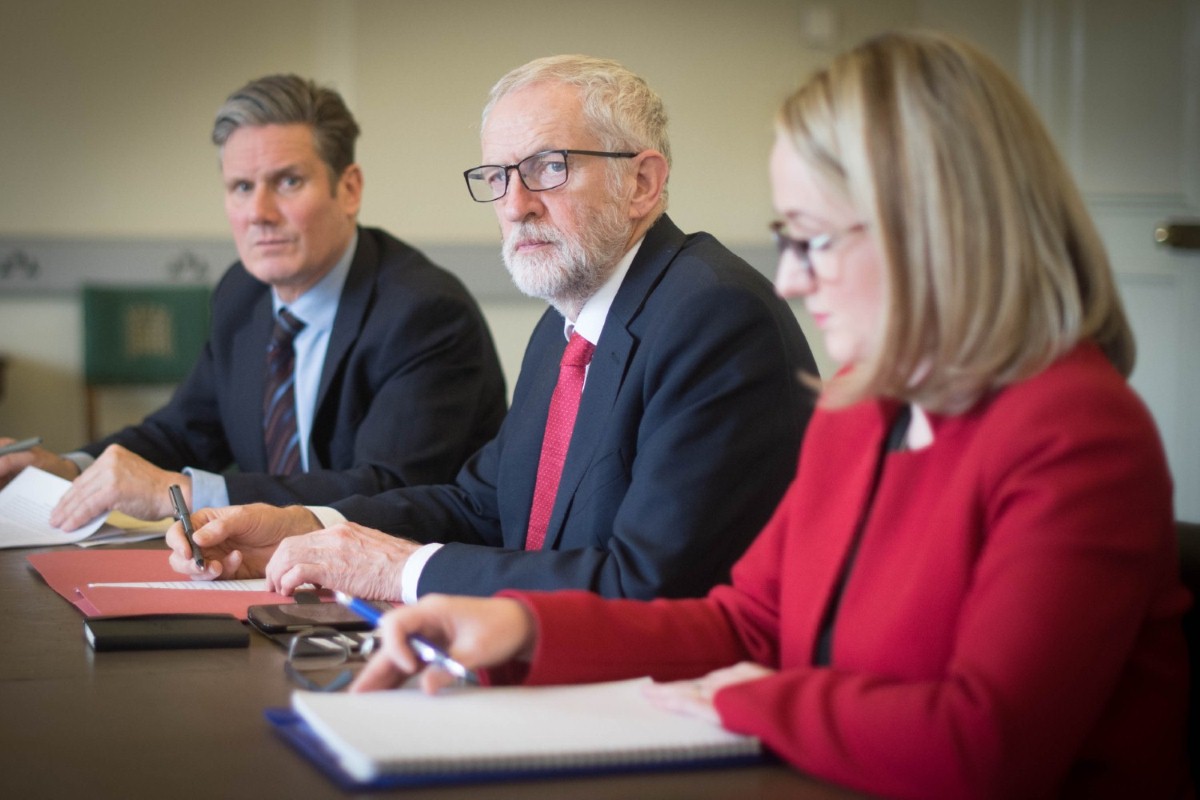 'The British Government should make clear to Israel now that any annexation of the occupied Palestine land would lead to sanctions.'

That unequivocal statement of support for Palestinians was published just yesterday, part of a statement by the Socialist Campaign Group of left-wing Labour MPs signed by 21 of their number.

The letter was unhesitant in its condemnation of Israel's plans and its support of Palestinian statehood. It demanded meaningful action against Israel in the form of sanctions.

And yet it neither sparked nor fed a row over anti-semitism. None of the signatories – including Diane Abbott, Jeremy Corbyn and Richard Burgon – face any disciplinary measures for endorsing it.

It is worth bearing that in mind as Corbynites decry the sacking of Rebecca Long-Bailey from the shadow cabinet.

The now departed shadow education secretary – Starmer's main rival in the recent leadership contest – approvingly shared a newspaper interview in which socialist actor Maxine Peake tied the murder of black American George Floyd to Israeli training of US police – despite there being no evidence that the latter led to the former.

According to Starmer's critics, this will hinder Labour MPs from speaking out against Israel's oppression of Palestinians. And yet 21 Labour MPs quite rightly face no backlash – certainly not from within Labour – for signing a statement calling for sanctions against Israel.

The difference, of course, is that the letter dredged up no conspiracy theories, unleashed no vitriol about Zionist lobbies, and simply stuck to the reality of Israel's Trump-backed plan to illegally annex swathes of the occupied West Bank, permanently seizing Palestinian land. If some of the signatories have a problematic history with anti-semitism, that does not make their statement yesterday problematic. It wasn't and no problem has arisen.

The Long-Bailey row shows just how easily some British Palestine campaigners link all the world's evils back to Israel. In her interview, Peake goes from Floyd's killing to Israeli training of US police in a heartbeat – apparently the nearest available evidence of the global nature of systemic racism. Somehow, Israel is always the nearest available evidence, 'Zionists' the ultimate diagnosis for every political ill.

The row also shows how keen Starmer is to get on top of Labour's anti-semitism problem – to demonstrate a clean break from the recent past, putting an end to the drip-drip of racism rows that riddled the Corbyn era and displaying a decisiveness that contrasts with both his predecessor and his opposite number.

And it reveals the sheer willingness, almost determination even, among many Corbynites to see betrayal at every turn of the Starmer leadership. Because he is not 'one of us', he must be out to destroy us, goes the thinking. He is not a Corbynite, so he must be a Blairite. They see Starmer's every action and inaction through the frame of 'betrayal'.

Anyone would think they actively want to be betrayed, that they long for its sweet taste of vindication, the chance to lecture all those who backed Starmer for their 'liberal' naivety.

The trouble is the Corbynites appear to have forgotten the electorate exists – not even just the national electorate, but the Labour one. There is no analysis of why Labour lost so heavily six months ago beyond blaming Remainer MPs – who were largely responding to the radicalisation of Remain voters – and the media. 2017 is written up as the great near-miss, ignoring the fact that even with the impressive Corbyn surge, Labour still finished 55 seats behind the Tories.

There is no interest in Starmer's personal ratings among the public rising massively above Corbyn's – even at Corbyn's 2017 peak.

And there is not even a nod to Starmer's utterly comprehensive victory among Labour members just two months ago. Long-Bailey trailed with barely a quarter of the vote. Richard Burgon, the Corbynite's Corbynite, traipsed in third in the deputy leadership vote.

Perhaps Corbynites have also forgotten how unenthusiastic their own support of Long-Bailey actually was. In the early stages of the contest, Ian Lavery was floating himself as a possible rival candidate from the left. Long-Bailey lacks the stature or reputation on the radical left of a Tony Benn – or, indeed, of Corbyn in 2015.

And Starmer's platform was not as a Corbynite – but not as a Blairite either. He is a centre-left politician who ran as a centre-left candidate, promising to detoxify the party, unify it and maintain most – but not all – of its existing policy agenda. What we are seeing now is the clash between unifying the party and detoxifying it – but there is little sign Starmer will seek to expel Momentum or tear out swathes of the 2017 manifesto.

It is Starmer's strong approval among members, MPs and the public that makes him secure. What is the Corbynite left going to do, exactly? They can't force him out. There's no public appetite for a radical left-wing breakaway party, and none among the major trade unions either. There's highly unlikely to be a surge of voter support for Long-Bailey, whose public reputation and name-recognition is limited. If they resign en masse from the shadow frontbench, they'd be surrendering what influence they have with the leadership. If they quit the party, they'll surrender their influence in the party.

No wonder the Socialist Campaign Group's response to the sacking was to tweet out a petition of support for Long-Bailey, with no shadow ministers' names attached  to it.

The Labour Left is in danger of becoming the wing that cried wolf. Instead of shouting 'betrayal' every five minutes, they'd be better off keeping their powder dry for the real thing – policy pledges and parliamentary votes. There will be existing Labour policies that Corbynites are keen on but Starmer simply isn't. If they want to keep mass nationalisation in the next Labour manifesto, they'll need allies outside their ranks, both among MPs and union leaders. It's not yet clear how secure the pledge to abolish university fees is – this, after all, was in Long-Bailey's now-vacated brief.

And while it's unlikely Starmer will lead Labour into abstaining on the rolling back of trans rights, there would be an almighty firestorm if he does.

In the last 24 hours Labour's Corbynite wing has shown it has learned nothing from its recent downfall, and has lost the strategic nous it briefly developed during the early Corbyn years. Starmer has shown he wants Labour to win power. If that's what Corbynites want as well, they have a funny way of showing it.