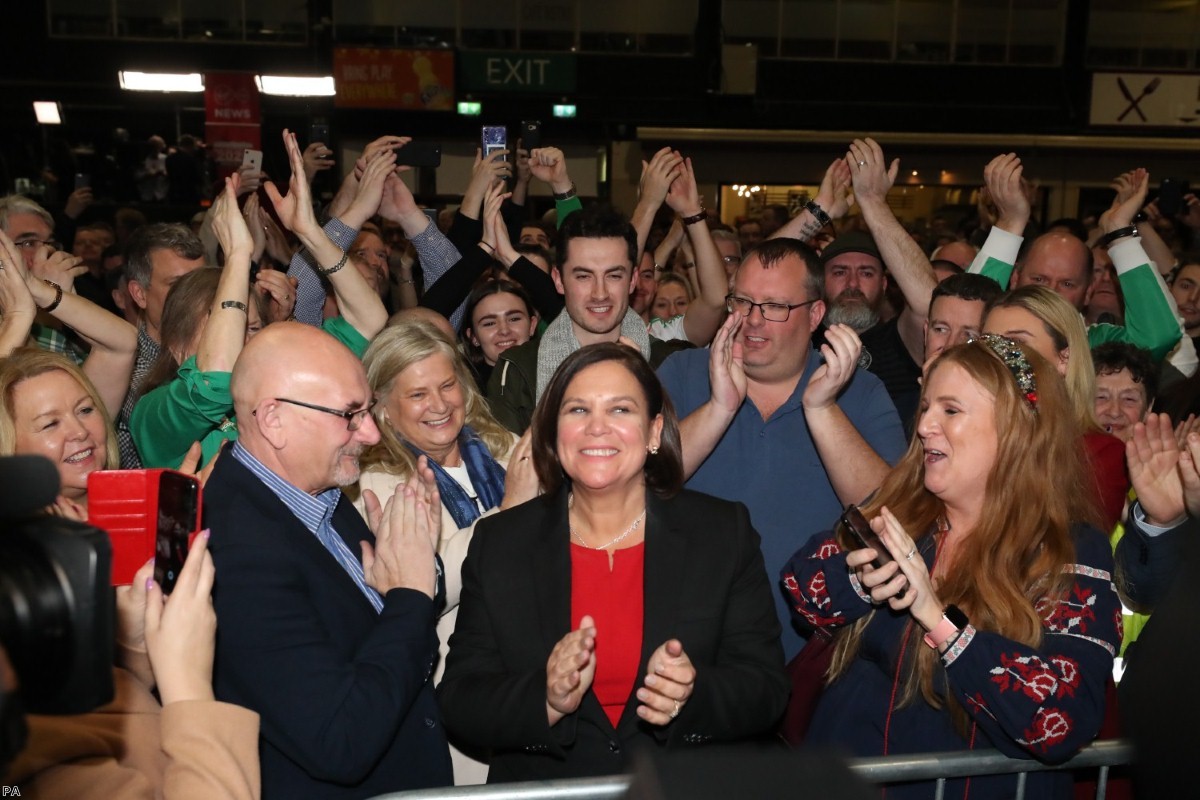 "There are decades where nothing happens," remarked Vladimir Lenin, "and there are weeks where decades happen." You don't get much chance to quote Lenin approvingly these days, yet Mary-Lou McDonald managed it when she responded to Sinn Fein's remarkable breakthrough in the Irish general election.

It was pretty apt. In her first election as Gerry Adams' successor as Sinn Fein president, McDonald has shattered the cosy cartel running Irish politics – dominated, as it has been for nearly a century, by two decrepit but maddeningly resilient parties of the centre-right – Fine Gael and Fianna Fail.

With 24.5% of the vote in the Irish Republic's election – on a 10.7% swing – Sinn Fein has truly moved centre-stage. It beat Fianna Fail on 22.2% and Fine Gael on 20.9%. Still, this only netted 38 seats in the 160-seat Dáil. The surge in public support caught their own strategists off-guard, with the party only standing 40 candidates to maximise their vote in the complex multi-member system used in Irish elections.

Nevertheless, having won the popular vote and tied with Fianna Fail in terms of seats, Sinn Fein is in the ascendant. This week will see talks intensify about forming a new Irish government between Leo Varadkar's Fine Gael, in power since 2011 and latterly reliant on a confidence and supply arrangement with the other behemoth of Irish political, Fianna Fail, led by former Irish foreign minister, Micheál Martin.

Both parties are trying to freeze-out Sinn Fein as they discuss forming a "grand coalition". Trouble is, they are doing so with all the energy and enthusiasm of mating pandas – and quite possibly with the same outcome. There's a palpable sense that something has changed and for the old parties to try and cook up a deal, when they have been so roundly rejected by voters, feels contrary to the moment.

Indeed, there are voices within Fianna Fail that want to break free from their support of Varadkar and see a tie-up with Sinn Fein as a good fit. If not, then a new poll suggests that if there needs to be a second election, SF would win 35% of the vote and batter both parties.

Three things happened in this Irish election. The first and most obvious is that Sinn Fein went mainstream – and in a big way. So long on the margins of southern Irish politics, the Shinners have assiduously positioned themselves as the centre-left alternative to an old pals network where two centre-right parties, albeit presiding over a booming economy – have done little to spread the benefits fairly.

Housing, healthcare and homelessness dominated the election. As a result, Sinn Fein's opposition to any increase in the state retirement age and emphasis on the spiralling costs of rents and childcare struck a chord, particularly with frazzled younger voters.

In the south, the party of Irish unity is also the party of reducing economic inequality. The Irish Labour Party – like the British Lib Dems – is still blamed for the crushing austerity measures they drove through as junior coalition partners to Fine Gael a decade ago and is now effectively moribund.

The second is that Sinn Fein has a popular and resonant leader. As the new face leading Ireland's oldest party, McDonald is a class act. The 48 year-old Dubliner is poised, fluent and likeable, with a classless appeal. A poll over the weekend showed her satisfaction rating is now 22 points ahead of Martin, her nearest rival. It has increased 13% since the election. Sinn Fein's campaigning – particularly on social media – is streets ahead of the other parties.

The third is that Varadkar's diplomatic 'victory' over the UK in the Brexit negotiations didn't translate through into sustainable domestic popularity for either him or Fine Gael. There is something tin-eared about Varadkar. The warning signs in terms of domestic disquiet about widening inequality were ignored for too long. Tip O'Neill’s aphorism that "all politics is local" serves as a perennial reminder that the electorate is always primarily concerned with standard of living issues.

Something structural is changing, though, to Sinn Fein’s longer-term advantage. There was a co-ordinated attempt between their opponents and the panjandrums of the Irish media class to rake-up a brutal murder from 2007 – carried out, it is alleged, by former IRA members – it barely affected their popularity. The cordon sanitaire that Dublin's media and political classes have erected around Sinn Fein no longer has any effect. For many southern voters, the past is becoming the past. Although Ireland's age profile is actually rising, a third of the population remains under 25. Memories of the Troubles are mainly vicarious for anyone under 40.

But this election was also about something prosaic. It's another incremental step both in normalising Sinn Fein and forcing a bigger realignment in Irish politics. For McDonald, it was part of a strategy about locking-in three-party politics and then, over time, forcing Fianna Fail and Fine Gael to cannibalise each other's support, allowing a more familiar right-left model to emerge.

What does it all mean for Northern Ireland? The southern political establishment, so long reluctant to engage meaningfully with the prospect of Irish unity, will now find the subject impossible to ignore. Either Sinn Fein ends up as a coalition partner in government and actively promotes it, or it influences the political weather as the main opposition party.

The ancien regime wouldn't be the ancien regime unless it tried to cling onto power. But if a deal between Fianna Fail and Fine Gael falters and opens the door to Sinn Fein entering government instead, then it will see British ministers dealing with Mary-Lou McDonald either as foreign minister and Tánaiste (deputy PM) or even, perhaps, as Taoiseach.

If Boris Johnson thought his dealings with Varadkar were difficult, he's not seen anything yet.

Kevin Meagher is the author of A United Ireland: Why unification is inevitable and how it will come about.