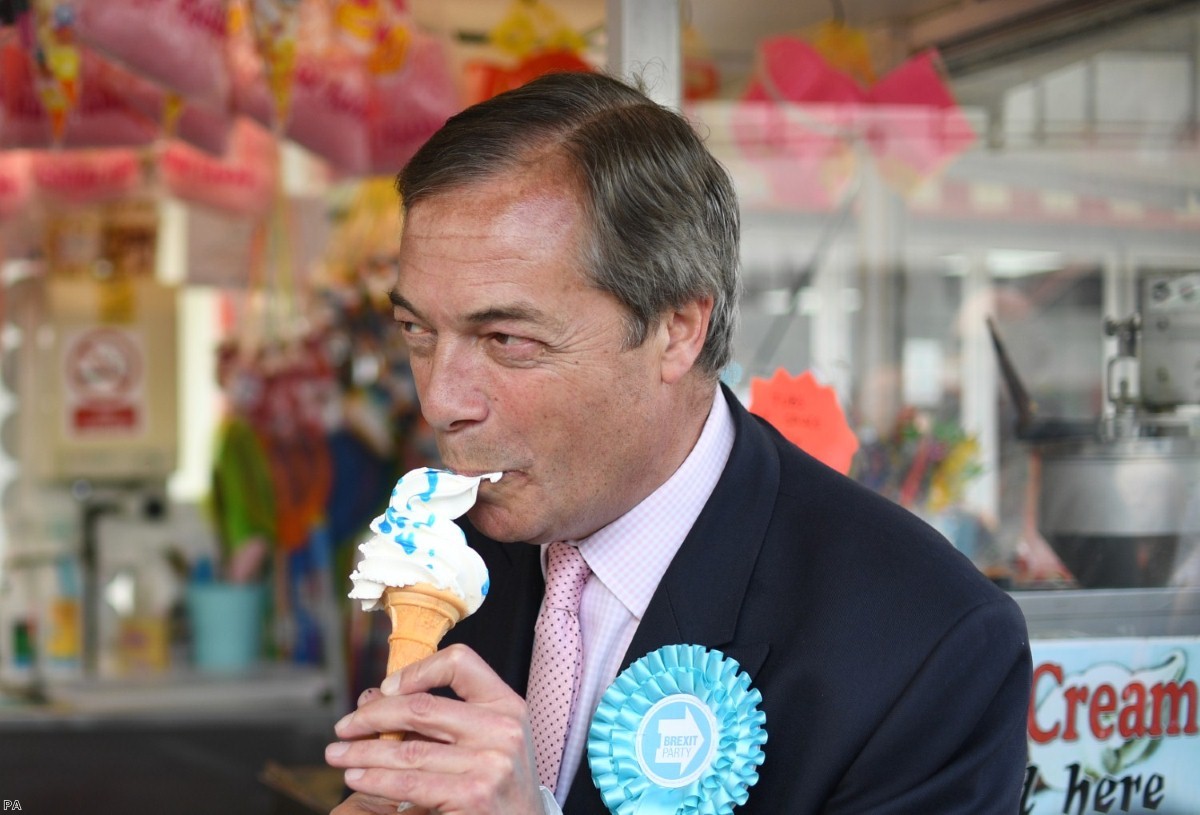 Up close and personal with the Brexit party pyramid scheme

The Brexit party claims to want to change politics. It has turned the tables on the referendum result, convincing Leavers that they lost and spreading a message of bitter betrayal on the part of the Brexit-backing government. In doing so it risks repeating the worst of the original vote, battling blindly for an outcome it cannot define and whose consequences it chooses to ignore.

At three different Brexit party rallies I've attended, a sense of genuine frustration and misplaced anger has pervaded conversations. Frustration at the delay to whichever version of Brexit they voted for. Anger at the establishment, Remainers, immigrants, civil servants – anyone they perceive as blocking the process.

The Brexit party has attempted to seize upon this sense of dispossession by pushing for a decisive departure from the EU. But for a movement with only one aim, there's a remarkable lack of consensus about how to achieve it.

Among attendees of the rallies, there is support variously for Norway, Canada and Switzerland style deals, a range of WTO arrangements, leaving and staying in the single market, and no deals whatsoever. More than anything, people just want 'out' of the EU, without the complication of having to think about how that might come about.

The Brexit party is a political pyramid scheme. It functions on the continued belief of its members that popular support will somehow compensate for a total lack of underlying purpose. It is collective responsibility for an impending disaster, but as long as we're all in it together, it doesn't really matter what 'it' is.

In a garden centre car park in Devon, a crowd turned up to see a commodities trader turned MEP, a former Conservative shadow home secretary and a double-barrelled ex-rear admiral rail against the establishment.

Farage's controversies have helped keep him out of the perceived political establishment, but in proposing a party without a manifesto, he is setting himself up as judge, jury and executioner of Britain's fate. A vote for the Brexit party could therefore mean a vote for political elitism at its most extreme.

Promises to change politics abound, but none of the rallies sound like the birth of a bold new movement. They sound like an excuse to profit from 2016's mistakes and an unwillingness to expand on the one policy the party admits to having. And this echo of the original referendum's imprecision will likely only exacerbate the disappointment of those who first put their trust in politicians to enact the vaguest of questions.

In Coventry, that no doubt includes a smartly dressed supporter insisting that the government's plan does not actually constitute leaving the EU. And at a rally in Lincoln, many tell us that they'd rather Remain than go through with the one negotiated form of Brexit actually on the table.

"How can we be in a situation where we're ruletakers and we've not got a seat at the table?" a man asks. "I just can't think of anything worse than Theresa May's deal."

Behind the anger, though, there is little substance. Nearly everyone has a different vision for Brexit and is furious that it's not being implemented. Faced with the suggestion politicians should just get on with Brexit, Farage's supporters readily agree. But when it comes to defining a specific vision of that departure, there is little consensus. All the options are greyed out.

Farage has readily admitted that no manifesto will be produced, and it is here that the Brexit party is at its weakest. Every claim that Brexit should precede any other policies must be met with the response: which Brexit?

The devil is in the detail, and it is telling that none of the rallies we attend attempt to engage with the crowd's underlying concerns – inequality, immigration, employment, healthcare. The platitudes on offer are simply incapable of doing so. The secret to pro-Remain success in the upcoming elections surely lies in exposing this internal division, offering instead its own hopeful vision of the country, and incentivising young voters to turn out.

It's not just that the Brexit party rallies are lacking in twenty somethings – there is scarcely a supporter who wouldn't have known decimalisation. The biggest threat to their electoral success comes from young people simply speaking up on May 23rd.

By all accounts, then, the Brexit party is not the unimpeachable force to whose victory some already seem resigned. The rallies are overhyped, often absurd, self-congratulating wastes of £2.50. The candidates are tedious puppets, led by wily opportunists with a penchant for populism. Xenophobia and resentment abound. There's no evidence of radical change in direction, no shift towards a younger generation, and no indication that today's crowd are in any way removed from the core Leave demographic.

It would be a mistake to underestimate the party's potential. But it would be an even greater error to gift the elections to such a deeply flawed campaign.