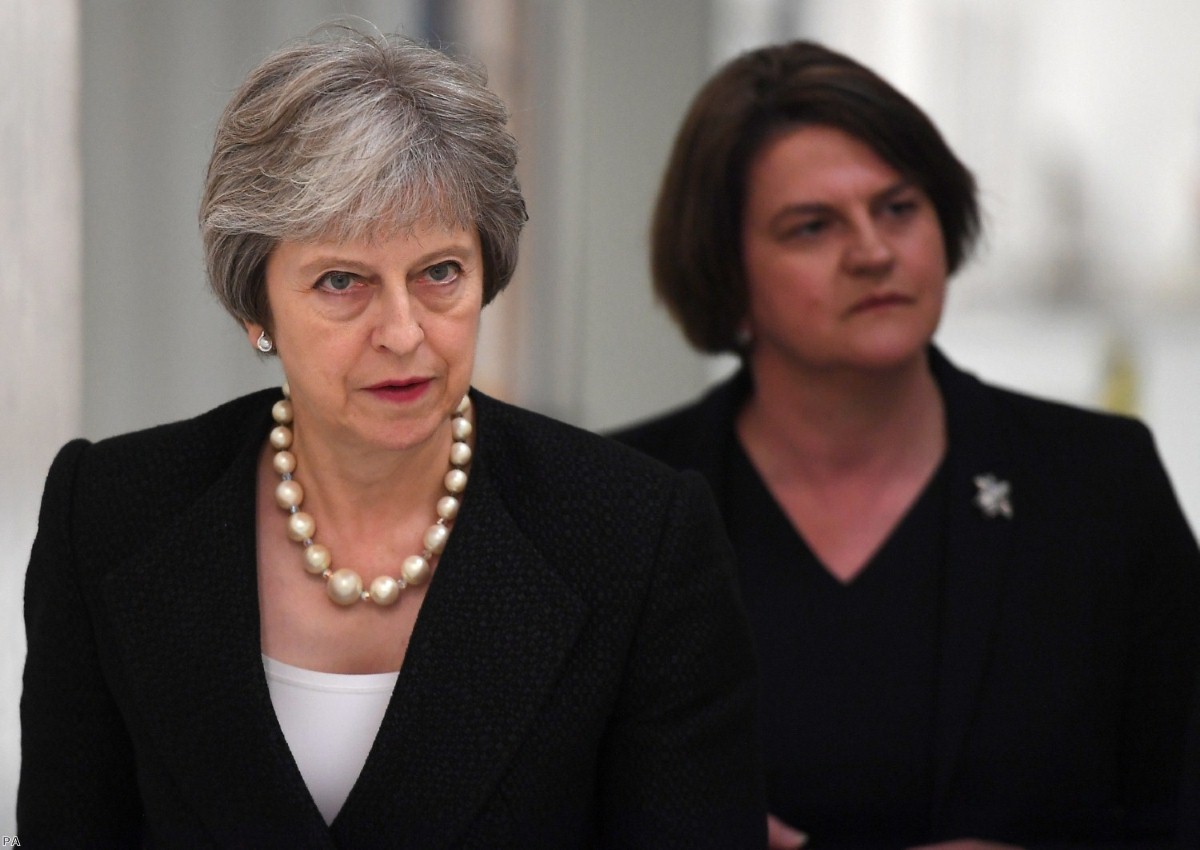 "The future's bright, the future's orange," quipped the DUP MP Ian Paisley just 13 months ago, as Theresa May agreed the terms of a confidence and supply arrangement with the party following the loss of her parliamentary majority.

Their ten MPs would keep the prime minister afloat in return for £1.5 billion in extra funding for Northern Ireland, mainly to spend on DUP hobby horses. It had not been long since the Northern Ireland Executive had collapsed, over a scandal over a commercial heating grant Arlene Foster had brought in with liabilities approaching £1bn. It was a remarkable turnaround.

But just a year on and the air is fast coming out of the DUP’s tyres. They face mounting tactical and strategic problems. People are starting to ask: Is this the beginning of the end for them?

The DUP have only ever really been voting fodder to the Tories, plugging the self-inflicted gap from May’s rash decision to go to the country last year. Scottish Tory leader Ruth Davidson and former education secretary Justine Greening both let it be known that they were deeply concerned by any tie-up with the DUP because of their frequent bouts of homophobia. Affection for the Duppers is in short supply, even among the Conservative and Unionist Party.

Moreover, they have had to learn the hard way just how far British society has moved on, with the tabloid media treating them as little more than provincial cranks ('Coalition of Crackpots').

As for their deal to prop-up the Tories, well, the continued suspension of devolution in Northern Ireland means that most of the promised bounty they wheedled out cannot be released by the Treasury.

And although ministers are keen to restart talks about restoring devolution in October, this coincides with senior DUP politicians giving evidence to the Renewable Heat Incentive Inquiry under retired judge Sir Patrick Coghlin.

Emerging evidence from the public hearings suggests the final report is likely to be excoriating about Arlene Foster, the enterprise minister who implemented the policy without adequate cost controls in place.

Last week, Ian Paisley was barred by the House of Commons for a month, for not disclosing two luxury holidays to Sri Lanka, on whose behalf he later became a lobbyist. Tellingly, an anagram of Ian Paisley is ‘I nap easily,’ which on a first-class flight, I imagine he would. A petition to force a recall by-election looms.

The DUP's problems with hot money and influence-peddling are never far from the surface. It’s all a bit – irony of ironies – un-British. Perhaps the most egregious example is the 'dark money' donation the DUP took during the Brexit referendum, utilising Northern Ireland’s much-laxer party donation rules to accept £425,000, which was then used to take out pro-Brexit advertising in the Metro newspaper, which doesn’t even publish in Northern Ireland.

But these tactical difficulties and setbacks are as nothing to the strategic problems facing the DUP. Although it remains the largest party in Northern Ireland, it does so by a whisker. At the last Assembly elections, Sinn Fein came within 1,100 votes from topping the poll on the first ballot.

The Good Friday Agreement is elliptical about the exact trigger for a referendum on Northern Ireland’s constitutional status, but it beggars belief that a Sinn Fein victory next time around, perhaps with parties committed to a referendum winning a clear majority in the assembly, would not be enough to secure one.

The party was reminded just how mainstream predictions of Irish unity have now become by none other than their previous leader, Peter Robinson. Last week he warned about the risks of not preparing for the possibility of Irish reunification:

"I don't believe Northern Ireland will want to leave the United Kingdom, but if it does happen we would be in a terrible fix because we would be in the same situation as leaving the EU where nothing was negotiated or decided about what was going to happen after."

Typically, the DUP response skipped ‘reaction’ and headed straight to ‘overreaction,’ with the DUP’s gaffe-prone bruiser Sammy Wilson – a sort of Boris Johnson figure without the classics degree –sent out to chide his former boss and claiming talk of Irish unity was "an invitation to republican arsonists to come in and burn our house down".

Opinion polls tend to agree with Robinson though, with support for Irish unity just three points behind those in Northern Ireland wishing to remain British, according to a recent LucidTalk poll. Tellingly, a quarter said Brexit made them more likely to consider it. In this regard, Brexit, so ably assisted by the DUP, is likely to be their very undoing.

'The future’s bright, the future’s orange?' A defunct marketing slogan, from a company that no longer exists, having been subsumed into a larger entity.

Kevin Meagher was special adviser to former Labour Northern Ireland secretary, Shaun Woodward. He is author of A United Ireland: Why unification is inevitable and how it will come about published by Biteback.