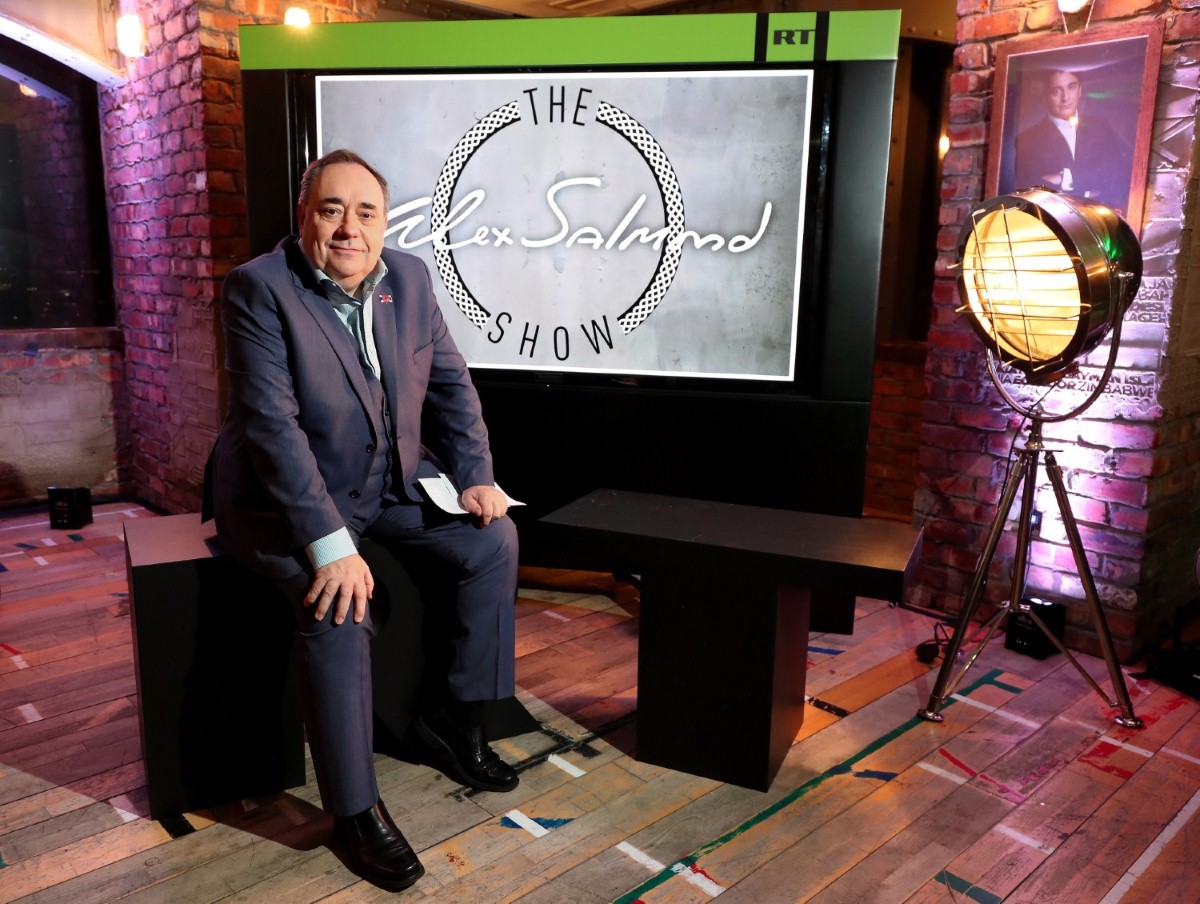 When Alex Salmond was interviewed about his new show on RT UK by Channel 4 News anchor Jon Snow last week, he accidentally flagged up a sinister reality about his latest venture. "It's edited and produced by me," he said. "Anything in that programme will be mine and mine alone, and the only decision RT make is whether they want to broadcast it or not."

In other words, Salmond is free to state his fiercely independent views – at the pleasure of Vladimir Putin. This logical trainwreck is more than just ironic. It goes to the heart of what people get wrong about the station formerly known as Russia Today.

Few people now would deny that RT is a propaganda outlet. Having pushed the Moscow line on everything from Ukraine to Syria, and magnifying the faults of Putin's foes while barely discussing his blood-stained kleptocracy, RT's nature could be judged by its fruits, even if you didn't know it was set up by Putin in 2005 to "give the Russian point of view".

Anyone can or should be able to tear apart the resulting hypocrisies. Take for example Salmond's show, humbly titled The Alex Salmond Show, which if it isn't Kremlin propaganda is certainly propaganda for Alex Salmond.

Episode One opens on Salmond in a three-piece suit looking like a cruise ship magician. His first trick is to read tweets from people who it has since transpired do not exist, and one which turns out to have been written by the show's director.

After a segment on sexism in British politics (not a problem in Putin's Russia, where women know their place) fellow recently out-of-work SNP politician Tasmina Ahmed-Sheikh talked up her party's record on gay rights. ("In recent years, Scotland has taken the lead in protecting rights for people who identify as LGBT…" etc.) We're free to assume that Salmond's failure to mention the oppression of gay people in Russia, where it's now a crime to even discuss homosexuality, and the purges, torture and detention of gay people in Chechnya under Putin ally Ramzan Kadyrov, was a decision Salmond reached independently.

We then have Salmond's knee-padded chat with deposed Catalan leader Carles Puigdemont on the justice of Catalan independence. (Salmond after the segment: "This may be a surprise to many watching. I have never called for Catalan independence. Not because I’m not sympathetic, obviously I am." Obviously.)

Again, Russia's patchy record on self-determination (Kosovo, Georgia, Ukraine, Syria), and violent suppression of its own separatist movement in Chechnya – resulting in Kadyrov's Putin-approved autocracy – was omitted by its newest employee. (Are these the sorts of policies Salmond had in mind when he said in 2014 that Putin had restored "Russian pride"?)

Even if we grant that Salmond commits these offences to broadcasting as the result of independent decisions, it doesn't change the fact that, as he says, RT decides whether to "broadcast it or not". In other words, if it gets on the telly, it's because RT wants it there. And RT has a unique set of criteria.

A guest or host on RT might only be talking about austerity cuts in Britain, or inequality in the United States, and their remarks might be full of truth, goodness and beauty. But they wouldn't have been invited on if their words don't fit what, if it were Fox News, people would know to call RT's "broader narrative", which is that western democracies are no better than Putin's dictatorship.

This is why anything produced for RT is Kremlin propaganda by definition, especially if "all it does" is report on the faults of Putin's foes. If I'm wrong, RT's rolodex of politicians, hacks and academics are welcome on their next appearance to add that all these problems – inequality, poverty, corruption, repression and war – are much worse in Russia. We'll see if they get invited back. I'd be surprised if their feet hit the floor.

So unless people want to have the truth they've spoken "twisted by knaves to make a trap for fools" they might want to avoid going on TV stations run by dictatorships. And try not to be one of the fools watching. As my friend James Bloodworth has written, it's risible to complain about media bias and then say in the same breath that you get your news from a Kremlin mouthpiece.

But this foolish tendency is exactly what the Kremlin hopes to cultivate, and thereby turn valid scepticism about politics and the media into outright cynicism. Democracy in crisis? Well, of course, democracy is a sham! What we need is great leaders who can take care of everything. Media bias? Naturally! Journalism is just politics by other means.

With the phenomena lazily (but usefully) summarised as 'Brexit and Trump', western democracies are getting a taste of where this leads. Hyper-partisan outlets like Breitbart and The Canary offer a glimpse of a possible future, where the faults of mainstream media are not so much corrected as embraced and surpassed. RT is not a welcome alternative, as Salmond would have us believe, but a cautionary tale. For us, it's a tyranny sampler. For the people of Russia, its all RT, all the time.