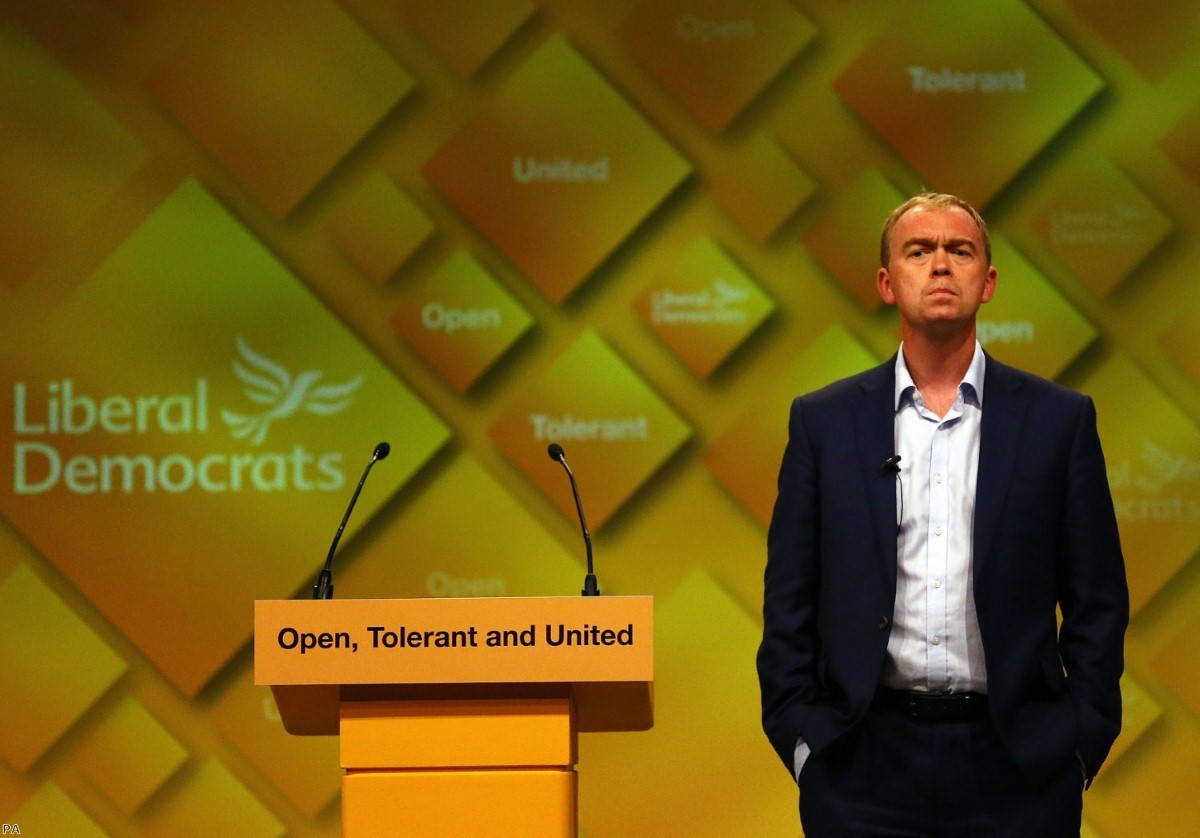 There’s plenty of standard, run-of-the-mill political strategy in the Tim Farron’s speech today. He sees an opening, so he takes it. And British politics is increasingly full of openings. The Brexit vote has dragged the Tories to the right, with most of the party now actively lobbying for a strategy which most experts agree would cost Britain jobs. Labour has been dragged to the eccentric reaches of the hard Trotskyist left by Corbyn.

You don’t need to be a political genius to  see the opportunity that opens up for the Lib Dems and Farron wasted no time positioning the party as the responsible but socially-conscious centre, the new New Labour – good for business, good for workers, good for refugees; open, rational and progressive.

Sure, it’s basically the same positioning Nick Clegg attempted just before the 2015 election. But that was sensible then and this is sensible now. They both have the same problem, which is the tarnishing of the Lib Dem brand. It’s unclear how much has improved in that respect, but the basic strategic decision is obviously sound. A Lib Dem leader would be mad not to follow it.

The remarkable thing about Farron’s speech isn’t the positioning, though. It’s the identity politics. He spends plenty of time criticising the Tories and the SNP for following the politics of division. But even in challenging them, he has to place himself on the identity politics map. This is the first conference speech by a Westminster leader which starts by assuming that we live in an identity politics world.

“I am a white, northern, working class, middle aged bloke,” he said in the opening minute. “According to polling experts, I should have voted Leave. May I assure you that I didn’t. But mates of mine did. People in my family did. Some of them even admitted it to me. And some of them didn’t.”

He then describes his home town. “Preston voted 53% to leave,” he said. “There were some places in Lancashire where two-thirds of people voted out. And I respect those people. If you’ll forgive me, they are my people. And if they’ll forgive me, I’m still utterly convinced that Britain should remain in Europe.”

When he turns his guns on Ukip and Nigel Farage, he says:

“There is nothing so dangerous and narrow as nationalism and cheap identity politics. But there is nothing wrong with identity. I am very proud of mine. I am a Lancastrian, I am a Northerner, I am English, I am British, I am European. I am all those things, none of them contradict another and no campaign of lies, hate and fear will rob me of who I am. But we lost didn’t we?”

Farron is using the language of identity politics, even as he challenges it. We’ve seen identity politics spread like wildfire on the left when it comes to class, race, gender and sexual orientation. North of the border, Scottish Labour is constantly complaining that they can’t get a hearing without paying tribute to identity politics.

That view has taken hold on the right, with Brexiter increasingly demanding an expression of national loyalty as a condition of political debate. The patriotism of Remainers is constantly brought into question. And it was telling that Farron today felt the need to frame his support for refugees in terms of his own patriotism.

The referendum – with its stark divisions between young and old, both sides holding seemingly incompatible world-views on social liberalism and diversity – cemented this. And now we see this language beng reflect, even having a hat tipped in its direction, by the leader of a major political party.

We’re in new ground here. The basic outline of the speech is the same as they’ve always been: personal story, strategic plotting, trying to inspire members. But the tacit way in which Farron feels he must outline his own identity before making his case against Brexit shows how rapidly our political conversation is changing.

The speech was very good, by the way: principled, genuinely angry, funny, and offering a clear, unequivocally liberal view of the world at exactly the moment that those ideas lie shattered on the ground. For anyone who felt the need to hear a mainstream politician express views which not so long ago would have been considered utterly conventional but now seem daring, here was Farron to provide it. Trade is good, diversity is good, we should be kind, we should pursue large-scale national change carefully and soberly. It’s basic stuff, but it now suddenly feels contentious because of the wave of lunacy which hit the country during the Brexit vote.

But the question remains, is there any point in a Lib Dem vote? Farron is right to target moderate Tories and – probably more realistically – moderate Labour supporters. But from a baseline of eight MPs can he really get into a position where the party are even relevant, let along in power?

The Lib Dem leader has a realistic strategy and realistic objectives. He wants to use the Lib Dems much-discussed ground operations to build from the bottom up. Everyone should be targeting a ward, the wards should be helping the Lib Dems to take controls of councils, and the councils will help them to take back dozens of wins at the general election. “My challenge to you is to pick a ward and win it,” Farron said. It’s not exactly ‘go back to your constituency and prepare for government’, but it has the virtue of being credible. With a very positive view, it might just work. But even if it did – so what?

Getting a few dozen more Lib Dem seats in 2020 – the target Farron himself set – is a functionless achievement. If May, as expected, triggers Article 50 in the new year and EU leaders, as expected, make us stick to the two year timetable, the Brexit negotiations will be long gone by then. We’ll already be in whatever situation the Tories put us in.

Farron needs an extension of the timetable, just like British negotiators do. And he’s unlikely to get one. So while his plan is a good one and his strategy is sound and the speech was well written and delivered, it remains a compelling proposition rather than a realistic one.