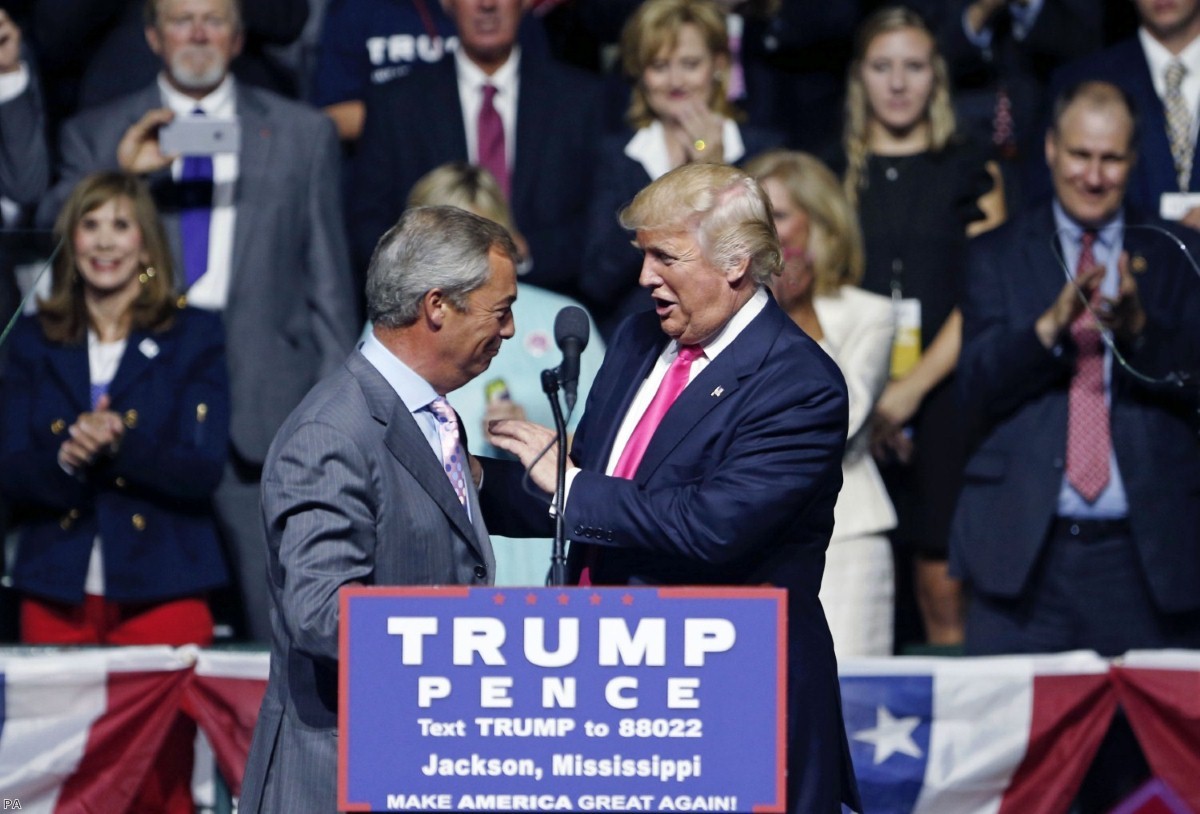 For years, Nigel Farage's opponents in the UK have been highly reluctant to label him as either a racist or a bigot.

When Farage said in 2014 that he would be worried about Romanians moving next door to him, Labour leader Ed Miliband criticised the comments but refused to label Farage as a racist.

Pushed on the issue by Sky News, Miliband replied that while the comments were "a racial slur" he didn't "think of Nigel Farage as a racist himself… I've been careful of characterising him personally as a racist."

Even when Farage revealed a poster showing hundreds of brown-skinned refugees on their way to Britain with the slogan "BREAKING POINT", his opponents were reluctant to use the 'r' word about him. Even the fact that the poster was almost identical to actual Nazi propaganda wasn't enough to tip the balance.

On the left: an actual Nazi propaganda film
On the right: Nigel Farage, today pic.twitter.com/Fg9cQmcdzQ

Despite all of this, Farage has successfully avoided the label of racist, at least within the UK. Whereas foreign publications often label Farage and Ukip as 'far right,' the British press have been very reluctant to do the same. In some respects this is justifiable. Whatever Farage's own prejudices, Ukip is nowhere near at the same end of the political spectrum as the BNP, National Front or Britain First. While Britain First have gone out of their way in the past to support Farage's party, with the slogan: "Ukip at the ballot box, Britain First on the streets" the two organisations are distinct entities with quite different political traditions.

In fact, Farage's success at distancing Ukip from the far right has been one of the key elements of their rise. By positioning Ukip as the acceptable face of anti-immigrant politics, Farage has shed much of the stink that previously attached to such parties in the UK.

However, since standing down as Ukip leader Farage has become noticeably less careful.

At the end of last year, in the run up to the EU referendum, Nigel Farage criticised Donald Trump's proposal to ban all Muslims entering the US. When most pundits were still predicting that Trump's presidential run would crash and burn, Farage said that his comments had "gone too far" adding that "I think Mr Trump’s somewhat knee-jerk reaction to this, saying that all Muslims should be banned from coming into America was perhaps for him a political mistake too far."

Yet far from killing off Trump's campaign, the comments helped propel him to a crushing victory over his Republican rivals. Now with the EU referendum successfully won and Farage looking for work, his previous distaste for Trump's comments appears to have evaporated.

Appearing on stage with the Republican nominee last night, Farage told the crowd of Trump supporters that: "if you want change in this country, you better get your walking boots on, you better get out there campaigning."

Thank you @realDonaldTrump for the tremendous introduction. Decent people can beat the establishment!https://t.co/5WVLDF8P7j

In particularly weasel words, Farage said that he would not tell Americans how to vote, but added that he wouldn't back Hilary Clinton "if you paid me".

If it still wasn't clear who he backed in the presidential race, he added:

"I'm going to say to people in this country that the circumstances, the similarities, the parallels, between the people that voted Brexit and the people that could beat Clinton in a few weeks' time here in America are uncanny."

By so clearly backing Trump, Nigel Farage has finally revealed his true colours.

This is a man who in addition to calling for a ban on all Muslims entering the US, labelled Mexican immigrants as rapists, called for the expulsion of millions of Americans whose parents or grandparents happened to be illegal immigrants and used racist insults against his opponents. In the meantime he called for anti-Trump protesters to be beaten up, hinted at a crackdown against the press, raised the prospect of the US launching nuclear weapons, even against European countries, and suggested that his presidential rival could be assassinated. In short, he is a dangerous demagogue and fascist whose potential election would, in the words of one US commentator, be an "extinction-level event".

By effectively endorsing such a man, Nigel Farage has removed any last remaining veneer of respectability he once held. When he returns to the UK he should finally be treated with the contempt he really deserves.