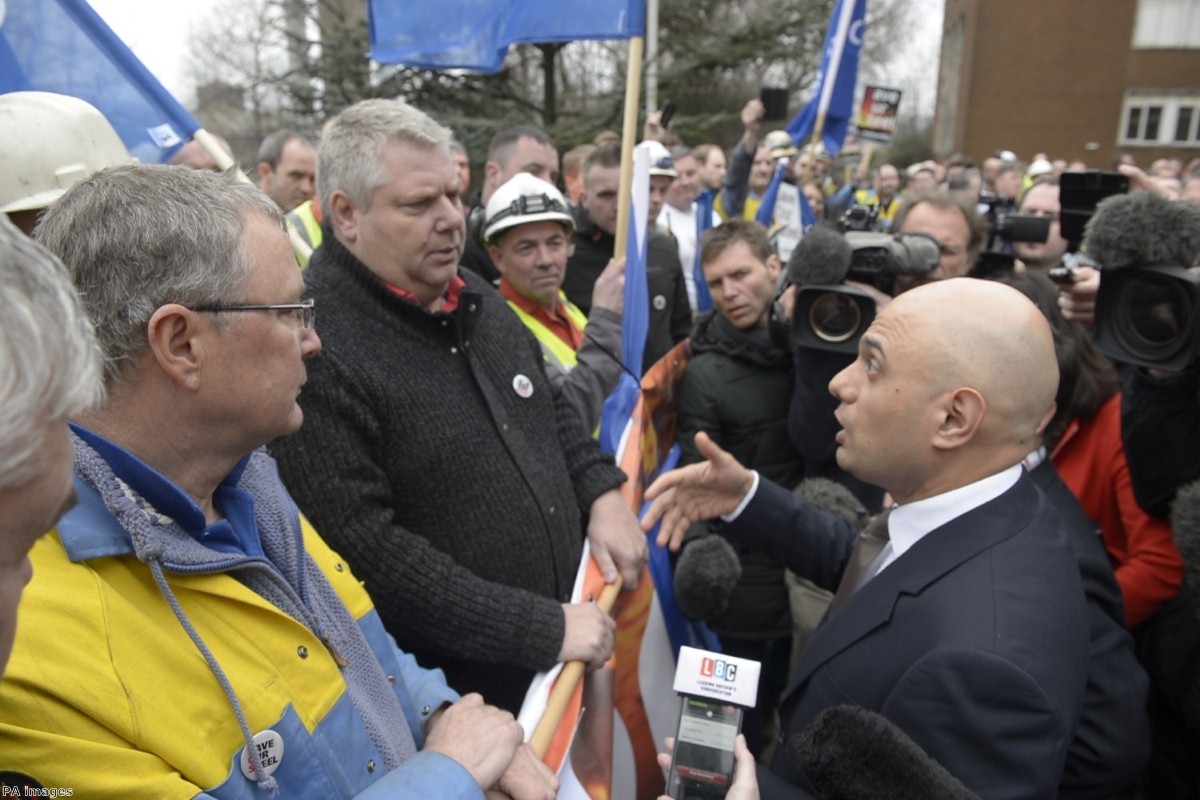 ‘Why hasn’t he resigned?’: Tata steelworkers have little faith in Sajid Javid

The possible closure of the steelworks is the only topic of conversation at the Port Talbot social club on Saturday night. News crews and politicians have descended on the town over the last few days but for many here the attention feels like too little, too late.

This isn't a crisis which has come out of nowhere, it's been brewing for years. If warnings by industry experts weren't enough to make the government take urgent action, then the closure of the Redcar plant with 1,700 job losses five months ago was surely the wake-up call ministers needed.

Apparently not. As union leaders and the town's local Labour MP travelled to Mumbai for crunch meetings with Tata last week, business secretary Sajid Javid was thousands of miles away attending a cyber security roundtable in Australia. Many of the steelworkers say it felt like a snub.

"It was frustrating that he wasn't there, he should definitely have played a bigger part," Daniel Malindo, who has worked at the Port Talbot plant for seven years, says. "It would've been a comfort to us to know he was there and trying to help.

"We were quite impressed that Corbyn arrived here so quickly. I suppose it's good that Javid finally turned up as well but that's kind of in his job description, isn't it?" he adds.

As Sajid Javid visits Port Talbot, our members have rallied to send a message that the government must #SaveOurSteel pic.twitter.com/2XhaWjoUGs

During an appearance on the Marr show yesterday, Javid admitted that Tata's announcement that it intends to sell its entire UK business took the government by surprise.

"What we actually knew was that it was an important meeting but when they made their announcement we didn't anticipate that they would go that far," he said.

Four thousand people work at the Port Talbot plant. If it closes, the impact on the local economy will be devastating. Figures show that one-in-three children in Wales lives in poverty – the highest level of any nation in the UK. The proportion of people in relative poverty is the highest in the UK outside of London.

Malindo has recently taken out a mortgage with his girlfriend and knows he is unlikely to find another job locally which will pay a similar wage to what he's on now. He believes that if the plant closes, many people will be forced to look for work abroad to earn close to what they do currently.

Like the steelworkers of Redcar, people here want to know why the government hasn't done more to prevent Chinese dumping (where a country exports a product for either less than the price of it in the domestic country or less than the cost of making it). "Look at America, they had a similar problem but they put heavy taxes on cheap imports and managed to keep sales in the country," one person points out.

Many feel that the government values Chinese investment to the UK far more than it does the British steel industry. Just days before the job losses on Teesside last year, David Cameron rolled out the red carpet for the Chinese president. His assurances that he would raise the issue of dumping with Xi Jinping seem to have had little effect.

Javid told Marr that reports of Britain being the ringleader in attempts to block higher tariffs on cheap Chinese imports were misleading. But over in Northamptonshire, where around 500 jobs are at risk in Corby, one worker I speak to struggles to believe the business secretary's claims.

"It's a load of bull," Mick Huxtable says. "To be honest, I'm surprised he hasn't been forced to resign over this.

"Tata has been telling the government for years it needed more support. How does it look to them when no minister can be bothered to turn up at a meeting as important as the one in Mumbai?"

Huxtable has worked at the Corby plant for 28 years and is two years away from his pension. He's worried that even if a buyer is found, pensions could be at risk. "We are paid well and have a good final salary scheme but that's because the work we do is very dangerous," he says.

Mixed messages have been coming from the government over the last few days. Javid has repeatedly said he doesn't believe nationalisation is the answer but he insists all options are on the table. "I think John McDonnell spoke a lot of sense on Marr yesterday," Huxtable says. "The government says all options remain open but they keep saying nationalisation isn't the right thing to do so it's clear that's something they want to avoid."

Labour believes nationalising the plants on a temporary basis would give the industry time to stabilise and find a suitable buyer. They also want to bring forward major infrastructure projects like HS2 which require large amounts of steel. This plan seems to have gone down well with some of the workers Politics.co.uk speaks to, but none of them are interested in scoring political points. This is about far more than politics. Entire communities are at risk.

The next few weeks will be a worrying time for employees of Tata. The idea that the government would allow the plants to close seems unthinkable to many of them. But even if a buyer is found – there is talk of two possible buyers – they know massive job losses are still likely.

"It's all anyone can talk about around here, every shop I go in, they're talking about the works," Malindo says. "You've just got to have hope."