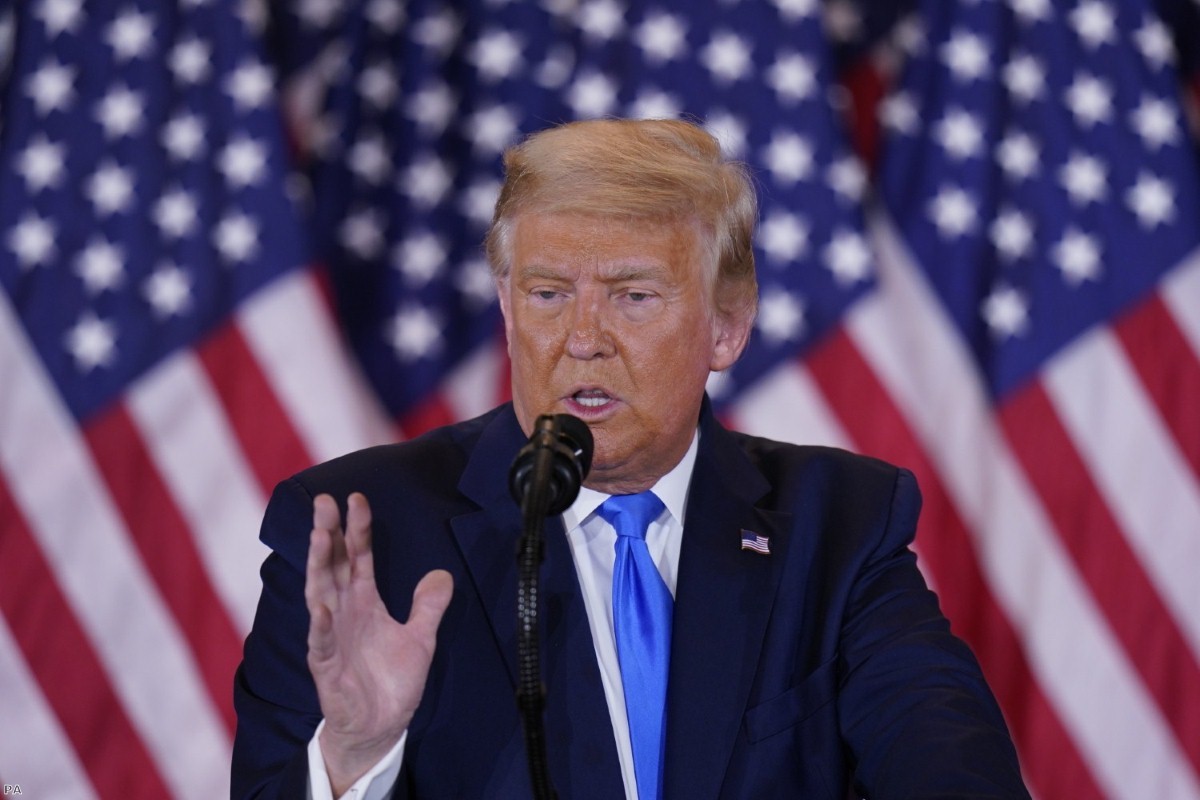 What we're seeing in America today is not just a disaster for the left, or moderates, or liberals, or whoever would naturally oppose this Republican administration. It is a disaster for those who believe in democracy.

Donald Trump is trying to rig the election. He emerged this morning, in a carefully coordinated media statement surrounded by cheering supporters, and insisted he had already won, even though votes are still being counted. He then demanded that voting cease where he thought he could lose. "We want all voting to stop," he said. It was a clear and explicit attempt to destroy people's democratic rights.

This would be alarming enough on its own. But it did not just happen today. It was clear from the very beginning that this was a tactic Trump would pursue. He worked to discredit mail-in votes during a pandemic on a baseless accusation of fraud. The reason early ballots haven't been counted in certain key states was because the Republicans changed the law to ban it. Trump then emerged this morning to insist they were not counted.

Call this what it is: an orchestrated attempt to subvert American democracy.

Trump's effort to undermine this election was explicit. It was obvious. Over and over again he refused to confirm that he would allow a peaceful transfer of power. He has been planning this right out there in public. And now it is happening.

There will always be would-be tyrants. Democracy is a robust obstacle to their emergence, but it cannot eradicate the threat. What is troubling here is not so much Trump's attempt to destroy American democracy, which we have priced in for some time. It's the fact that he was obviously going to do this and millions of people voted for him anyway. And that is the terrifying thing. That is the thing that sends a shiver through the spine.

Democracy cannot survive without people who believe in it. It cannot prevail if those who live under it support those who try to destroy it. It cannot endure if voters are so misguided, so lacking in trust in the media and the electoral system, that they believe the president's lies.

The rot is not just in the democratic process, but in its purpose. Voting is not just an expression of consent in government. It is also a protective shield. It is supposed to ensure that no leader can inflict damage on the public.

People don't vote for famine. That makes democracy qualitatively different from dictatorships, like Stalin's Russia, where man-made famines could be imposed on people because they had no opportunity to overthrow the government.

Except this time, it's different. People are voting for famine. Trump's track record on coronavirus is a full-scale intellectual, moral and operational failure. It is an act of criminal neglect, with a death toll of nearly a quarter of a million people. And this was not an act of God. It was the result of a man who suggested people inject themselves with bleach, who wouldn't support masks, who attacked scientific advisers, who encouraged the view that it was some sort of made-up Democratic party hoax, who encouraged baseless conspiracy theories.

Democracy is supposed to protect the public from precisely this outcome. This is exactly the kind of situation it provides safeguards for, by formalising the public's ability to replace governments which undermine their rights and put them in harm's way. But instead, millions have turned out to support the attack.

Those who secretly support Trump but daren't say so in polite company, or, more commonly, who approve of the global nationalist wave while perhaps finding him somewhat uncouth, will call this sort of analysis hysterical. It is not. You must have the confidence to observe the reality of events as they transpire. The reality is plain and simple and must be stated outright: We are witnessing the attempted overthrow of American democracy. And millions of people appear willing to go along with it.