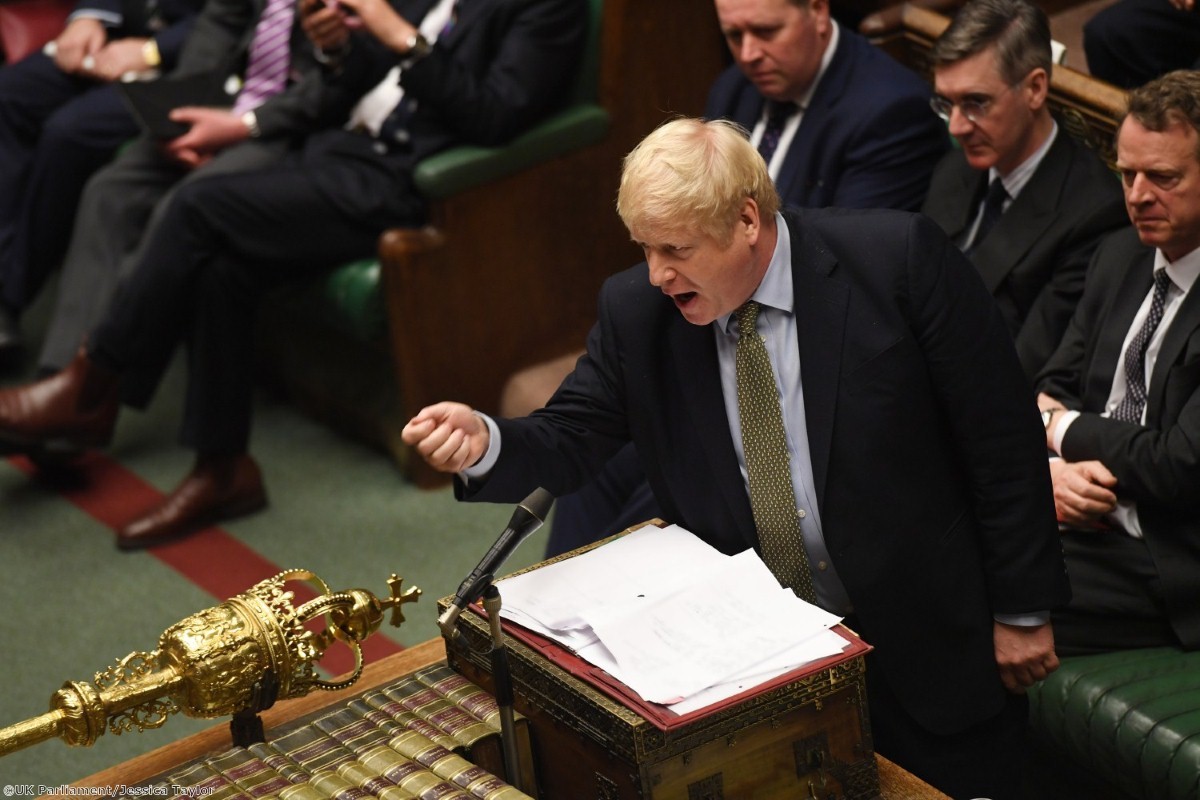 With his majority in place, Johnson chips away at EU citizen’s rights

They're proper sneaky, that's the thing about them. Boris Johnson has used the same tactic throughout. He makes a promise, then he breaks it, then he wriggles out of having to do the right thing afterwards. It's what he does. And for all his talk of being open and welcoming and liberal, it's exactly what he's doing right now on the rights of EU citizens.

The promise came during the EU referendum campaign. "There will be no change for EU citizens already lawfully resident in the UK," he wrote at the time, alongside Michael Gove and Priti Patel. "These EU citizens will automatically be granted indefinite leave to remain in the UK and will be treated no less favourably than they are at present."

A clear promise. It was broken immediately.

He is in fact doing the precise opposite. EU citizens do not automatically secure their status. They have to apply. And they are being treated far less favourably than they were before the referendum.

This system was put in place by Johnson's predecessor, Theresa May. But instead of using his time as prime minister to rectify it, he is chipping away to make it even less secure and give the government – not EU citizens – maximum control.

This week, using his new majority, Johnson bludgeoned the plans through. He ignored the requests of those saying that the system needed further safeguards. The pressure group the3million, which represents EU citizens in the UK, laid out detailed information on what people need and why. They were completely ignored.

His every approach to the issue followed one instinct: to avoid firm guarantees, either in law or regulatory supervision, and to replace that with ministerial assurances which aren't worth the paper they're printed on. This allows the tactic to work again in future – to make whatever promises you like now and leave yourself room to break them later.

As the withdrawal agreement bill drove through the Commons this week, opposition MPs desperately tried to firm up protections for EU citizens, through a series of amendments. Fine, so it wouldn't be automatic. But could the government at least get rid of its harsh deadline of applying for 'settled status' – the immigration category European citizens are being put in – by July 2021?

If you haven't applied by then, you get sucked up into the hostile environment. You become an undocumented migrant. The people who have lived with us for years, for their entire lives in some cases, will suddenly be cast into the grim inhumane reality of the British immigration system.

Ministers say that European citizens have plenty of time. But that's not how it works in reality. "Imagine a retired French lady and a young Polish guy," SNP MP Stuart McDonald told the Commons Chamber on Tuesday, as he fought a desperate rearguard action against the government's programme.

"The French lady has been here since the 1970s and had a permanent residence document under the old EU rules. Understandably, she thought she did not need to apply to stay, but it turns out that, of course, she did. The Polish guy was born here and because of that he believed that he was British, so he did not apply. However, it turns out that because his Polish mum and his UK father were not married at the time of his birth, he was not British after all, and he should have applied as well. Under the government’s proposals, that French lady and the young Polish lad will be subject to the full force of the hostile environment."

This is key to understanding why application systems are so dangerous, especially when it comes to one trying to function for three million people. Many people simply don't know that they need to apply. Just as during Windrush, they are so deeply engrained in British life, so fully part of it, that is simply never occurs to them.

Others are on the opposite end of the scale – very distant from public life. That might be because of geography, or culture, or language, or lack of digital skills. This is especially the case for vulnerable migrants and seasonal workers. The requirement to apply may simply never have become clear. And then suddenly, despite their legal right to stay, they will be thrown into the hostile environment machine.

These will not be small numbers. With so many millions of people of people needing to be processed, just a small percentage of individuals falling through the cracks means misery for tens of thousands, perhaps even hundreds of thousands of people.

Even outside of the programme deadline, there are countless other personal deadlines which create a kind of bespoke individualised immigration status cliff edge.

The settled status app churns out allocations of something called pre-settled status. This is supposed to apply to people who have been in the UK for less than five years. They have that status until the five years passes and then they are entitled to the full settled status.

In reality, anyone who has sat with people applying via the app will know that it hands out this status even to people with documentation showing they've been here longer. But many applicants, who are nervous of using the system and don't usually do things like this, will simply accept the status it gives them, regardless of whether it is correct or not.

At the end of the pre-settled status period, people need to apply for full settled status. If they don't, they will fall into the hostile environment. There are countless millions of these little personal cliff edges, which will start to come online around 2023, five years after the applications of the earliest adopters of the app, each one of them a potential tragedy.

The government insists it is being reasonable, of course. It's added six months leeway after the end of the transition period in December 2020 and even after that it will adopt a "pragmatic" approach to late applications. "If somebody had a good reasonable reason for not applying earlier, we will still process their settled status application – even after June 2021," it said.

But in fact it had no choice about this. It was locked in by the withdrawal agreement. The text agreed with the EU guaranteed that the "deadline for submitting the application shall not be less than six months from the end of the transition period" and that the government will allow people to submit late applications "if there are reasonable grounds for the failure to respect the deadline".

Overseeing the whole system is the snappily-titled Independent Monitoring Authority for the Citizens’ Rights Agreements. This is the watchdog which will assess how fair the process is and if the government is complying with the requirements of its deal with the EU.

The exact composition of it is unclear right now. There'll be executive and non-executive directors. Sources suggest the government wants to hand this to the Ministry of Justice, rather than the Home Office. Advocates for European citizens want it led by the chief inspector of borders and immigration, who is at least one step removed from the government and has already worked on the issue. Alternately, a senior judge could be put in place.

But regardless of how it's constituted, the entire functioning of the watchdog has been fiddled with to make it more compliant. As Peter Foster reported in the Telegraph earlier this week, the EU have written to Brexit secretary Stephen Barclay raising concerns about the powers the government has given itself to abolish the watchdog.

After the election, Johnson went back and reworked some crucial sections of the withdrawal agreement bill to reflect his newfound power. Section 39 allowed the government to abolish the body and transfer its function to another public authority if it was concerned about "efficiency, effectiveness and economy" – a very vague benchmark.

No-one asked for this. When the Brexit department and the Home Office were asked if they wanted the powers, they said no. But No.10 insisted they stay in. Because if the body is at constant threat of being simply deleted, it is more likely to be compliant.

Wherever you look, you see this same approach: the government attempting to maximise the power it has to change or undermine the system and resisting any efforts to provide Europeans with guarantees.

It's the same with the right of appeal. This exists, but it is placed in the world of secondary legislation – ministerial power, which they can mess with at a whim. When the bill went through the Commons this week, opposition MPs demanded that it be made into primary legislation – put in the explicit world of the bill itself, where it would be harder to change. But of course the government rejected that. It wants maximum room to manoeuvre.

The same applies to judicial review – the mechanism people can use to take ministers to court to challenge their decisions. Section 11(3) of the bill allows a minister to "make provision for, or in connection with, reviews" of certain parts of the system. In other words, to change the judicial review rights.

What does this mean? We don't really know. It could be a lazy bit of let's-give-it-a-go civil servant flexibility. Or it could be an attempt to defend against future legal challenges. Or it could be a experimental test of the judicial review system ahead of a broader challenge down the line. It's just not clear. But the direction of travel is consistent with all the other examples: freeing the government from restraint.

In each case, the same tactic: refusing to listen to what migrants say they need, making the life of EU citizens harder and less secure, giving the government maximum room to manoeuvre.

It would be troubling anyway. But it is especially troubling given that the operating procedure of the prime minister always follows the same pattern: Make promise, break promise, betray immigrants.