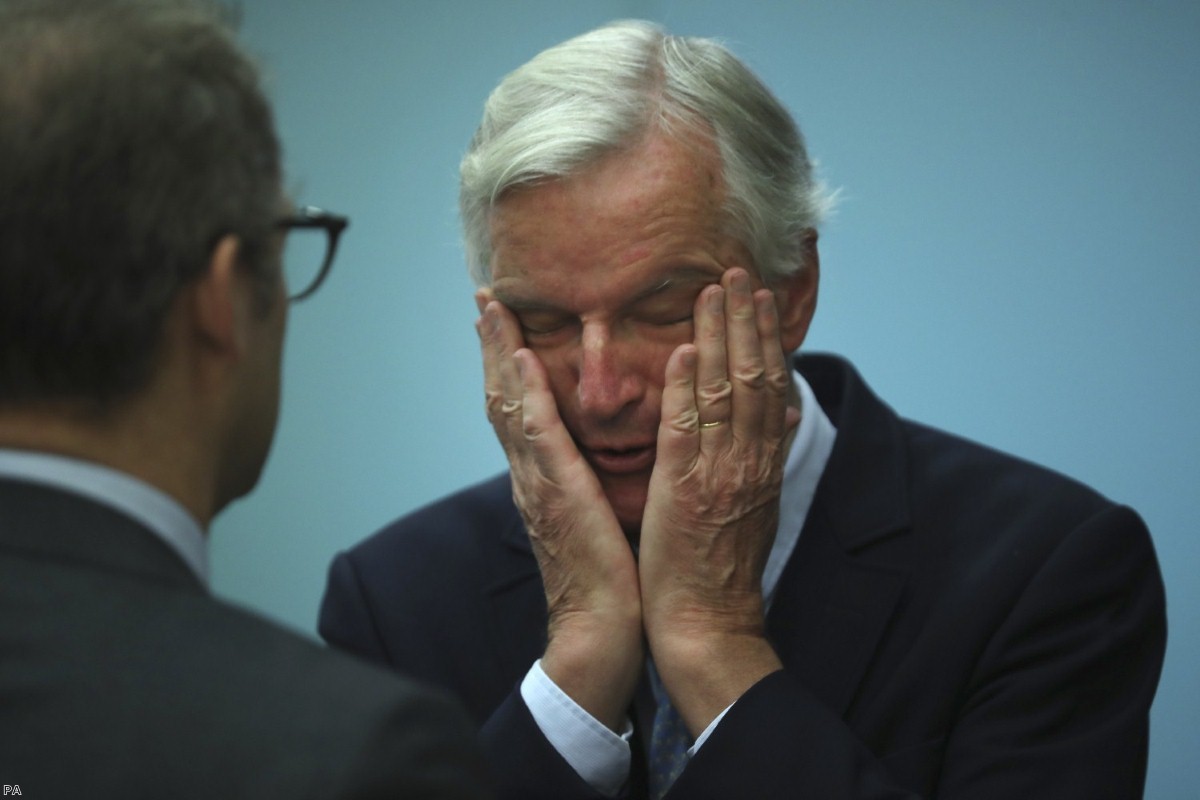 Brexit: What the bloody hell is going on now?

No-one knows what on earth is happening. Certain things written here will probably be proved wrong. Take a large shipment of customs-approved salt and pile it all over what you're about to read. We're all in the dark, and there are many variables. But here's an attempt to explain what's going on and what the chances are of a deal passing.

The fundamental Brexit problem the British government faces goes like this: It wants different customs and regulations arrangements from the EU after Brexit. Customs arrangements involve tariffs, which are taxes on goods going over borders. Regulations are the rules that territories put on products – for instance on agricultural standards. These also need checking when a good goes over a border, so you can make sure it conforms to your domestic law.

This means that the UK needs a customs and regulations border with the EU. There are three places to put it. The most obvious is between the UK and the EU. That would place it on the land border between the Republic of Ireland and Northern Ireland. This is a big no-no, as it involves checks and infrastructure, which both the UK and the EU committed to never doing.

So what options do you have then? You can put the border in the Irish Sea, allowing England, Wales and Scotland to drift away from the EU's customs and regulatory systems but keeping Northern Ireland in place. But the problem there is that it carves up the UK's territory. And more immediately, Boris Johnson relies on the votes – and general totemic political support – of the DUP, who would not agree to it.

The third option is to cover the whole of the UK in the customs and regulatory territory. You can do this while leaving the EU, but many Brexiters felt it negated the point of the project.

Wherever you put that line, it breaks promises made to someone. They've been countless attempts to find a sneaky way out of this problem, but none have worked. No matter how clever you are, there is no way around the fact that customs and regulatory borders exist and that you have to put them somewhere.

We have no confirmation whatsoever about the arrangement Johnson and the EU are cooking up, but it seems likely to involve some kind of variant of a dual customs arrangement.

What the hell is that? Well, first of all, as per Johnson's plan a few weeks ago, you split customs from regulation. On regulation, it was agreed that Northern Ireland and the Republic of Ireland would share rules on agriculture and industrial goods. This would put a regulatory border in the Irish Sea. To make up for this, Johnson gave the DUP a veto on the arrangement in 2025.

Customs is where it gets really wacky. The dual plan would see Northern Ireland technically remain in the UK's customs area while practically operating as if it was in the EU's customs area. It would essentially act like an agent of the EU at its border, collecting tariffs as if it was the EU. Some kind of tracking system would be put in place on the goods. If they were sold in Northern Ireland, which has the UK tariff, the importer would get a rebate. If they were sold in the EU, then nothing happens.

It's complicated, but it seems to satisfy both sides. There's no border in Ireland. It's in the sea, where you need all sorts of infrastructure at the ports anyway, so it's all less visible. The EU get assurances that their customs territory is safe and securely managed. The DUP get to take part in future UK trade deals. The British government gets to leave the EU's customs and regulatory arrangements.

The trouble is what happens between the idea and the details.

What happens if a Northern Irish citizen decides that a new EU customs rule has been applied wrongly at the port, or violates some other EU law? Where does she take the case? It can't be the UK courts. They have no jurisdiction. So it would presumably be the European Court of Justice. But removing the jurisdiction of that court is one of the central aims of Brexiters.

Who are the customs staff on the border in Northern Ireland? Are they EU or UK? The normal answer would be UK. After all, national bodies are expected to enforce EU rules. But do they really trust a non-EU country to do this – especially one which has proved highly changeable over the last few years and which just a few weeks ago was promising to actively disrupt the EU if it had to extend Article 50?

But what happens when the salt goes into other things, like supermarket pizzas and microwave meals? Intermediary products very quickly get swallowed up in the slush. There will now be a very strong financial incentive for the importer to overstate the amount of salt which went into the area with the lower tariff rate. How do you check for that? It is insanely complicated.

This is why the EU wants a legally operable text before they can say that any deal is done. The UK, on the other hand, seems to want it to be all blue-skies-thinking, so they can secure their October 31st exit date and then to work out the details afterwards.

The problem is that this stuff can live and die on the details. For the EU to allow a wishy-washy version in the hope that its negotiating partner will help sort it on the other side, when the pressure is off, seems unrealistic. And don't forget that this whole is supposed to be up and running by the end of 2021, which seems a tall order. British IT programmes do not have winning track records.

But it is also unrealistic to try to create a legal treaty addressing these problems – and countless more – in the next few days, or indeed before October 31st.

The details will also be where the coalition needed to vote for a deal in the Commons fractures. Over the last few days the government seemed confident it had the numbers. The main thing was that Johnson was supporting it. Brexiters trusted him in a way they didn't trust May. They believed that, if they could swallow a few things, he'd ultimately work to pull Britain right out of the EU's orbit. That made the details for them fade into the background. It's about who is doing something rather than what it is.

The DUP were reportedly being bunged cash. Then there were the purged Tories. They were mostly pro-deal so would probably grudgingly back this too. And there were now a few Labour MPs who regretted voting against May and might go for it. That would add up to a decent majority.

But all of this was on the basis of there not being any details, just a general description of what the overall system would be. Once those details were out, things could change. ERG types could see them and be appalled. Labour figures would recognise that Johnson's commitment to leaving the EU's level playing field provisions on workers rights and environmental protections meant they could never vote for a deal. And anyway, Johnson getting a deal would massively increase his chances of winning a general election. Would any Labour MP in their right mind support that?

And then there was the DUP. Frankly, it was amazing that they were still on board at all. Whatever one might think of their politics, they had always been resolute and principled on this issue. Or rather, the protection of the Union took precedence over Brexit for them. Why would they use an unparalleled period of influence to undermine that?

What they seemed to be accepting was quite remarkable. Sure, they'd be in a future UK trade deal. But so what? Trade deals really don't move the dial that much on economic performance. And the customs checks on the Irish Sea would potentially be vast. They would include country-of-origin checks establishing where products are made in order to see that they satisfy free trade agreement conditions.

Then there were the regulatory checks to consider. If Britain went off and did a trade deal with the US, it would probably end up dropping its standards on agricultural goods, including chlorinated chicken, hormone injected beef and the use of antimicrobials.

Take the chicken alone. That product is now going to be swept into the UK market. When you buy a whole chicken, you might check where it came from. But when you get chicken nuggets, or a chicken sandwich from a supermarket, you don't care. It doesn't occur to you. That's the cheaper stuff and it would be disproportionately likely to be brought in from the US.

So now the regulatory checks in the Irish Sea have to become much bigger. They're not just on containers of chicken but processed food. The more the UK secures free trade agreements elsewhere, and deviates from EU rules, the harsher and more substantial the checks.

Sure, those checks are happening in the more innocuous location of the sea border. But the incentives are there for them to get bigger and bigger. Is that really something the DUP would actively throw their weight behind?

It seems likely that the DUP's sanguine response to this was based on the veto that Johnson had offered them in 2025. Maybe they thought they could live with it because they intended to kill it in a few years. But the EU is questioning that too. It wants some kind of broader consent mechanism – that would probably involve all the parties in Stormont or even a referendum. That could kill DUP support.

It's hard to see how they could possibly accept this, no matter how much money they're offered. And if the DUP don't support it, others in the ERG, the purged Tories, and Labour's pro-deal contingent will be less likely to support it too. The Commons coalition falls apart.

Once again, all of this might be wrong and it might be proved wrong very quickly. The convictions of Brexit supporters are malleable things. Many of them are now supporting what they once said they'd never agree to. Maybe the deal looks nothing like this. Maybe a detailed text can be produced in time which satisfies everyone. But that's where we seem to be right now. What happens next, God alone knows.