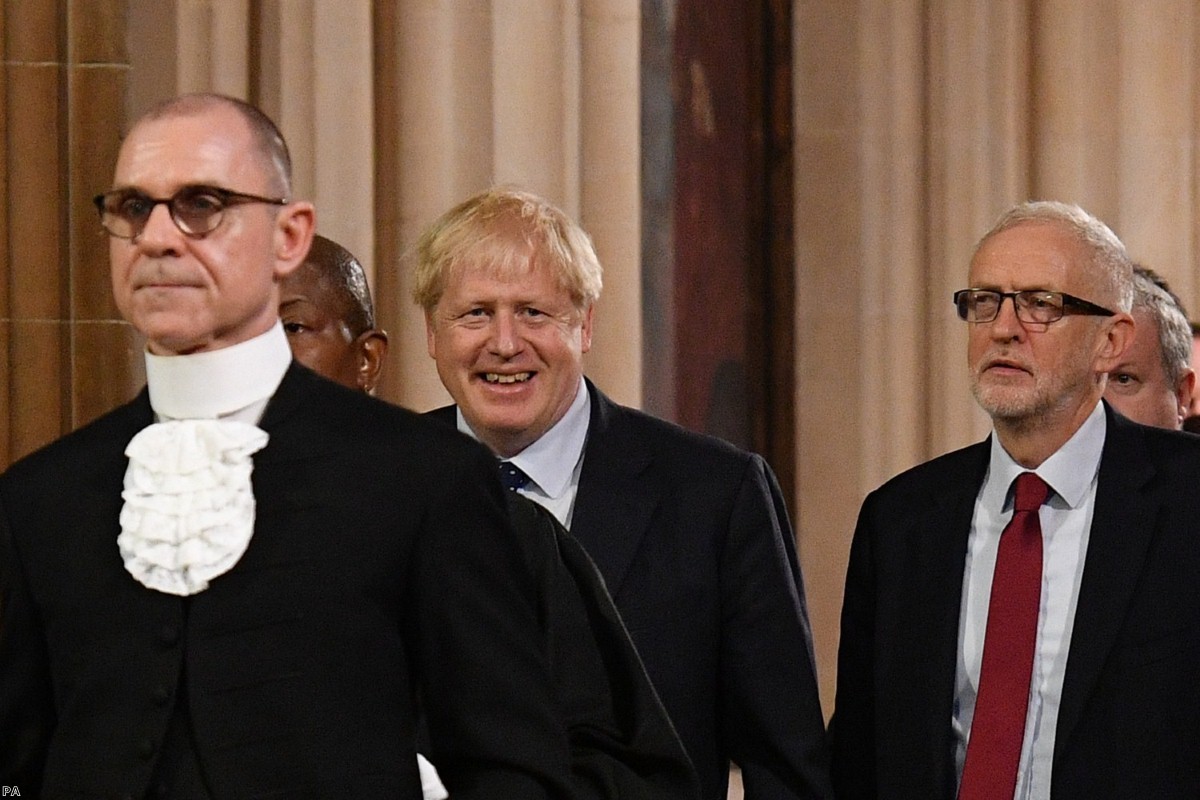 Whenever you think things can't get any weirder, they prove you wrong. Today's Queen's Speech saw the government put forward a legislative agenda it had no intention to pursue, no majority to pass, and no capacity to deliver. It's legislative taxidermy: the surface of governance without any of its life force.

Queen's Speeches are there to lay out what the government intends to do. Once upon a time, they outlined the bills the government was going to pass. What sweet naive days of youth they were.

Boris Johnson is now using the Queen's Speech to basically deliver an election manifesto. He is in a fundamentally illogical position. Either the government intends to hold this parliamentary session to pass these bills, or it intends to hold an election. The two things cannot both be true.

If he holds the election, there is no guarantee he'd be returned to power. And if he does not, he anyway cannot get the bill through because he has no majority.

In fact, he doesn't have the majority to win support for the Queen's Speech as a whole, let alone as individual items. That would once have been a deal-breaker. Before the Fixed Terms Parliament Act, governments would fall if they couldn't win support for even the broad outline of their legislative agenda. After all, what was the point? How does a restaurant stay in business when it has no food? But those days are now over as well.

Even if that weren't the case, all of these bills are contingent on Brexit actually being done. But that seems a distant prospect at the moment. The real action today was not in parliament but in Europe, where officials are still trying to work out if there's anything they can do with the British proposals for a dual-customs arrangement. If not, it all falls down. If they can, but Johnson doesn't get it through the Commons, it all falls down.

And yet sat there at the top of the list of government bills was the withdrawal agreement bill for leaving the EU. What's in it? No-one knows. That is still being negotiated. When could it be brought to the Commons? No-one knows. Are we even leaving? And if so when, and under what terms? No-one knows that either. It's not just the existence of this Queen's Speech which is semi-fictional, it's the content of it too.

The reason we never saw May's is because of the same old nightmarish entanglement of problems. Free movement wasn't ending, we didn't know how to replace it, it did in fact turn out that we needed immigrants across all skill categories, we wanted the option of using immigration requirements as leverage in future free trade negotiations with the EU, and we were starting to realise that just saying 'points-based' over and over again doesn't accomplish anything when you haven't worked out how to allocate them.

This was followed by a whole barrage of bills on law and order, chucked forward in a bid to show how tough the government was ahead of an election. But even here, it seemed to be mostly gibberish.

We're told the government wants to tighten restrictions on serious violent offenders by stopping them only serving half their sentence. But as the Secret Barrister pointed out, the vast majority receive life sentences or extended determinate sentences. Other parts target foreign criminals who breach deportation orders – at which point we'll now imprison them for longer than the existing ten weeks and thereby keep them in the UK longer, at the taxpayers' expense.

It's hardly surprising that the content doesn't make sense. Content itself, as a concept, is the enemy of this manner of conducting government. The new political agenda is about what is perceived to be the case rather than what is the case. That's why the proposals are empty, the bills are pointless, the Queen's Speech is redundant and the government can't even pass it. We are so far beyond the looking glass it's a wonder if we'll ever get out again.