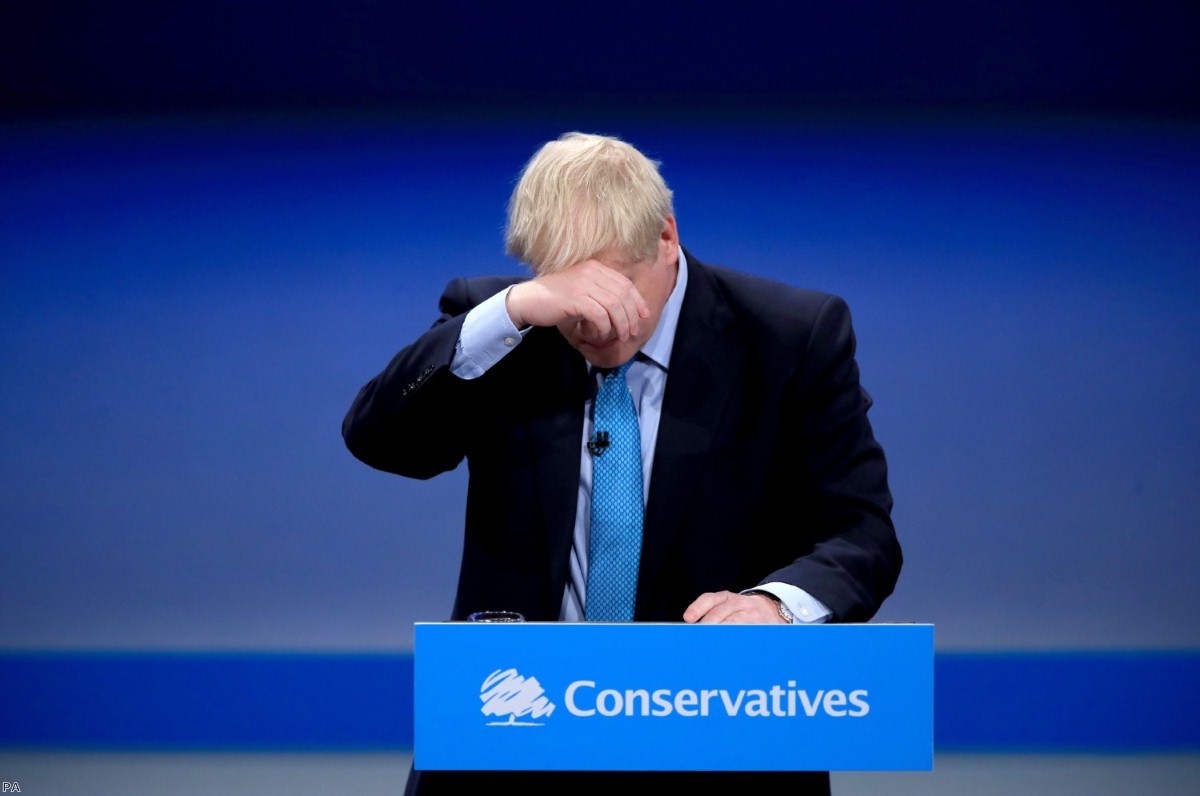 Johnson’s Brexit plan: No viability, no decency, no hope

It was only moments into his speech that Boris Johnson started lying. "We will under no circumstances," he said, "have checks at or near the border in Northern Ireland." It was false. Overnight, the details of his Brexit proposals to Brussels had leaked. They showed that there clearly would be checks. The British commitment to preventing any customs infrastructure in Ireland would be broken.

Once upon a time, Johnson could make these claims because he was engaged in the magical thinking of 'frictionless trade' and 'alternative arrangements'. There's no excuse for that now.

The Johnson offer to the EU will be published this afternoon, but last night's leak by the Telegraph's Peter Foster was largely corroborated by the details the prime minister offered in his speech. It works by separating out two elements of a future trading relationship: customs and regulations.

Customs involves the assessment of tariffs on goods. Regulations involve checks on whether the goods comply with the rules of the country they're being  sent to. In the EU, none of this matters – you have the same tariff regime and the same rules. Outside the EU, it all needs to be checked.

Johnson's plan sets up two timetables – one for customs and one for regulations.

The customs timetable kicks in first. His deal, like Theresa May's, would have a short transition until 2021. But after that, Northern Ireland and the rest of Britain would leave the customs union with no backstop. Johnson is taking no prisoners here. He is refusing any concessions. The lock keeping Northern Ireland attached to the Republic is gone. That means checks.

How would Johnson try to avoid them? He plans to have a free trade agreement (FTA) with the EU. But that's extremely unlikely to be achieved by 2021. Free trade agreements between major partners take a long time. The one between the EU and Canada took seven years.

But even if he did manage it, there would still be checks. FTAs can hammer down tariffs between countries. But even when that's done, goods have to go through a laborious process of checks, called country of origin requirements, to ensure they're really from the state they're being sent from. This is so that other countries can't surreptitiously sneak their way in with no tariffs as part of a trade deal they didn't negotiate.

The government rubbished a previous leak this week which said there'd be customs posts on either side of the border to do these sorts of checks. But actually it seems inevitable that there will be. Their promises to the contrary are meaningless. They rely on the idea that new technology will magically be invented in the next two years to make them unnecessary. This will not happen. It is one of the great myths of the Brexit argument.

This plan is a complete rejection of the British government's commitment in the December 2017 joint report to avoid a hard border, or any physical infrastructure, or checks or controls. It goes against the promises made to the people of the island on both sides – the Republic, which had no say in all this, and Northern Ireland, which voted against it. There is no consent from these communities for these proposals. They have made clear they are against what they propose. Johnson wants to impose it on them regardless. It is a threat to the peace process. It is a betrayal of the promise of continued north-south cooperation. It is a complete and total abdication of moral responsibility.

The approach to regulations seemingly involves more concessions. Northern Ireland would remain aligned with the EU on agricultural and industrial goods regulations. This is dynamic, meaning that as the EU updated its rules, they would update theirs.

On the face of it, this seems significant. It would involve checks on the Irish sea between Britain and Northern Ireland, which is the kind of thing the DUP – whose votes Johnson would need to get a deal through – vociferously objects to.

But there's a catch. The alignment only lasts until 2025. At that point Northern Ireland gets a say on what happens. Does it want to stay aligned to the EU rules or join the rest of the UK? In practice, this gives the DUP a veto, which they will invariable use. The language is democratic, but in reality it simply serves to stagger the regulatory departure.

It's quite a remarkably tone-deaf package. Basically the UK is taking a bullying position to the EU without having anything to bully them with.

Think about their incentives. This is the kind of thing which is essential to successful negotiation but which the Johnson administration is seemingly incapable of.

If Brussels accepted the package, Ireland would be thrown under the bus. It would be a complete betrayal, something they have made clear they would never do.

That's not just a moral point. It is a strategic one. If they go against Ireland, no other member state would trust them again. The offer the EU makes to countries – that they become stronger by working together – would be shown to be false.

So why do it? Johnson is presumably gambling on the fact that if they reject it they'd face no-deal, which would involve the border emerging immediately, without the lead-in to 2021 or 2025.

But this assessment is very weak, because the moral reality of that point is inverted. If the UK decides to leave without a deal, then the consequences are its responsibility. But if the EU signed up to this deal, then it shares that responsibility. And on the areas it cares about – checks on the border, north-south cooperation – those consequences would be equivalent to no-deal.

Such a move would also destroy the EU's credibility in negotiations around the world. It would be seen to buckle on all its key demands in the face of intransigence and threats. Why wouldn't other negotiating partners try the same trick?

But even aside from all that, the threat is empty because no-deal is not actually the consequence of the EU rejection of the deal. The Benn Act ensures that if there is no deal he must ask for an extension. He insists this is not true and that No.10 has found some kind of loophole in the legislation. Given his record, that is likely to be either false or a gross overstatement of some pitifully weak tactic. But even if it were true, parliament could work around it or see Johnson forced to retreat via the courts.

So the EU's incentives are not his deal or no-deal. They are his deal or extension. And extension opens up the possibility of a less insane negotiating team, or even another referendum with a result to Remain, making the whole border problem go away.

It's hard to come up with anything positive to say about this. It shows no understanding of the EU's red lines, no basic moral responsibility towards the problem in Ireland which the Brexit vote created, no consistency with the previous commitments of the British government, no viability, no practicality, no realism, and no concessions at all to the half of the population who voted Remain. It is almost impressive that after all this time they have come up with a proposal that has nothing whatsoever to recommend it.

Ian Dunt is editor of Politics.co.uk. His new book, How To Be A Liberal, is out in spring 2020 and can be pre-ordered here.