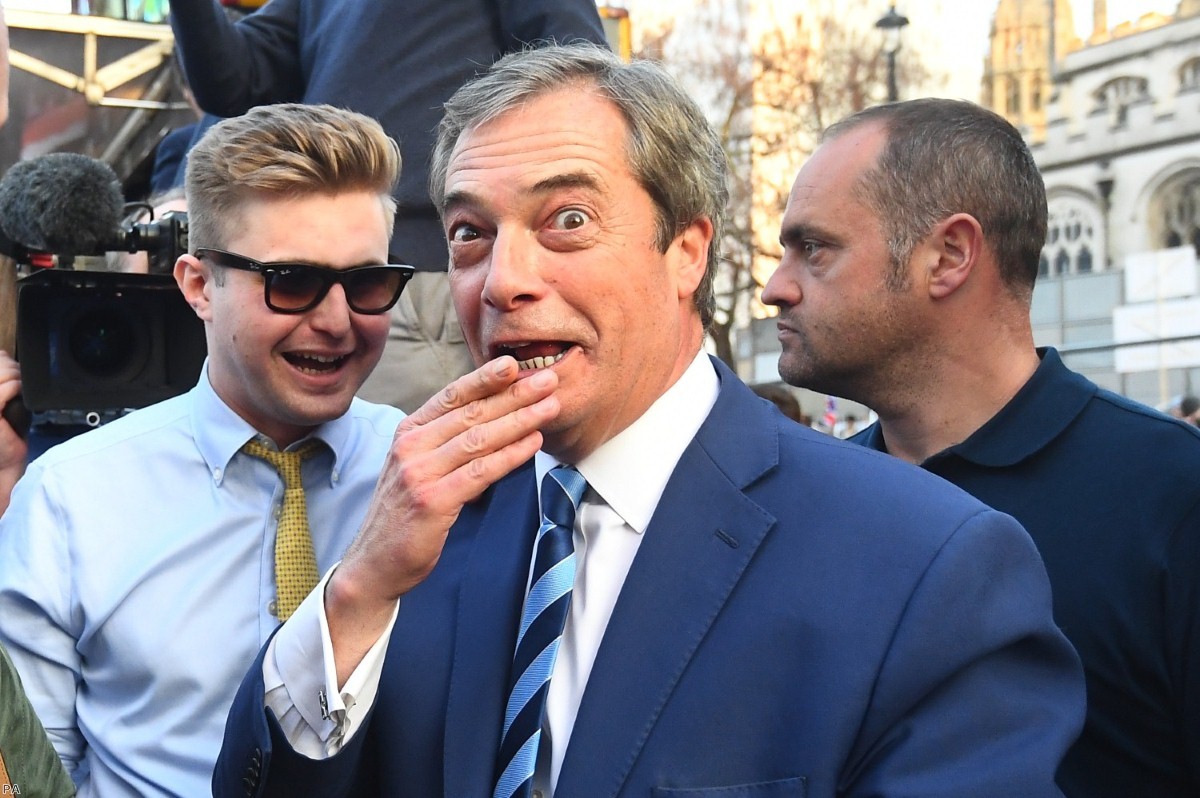 Remainers are making a pig’s ear of the European elections

Early days in the European election campaign, but it's not looking so good. A decent opportunity to show some Remainer muscle is being squandered.

Nigel Farage launched his Brexit party last week with a name which anyone in a ballot box can instantly understand, lots of media coverage and a clear mission statement. Remainer parties, on the other hand, are all over the place.

To call it a wasted opportunity is an understatement. As a voting block, Remainers are motivated, determined and keen to show their strength. In pre-referendum European elections, eurosceptics succeeded by motivating their support while most people stayed at home. Now that relationship has flipped right over.

He also faces a split in the eurosceptic electorate, between his new party and his old one, Ukip, which has now branched off to the far-right. The Hanbury poll put the Brexit party on 10.3% and Ukip on 7.5%. So that's a total of 17.8% for pro-Brexit parties.

This can change though. A YouGov poll today gave the Brexit party a whopping 27%. That number is not necessarily as impressive as it sounds. Ukip got around that much during the last European elections. It's a fairly standard eurosceptic vote, but one which now faces trouble with turnout.

Remain has motivation on its side, but it also has a very significant problem. Its own vote is split four ways. The Hanbury poll put the Liberal Democrats on 8.1%, Change UK on 4.1%, the SNP on 4.1% and the Greens on 4.0%.

This is a catastrophic divide. It means that outside of the SNP these parties might not even win a single seat.

The voting system used for the European Elections is called a Closed List Proportional Representation system. That means that parties select a list of candidates and put them down under their name. You go into the voting booth and put a cross by the party you want to support. The candidates are then selected to become MEPs in the order they appear on the ballot paper.

It's a Proportional Representation system, so it's better for small parties than first-past-the-post – the winner-takes-all system we use in general elections. But it isn't that good, because the seats are so small. The North East, for instance, returns just three MEPs. A party would need to get over 25% of the vote to secure a candidate. Even the South East, which returns ten MEPS, requires a party to get over 9.1% of the vote before it secures a candidate.

These graphs by Lewis Baston (he's very good on this – follow him on Twitter here) show just how punishing this could be for small Remain parties.

And here's how it translates into seats:

If Remain parties go into these fights competing against one another, they risk destroying their own chances. They're basically just robbing votes off other Remainer parties, in a way which could leave none of them with anything. It's madness.

Sure, Remain might end up doing as well as Brexit parties in the popular vote, but it won't matter. That's not how journalists think and it's not how Westminster thinks. They care about who wins: how many MEPs are returned and from which party.

A two-way split in the Brexit ranks allows them to still return loads of MEPs. A four-way split in the Remain ranks does not. The Lib Dems, Greens and Change UK could easily get none or just a handful. The SNP votes will be treated as a Scottish national phenomenon disconnected to Brexit. The narrative writes itself: Brexit parties triumphant, Remainers destroyed, proof that Britain wants MPs to get on with it. It's nonsense, but that's how it'll get written up.

The solution is obvious: Work together. There have been calls for an electoral alliance of the Remain parties in which they would share lists of candidates. Unfortunately, this goes against Electoral Commission rules. The only way to register with them is as a party and asking the Greens, Liberal Democrats and the rest to meld together is a step too far. Even if we could realistically do that, the deadline is over now. It's too late.

But there are things you can do short of that. The parties could still form electoral pacts and agree not to stand in areas where one of the alternatives stands a better chance.

There are difficulties with this. Firstly, it's not always clear which party does stand a better chance. The Lib Dems have name recognition and a proven capacity for campaigning. Change UK have only just come into existence. But on the other hand, the latter party enjoys far more broadcast attention, because it is composed of MPs which just left Labour and the Tories. It's a difficult business.

Nevertheless, the parties could have come to some kind of arrangement like this. They have utterly failed to do so. It feels like a rerun of the indicative votes process all over again: people with leadership positions on the Remain side failing to cooperate.

Change UK don't seem to be talking to anyone. They're very "contact shy", Lib Dems say. This is odd. They are, after all, literally based on the idea of cross-party cooperation. But in reality they feel association with the Lib Dems is the kiss of death and anyway – they want to take their place, not work alongside them. The narcissism of petty differences.

Chris Leslie is understood to be particularly hostile to the Lib Dems and people aren't having much success with Chuka Umunna either. Anna Soubry and Heidi Allen are thought to be more open.

The party has a major advantage. It is part of a media narrative. This is Farage's major advantage too. Votes for him highlight the damage to the Tories from unsatisfied Brexiters. That's a story. Votes for Change UK highlight the damage to the Tories and Labour from disaffected moderates. That's a story too. It can get you a lot of welcome coverage.

But so far they have not been particularly impressive on a strategic level. Change UK is a truly terrible name. It sounds like a charity putting out a daytime TV advert. And worse, it is now one of three names. They started as The Independent Group. Now that has been shortened to TIG in some of their literature. And they added the Change UK name. It's hard enough for a political journalist to keep track of. Any normal voter will be baffled and probably just associate them with any of the other smaller parties on the ballot paper. They're piddling away any chance at brand recognition.

The party could do well if it unveiled some prominent figures – especially non-party political ones – to run as candidates. That would be a strong approach and could see them suddenly win more coverage. But there is also a danger in running too far too fast. They are currently planning to contest a lot of seats. That will require lots of candidates. It's not clear right now if their vetting procedures are up to this task. If not, they could find themselves with lots of negative media coverage, when the old comments or social media posts of these people are inevitably dredged up by journalists.

Even if Change UK had made overtures to the Lib Dems, it's not clear they would have been accepted. The Lib Dems were first out the gate with lists of candidates, who had been selected by their party members. Once those decisions had been made, they were hard to take back. You would potentially upset members who voted and you would definitely upset the potential MEPs.

Parties like the Lib Dems really need to give people motivation. It's a hard slog belonging to a group which doesn't appear to figure in the national conversation very much. In many cases, especially outside of the party's stronger areas, the councillor or MEP candidate will be its only local activist. Alienating them, for instance by asking them to stand aside so another party has a free shot at a seat, can devastate your capacity in an area.

The Greens, meanwhile, don't seem remotely interested in working with anyone. They teamed up with progressives in 2017 and did petty badly out of it. They still seem pretty sore.

These guys all look set to commit a very silly form of hara-kiri by putting party political interests over the greater Remain campaign. But Remainers themselves can do a better job and take charge of this thing. If they won't do it, voters themselves will have to.
Online, and through the campaigning groups like People's Vote and Best for Britain, Remainers can be shown which party has the best chance of taking an area in mid-May, just before voting day, and then throw their weight behind that option.

That requires local polling, which we really have to hope someone is prepared to do. And it requires online coordination, which we know Remain is capable of. That 6 million strong petition demonstrated that. This is obviously much less effective than parties doing it themselves, because it's hard to reach voters. But it can be done and it had better be, or it could turn into a bloodbath out there.

There is no reason to despair. Remainers are more motivated. Lots of European citizens will finally be eligible to vote. Polling can shift very quickly once the campaign properly takes hold. The content of the Labour manifesto  -and especially whether it does or does not mention a second referendum – could suddenly change things in either direction.

But it's clear that Remain campaigners need to be the grown-ups, because Remain politicians often fail to live up to the moment.