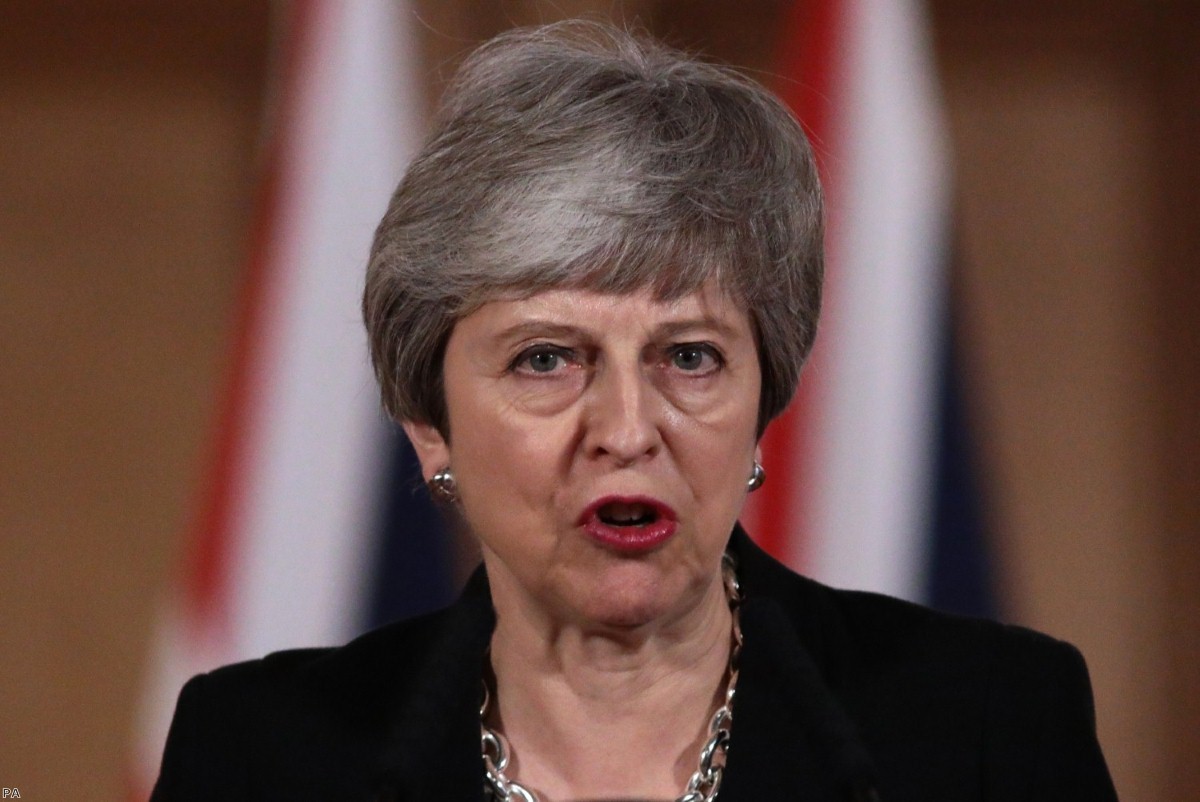 Week in Review: Theresa May’s only consistency is failure

You would have thought, by law of averages, that Theresa May would occasionally behave in a way that looked dignified or principled, even if only by chance, but it simply never happens. Every action she takes is defined by self-serving irresponsibility and deception. She is, if nothing else, utterly reliable. You can set your moral watch by her: Whatever she is doing, it is by definition the worst way you could possibly behave in the circumstances.

Take her letter to Donald Tusk this morning. The nuts and bolts of it are positive. She's requesting an extension to Article 50 to avoid a cliff edge next week. She is launching preparations for European elections so that we can extend further in the future. All good. But just look at the manner in which she framed all this.

Just hours before the prime minister sent her letter, reports emerged that European Council president Donald Tusk would offer Britain a one-year extension to next April. And yet in her letter, May still asked for a short extension to June 30th, even though she knew it would be rejected.

It is quite extraordinary how consistent her failure is. The facts change around her, but it makes no difference. She sees the offer, then does what she was going to do anyway, knowing that this will involve defeat in just a few days time. It's like the Brexit negotiations never went away: a British team with no imagination, no emotional or strategic intelligence, trying the same things over and over again to no avail.

Of course, May's real tactic is to blame the EU for forcing a long extension. She doesn't propose a realistic end date herself, because she wants to be able to pretend that it was pushed on her by Brussels. She is quite literally setting herself up for failure.

It is such a profoundly honourless way to behave. It has become very tiring indeed to watch this country be led by someone with such low ethical standards in their conduct. And worst of all, for the global media to be covering it while it happens. Brexit is not just reducing us in the world's eyes as a political project. May's manner, her approach to diplomacy, is so shameful that it is hurting the world's impression of what constitutes the British personality. She is making us look scheming and inept. You can get away with being one of those things. Being both is dreadful.

We are now stuck in the extraordinary situation of watching our negotiating partner force a more advantageous situation on us against our stated will. This is admittedly for their own reasons. They have no intention of holding emergency summits every month to extend the timetable again each time May fails. So they prefer a one-year extension which can be cancelled whenever a deal is agreed.

This is being termed – in the dreadful portmanteau manner we are seemingly condemned to inflict on ourselves – a 'flextension'. But in reality it is just the standard operating system for Article 50. The original legal text says that EU laws cease to apply "from the date of entry into force of the withdrawal agreement or, failing that, two years after the notification". There was no reason to think the extension rules would operate differently.

On the basic level of national self-interest – you know, the way most countries behave and which we did too not so long ago – asking for a short extension makes zero sense. It limits our options and thereby our leverage. May wants to get the deal done quickly. Fine. But what if she fails, which given her track record is not exactly unlikely? Then she needs more time. She would have to go cap-in-hand to the EU begging for a further extension, over and over again, more pathetic each time, our national reputation an expanding stain on the floor. Or, alternately, she could ask for a longer extension and then cut it short if she got it all done quickly. There is no downside to this. Any rational actor would pursue it. But it is not politically palatable at home.

At some point we have to realise that a culture in which rational self-interest and political acceptability are mutually exclusive is not healthy. It suggests we have gone functionally insane as a country.

The immediate consequence is that we are now being treated by our negotiating partner as a kind of charity case. A long extension actually gives up their time advantage, which they used to such punishing effect during the original Article 50 window. Now we have debilitated ourselves so thoroughly, made such an obvious and profound pig's ear of the whole thing, that the EU isn't even bothering to use all its leverage. It is an acute humiliation. It is like someone beating you in a fight while checking their phone.

But imagine for a moment that May succeeds, which – who knows? – might still happen. We put a man on the moon, after all. Perhaps the great scientific accomplishments of mankind could extend to the prime minister not making a catastrophic mess of things. What happens then?

If she succeeds by May 22nd, as originally planned, we will have held an election campaign for the European parliament, selected candidates, seen them tour the country and then, at the very last minute, they'll be pulled out and the EU will be forced to initiate back-up plans for those seats.

What a stain on our national reputation for us to be treating a democratic institution with such little respect. And this, of course, is being instigated by Brexiters whose entire argument rested on the absence of democracy in Europe. That democracy always existed and now we smear and sabotage it for our own grubby self-interest without even a flicker of recognition about the hypocrisy and shamefulness it involves.

Or perhaps she will succeed in her plan by June 30th, as she specifies in the letter – the date just before new MEPs take their seats. So in this scenario candidates would have been selected, campaigns conducted, constituencies toured, elections held, and then, the moment that the men and women selected by voters to represent them were about to take their seats, they would be whisked away like it was all a dream.

That is May's plan. That is literally what she is proposing. The fact she is so bad at her job that it won't happen is irrelevant. This is her intention.

What a limitless disgrace this is as a political proposition. What a full-time, 24/7, every-day-including-Christmas moral abyss she is. The prime minister has spent the last three years insisting that holding a second referendum would destroy people's trust in the democratic process. And this is how she behaves. This is how she treats elections. As something to be dismissively engaged in and then cast aside, like a bogey you can't flick off your fingers.

She really is absolutely shameless. There is no competition anymore, there is no question: She is, quite simply, the worst British prime minister of our lifetime, and quite possibly of anyone else's.