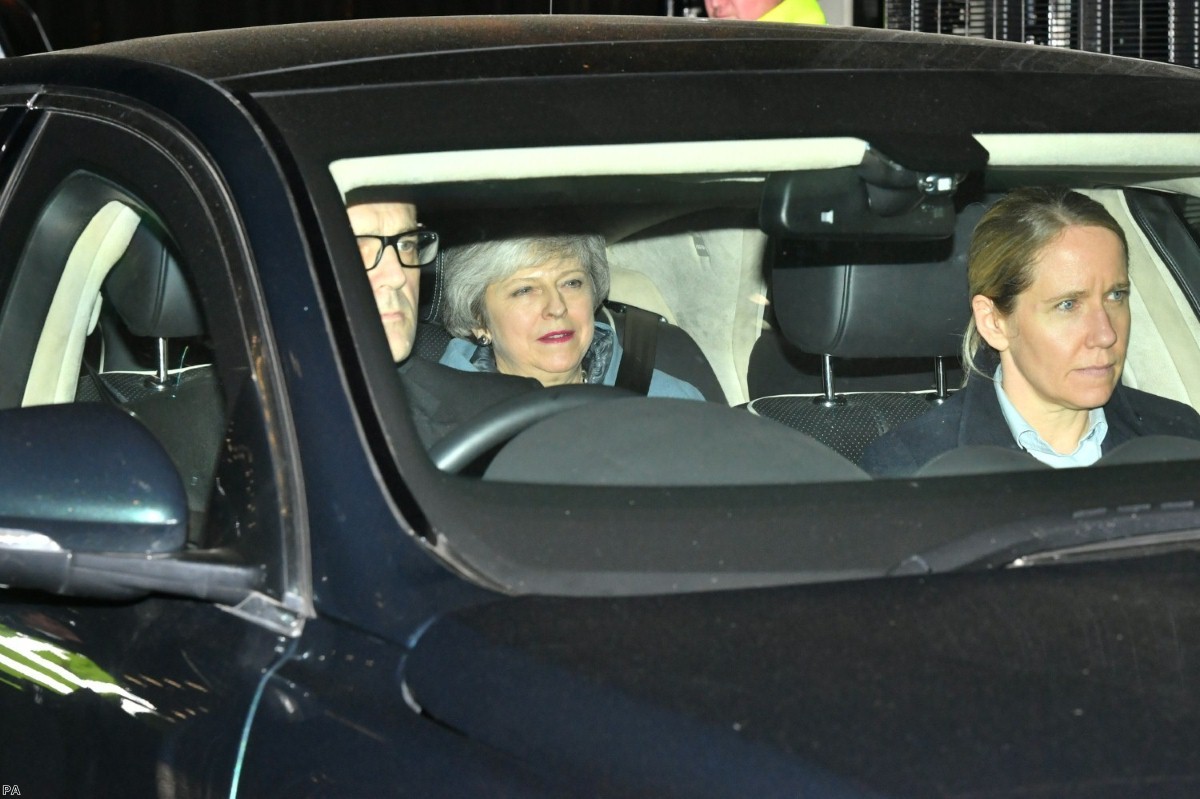 The government has been defeated by MPs on propositions that they themselves backed two weeks ago. The whole edifice of blather and nonsense is coming tumbling down.

It's commonly accepted that there's no majority in the Commons for any given response to Brexit. But today it went a step further. It was inadequacy squared. It is clear now that there is not even a majority for the imaginary things MPs had only recently given a majority to. The whole British political system is imploding in on itself.

It might seem like reasonless chaos, but there is a moral message to what is happening here. You cannot govern on the basis of gibberish. You cannot make gurgled yearnings the basis for your negotiating posture. Because the lack of meaning in those original propositions means that they do not work as functional foundations of policy.

This is what the farce looks like when it's untangled. May was defeated on her Brexit deal last month. It did not win the support of the opposition parties or her own MPs. They were concerned about the backstop, which would prevent a hard border on the island of Ireland.

There were then a series of amendments on what to do next. One of them was the Brady amendment. This substituted the backstop for "alternative arrangements", which it did not specify, on how to avoid a border. Even though this detonated her own deal, May whipped her MPs to support it.

The Brady amendment passed and the prime minister was able to claim, seemingly with a straight face, that she now had a mandate from the Commons to go to Brussels to negotiate some sort of magical solution to Ireland. She was unable to say what the solution was. She held meetings in which she tried to get people to accept ideas which she could not describe.

But MPs also voted on another series of other amendments that night. These would have provided a mechanism to stop no-deal, by extending Article 50. They rejected all of them, but then supported one by Caroline Spelman which ruled out no-deal in the abstract. So MPs were saying they backed the principle of something while rejecting any of the powers which would allow them to secure it. Nevertheless, even that modicum of reason appears to have now destroyed the government all over again.

It was a pitiful, ridiculous night, one in which parliament threw its weight behind fantasies without having the courage to support realities. But compared to this evening it looked like a towering moment of statecraft.

Today, the prime minister put forward a motion which said that the House "welcomes" her statement from earlier this week – one which said she was still trying to negotiate these fantastical "alternative arrangements" for Ireland. But then it also stated, and here was the kicker, that it "reiterates its support for the approach to leaving the EU expressed by this House on 29 January 2019" when it backed the Brady and Spelman amendments.

The Brexit jihadists in the ERG didn't like that, because it included the amendment ruling out no-deal. And the opposition parties didn't like it, because it included the Brady amendment on alternative arrangements. The House was divided against itself. It was in such a mangled and contorted state that it could not form sustainable majorities on anything. It literally could not even agree on the things that it supported two weeks ago. If it was a person you would have it sectioned.

The government has based its negotiating position on amendments which are on the one hand meaningless and on the other hand powerless, and now it is surprised when they do not form the basis for a stable platform of parliamentary support.

It was a shameful moment, one which was conducted without any honour or dignity whatsoever. Even for this government, which is quite plainly the worst of our lifetime, it was a despairing spectacle. The prime minister did not even attend the Commons for the result. She sat elsewhere, probably watching on a TV in an office somewhere, her political career departing her physical body.

"Is there some way you can encourage her to return to the despatch box and tell us what her plan actually is?" Labour leader Jeremy Corbyn asked John Bercow. The Speaker could not. Instead he peered at Brexit secretary Stephen Barclay and offered him the chance to respond.

The secretary of state sat unmoving in his seat. He is a man no-one had heard of, given arguably the most important ministerial appointment in post-war British history on the basis that he might not have the imagination to resign when he realised what it entailed. And now, when great moments come, he is unsurprisingly incapable of living up to them. He simply sat there. A government without a position, led by an absent prime minister, and a quivering, unmoving secretary of state.

"Or if the government chief whip wants to do so?" Bercow tried. No, he didn't want to get up either. The government was gone. It had vanished along, with its imaginary mandate.

There is really no government. It exists only on a formal level. As a functioning entity, it has ceased to exist. Its deal was demolished. Its negotiating mandate, which never had any content anyway, was rejected. It is a wisp of smoke, a lingering smell from somebody dreadful who already left the room.

Now, finally, MPs have to take back control. The fact that this even needs saying, that it did not happen weeks ago, should be a source of eternal shame to this parliament. But even if they did not have the spine then, they must discover it now.

This is where myth-making and fairytales get you: precisely nowhere. We need a concrete, meaningful plan to stave off disaster, with a firm and realistic timetable. That begins with a mechanism – not a principle, a mechanism – for extending Article 50. If they don't secure that soon, we're all going the way of the government.