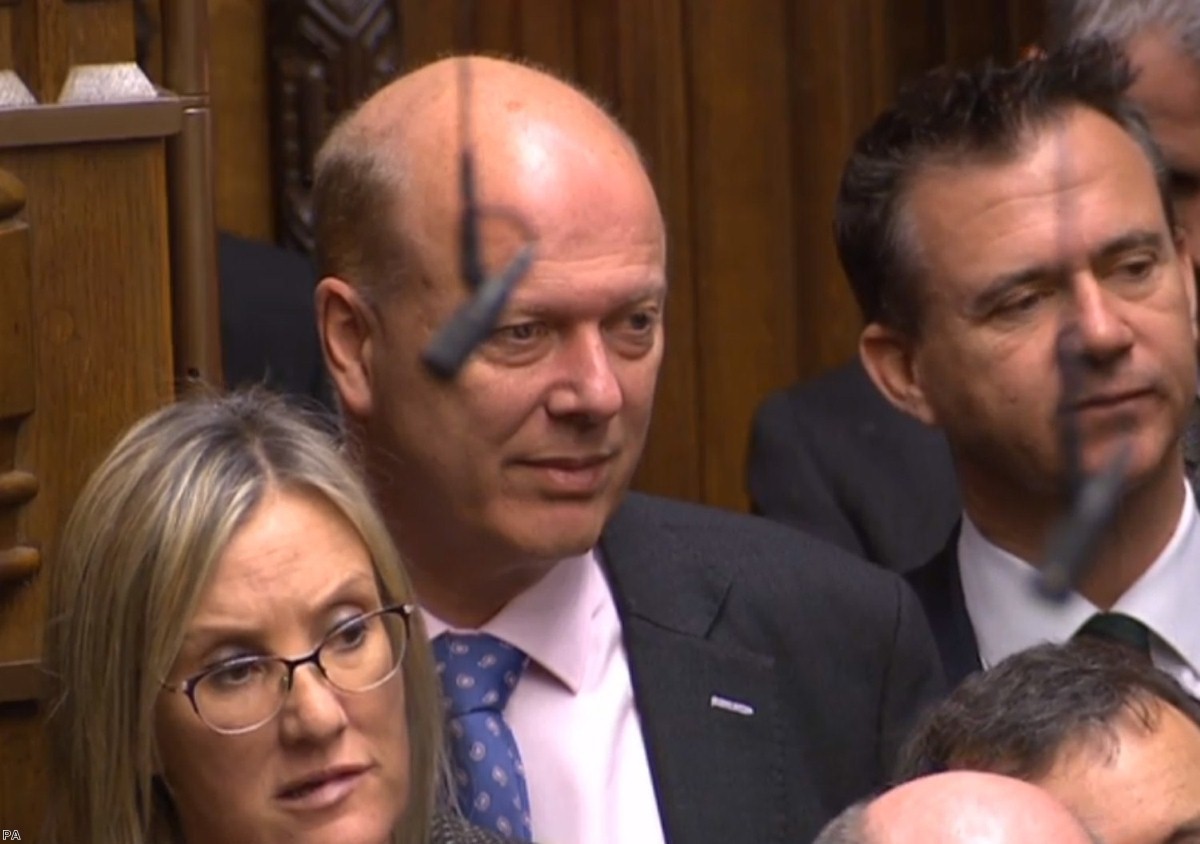 Week in Review: A quick reminder that Chris Grayling is the worst person in a terrible government

It can be hard to keep track, when the government is as bad as this, of the various failures of the individual members within it. After a while it all starts to congeal into the same grey mass. But no matter how bad things get, there is always one minister who stands out. His name is Chris Grayling. He serves as a litmus test of how far an incomparably mediocre man can succeed in a Conservative government.

This week, he tried to explain his lack of popularity.  "Some people want to have a go because I'm pro-Brexit," he told PoliticsHome. "A lot of people out there want to frustrate the democratic will of the British people who voted to leave the EU and because I'm a prominent Brexiteer in the Cabinet who backs the prime minister's deal I'm a lightning rod for the anti-Brexit brigade."

Normally the mind tries to avoid grappling with a quote from Grayling. It recoils in horror, starts to spasm up into itself. The thinking is so rote. The choice of words is so lazy. Even the structure of the sentences is turgid. They go on forever and yet never lead anywhere.

But it's worth taking a second to parse it down and note how relentlessly mechanical he is. Almost every sentence is a stereotype or a stock-phrase. He's "pro-Brexit". People want to "frustrate the democratic will of the British people". He "backs the prime minister's deal". It's an endless parade of reactionary mundanities, one after another. You can almost see the cogs slowly juddering in his echoey mind.

But seeing as he's mentioned it, it's worth taking a moment to recall the real reasons why people criticise him. It is because his record is one of unforced error after unforced error. He is the anti-Midas. Each department he touches crumbles into dust.

At the Ministry of Justice he instituted a hardline regime which saw a ban on books being sent to prisoners. The High Court eventually ruled it illegal. He angrily rejected efforts to improve condom access behind bars, despite warnings of the public health implications. He presided over a 5,000 decline in prison officer numbers between 2012 and 2015, which coincided with a rise in deaths and a broiling prison crisis which is still taking place today. The chief inspector of prisons, Nick Harding, accused him of interfering with his critical reports into the prison estate and threatening the independence of his office.

His reform of probation might, in a crowded field, be the most inept privatisation venture undertaken by the British government since Margaret Thatcher. No-one wanted it. Everyone warned it would be a catastrophe. He did it anyway. And it was.

Legal aid was stripped down for almost everyone. Judicial review, which allows individuals to challenge the decisions of government ministers in the courts, faced a sustained assault, only undermined by the incompetence with which he pursued it.

At the Department for Transport, he awarded a no-deal freight contract to a company which had never run a ferry service and did not own any ships. He set up a mock road blockage operation in Kent which went wrong because no-one turned up, costing the taxpayer £65,000. He literally couldn't even organise a traffic jam.

There are more failures, of course – countless more. Certainly far too many to list here. We laugh it off, but behind every self-imposed disaster there are real casualties: the prisoners reoffending because there was no interest in rehabilitating them, the victims of crime resulting from a probation system which cannot communicate between public and private silos, the people left without legal support in a baffling and under-resourced court system.

But there's something more deeply wrong than that. There's also the corrosive symbolism of the thing.

Grayling's continued presence at the top of British politics, under a series of Conservative leaders, proves that lack of talent, mediocrity and ignorance are no obstacle to success in modern Britain, and may in fact be an advantage. As Chris Allnutt wrote this week, it sends a message to young people and aspiring politicians that this system is geared up to select the very worst kind of person for high office.

We are now seeing the results of that failure. The political class is functionally inadequate. It has been presented with a clear-and-present danger to the British way of life and its response is to pass the buck, from government to parliament, from parliament back to government, and then from government to its own negotiating partner. This culminated yesterday in the appalling spectacle of Labour MPs on TV saying to the prime minister that they will vote for whatever Brexit deal she puts forward if she will "show us the money" for their local patch.

Grayling is at the top of that system of failure. He is that little bit more intellectually, presentationally and ideologically useless than all the others and therefore deserves special mention. But he is merely the totem of a culture that has singularly failed the country.