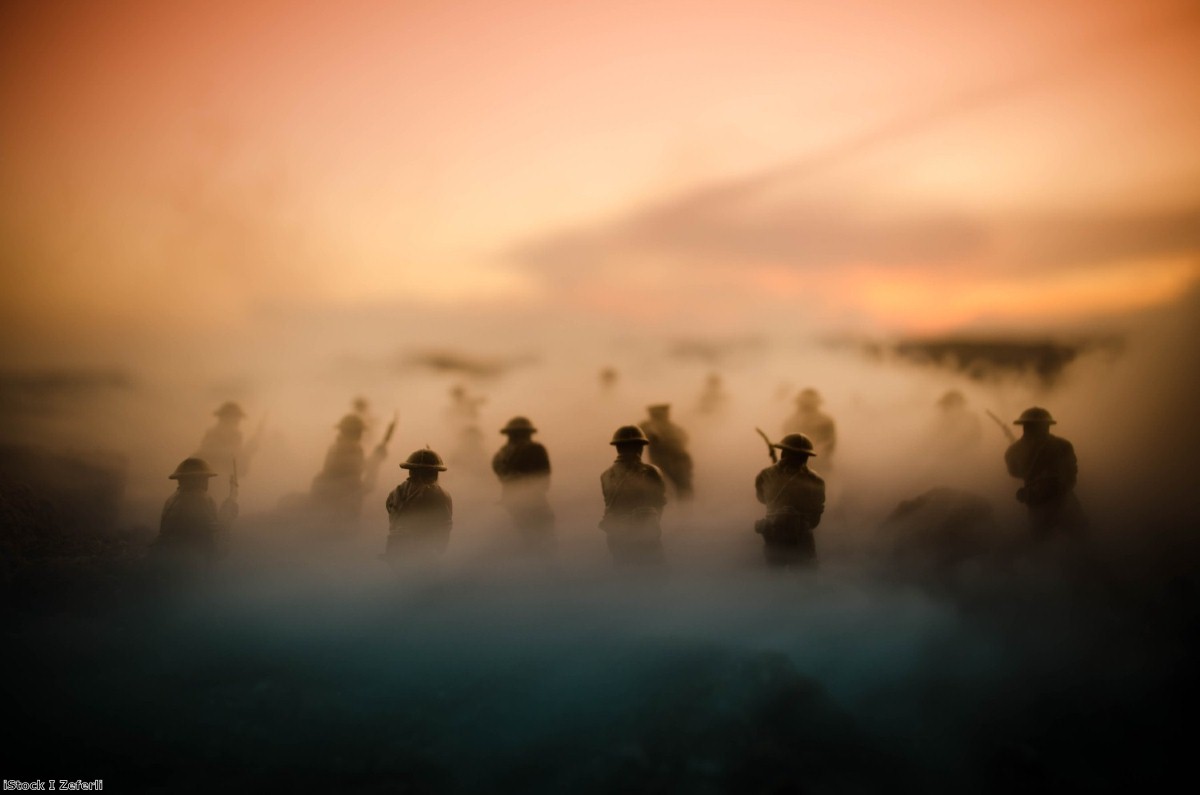 The final parliamentary Brexit battle is coming: This is what it looks like

This morning we finally got a clear look at the battlefield. MPs have marched for two and a half years, climbed the hill of defeating Theresa May's deal, and finally they can see it there in front of them.

The amendments that have been put down on the prime minister's Brexit statement reveal how MPs are going to try and wrestle control from the government. They have two aims. The first is to prevent no-deal. The second is to provide a forum, outside of No.10's interference, in which they can figure out what the hell to do next.

Before the armies could make their way down to the battlefield, however, the government was up to a bit of slippery business. It's a weird move that makes no sense to anyone. May made no mention of it in the Commons yesterday – not in her statement or during hours of questioning from MPs. But then, later on, the written statement was published. And that had a caveat in it.

"Members will be advised," it said, "that amendments tabled to the original section 13(6) motion will need to be re-tabled when the second joint motion is tabled."

That's odd. There shouldn't be a second motion. There should just be the motion May put forward. Why on earth would she put it down again? Apparently it is necessary "to avoid any legal uncertainty as to whether the government has complied fully with the terms of the European Union Withdrawal Act."

But that makes no sense. The government has complied with the Act. The pertinent bit is Section 13. It states what should happen once the prime minister got a deal, or if she didn't. Parts 1 and 2 of Section 13 said that the deal with the EU would only be ratified if the Commons voted for it. Parts 3 to 6 concerned what happened if the Commons voted down a deal. And parts 7 onwards laid out the rules if the prime minister failed to get a deal at all.

The bits which are relevant to us are therefore 3 to 6. But last night's written statement referred to part 7 onwards. "Section 13(11) of the Act states that the government must make the statement and motion mentioned above if, at the end of 21 January 2019, 'there is no agreement in principle in negotiations'," it said. "While the negotiations have yielded an agreement, that agreement has not been approved by parliament."

This is really odd. It takes the bit of law meant for not getting a deal with the EU and applies it to a circumstance in which the government could not get it past the Commons. It gets even more weird when you consider that the prime minister did not mention it.

So what's going on? No-one knows. It's possible that this is just a bit of extreme legal caution and that the government is trying to insulate itself from a legal challenge in the future. But it's hard to see how that holds. The government does have a deal with the EU. The only way this is relevant is if it didn't.

There is another interpretation. Putting down the motion again means all the amendments are withdrawn and MPs have to put them down once more. The government could be hoping that they don't notice this has happened. If so, this is a very desperate gambit. MPs will notice and if anything it is likely to strengthen their resolve.

Or perhaps it is useful for the government to pretend that they have not really reached a deal with the EU so it's easier to tinker with later, or because a legal challenge might hinge on whether it was officially secured at this stage.

Legal and parliamentary experts are baffled by this move and some of them smell a rat. There's clearly some sort of plan bubbling under that nonsensical legal logic and people are vigilant about what it might be.

When the motion is finally brought back a second time, MPs will put down their amendments all over again. The two most pertinent ones are from Labour MP Yvette Cooper and Tory MP Dominic Grieve. They are complementary and seem to have been designed from the ground-up to work alongside each other. This is extremely positive. It suggests that soft Brexit supporters and People's Vote supporters in parliament are now working actively together.

Cooper's amendment is the one that tries to kill no-deal. It does this in quite a convoluted way.

First of all, it creates a private members bill. These are pieces of legislation written by MPs. Usually they die a lonely death. No-one knows they existed and no-one cares, apart from the author and their immediate family. But this one is different. People know it exists and they definitely care.

The Cooper bill gives the government until February 26th to secure a deal. If it fails, it automatically triggers a direction to the prime minister that she must apply for an extension to Article 50 until December 31st. Basically, it turns the no-deal cliff-edge into a nine month Article 50 extension.

Cooper didn't have to go this way. She could have just put an amendment down demanding Article 50 be extended. But amendments on motions are not legal. They are political. And there is room there, if the government was being especially untrustworthy, to ignore it. This government is especially untrustworthy, so Cooper has chosen to go down the harder, firmer route of legislation. That really gives MPs full legal control.

But there is a downside: it is much slower.

It does this by targeting various standing orders – rules for the way the House operates – and assassinating them.

So standing order 14(1), which gives government business precedence, is killed off for the day. Standing order 41A, which can put off a vote until another day, is also butchered. Any mechanism which would allow Brexiters to filibuster the bill has its throat cut in a back alley. Then it allows amendments ahead of second reading, which would massively speed things up.

It's like if a piece of backbench legislation was zapped by lightning and given super powers. It does to the bill what happens to Neo at the end of the Matrix. All his opponents start to move in slow motion and he is imbued with extraordinary abilities.

But he's still not God. Neo had two more films of increasingly convoluted and self-important existential philosophy to get through. And Cooper's bill would face similar problems.

After second reading, it would still have to go through committee and report phase and then third reading. That's not just in the Commons. It involves the Lords too. Her plan is clearly to try and clear as much of this as possible on February 5th, but if the government was really keen on no-deal and intent on killing this thing dead, they might still be able to delay it until it was useless.

That would be constitutionally shocking. The bill would clearly have the support of the House, not just on its own second reading but by the extraordinary step of having accepted this superhero formula amendment to create it. But we are in constitutionally shocking times and nothing can be ruled out. Cooper's amendment is a valiant and highly credible effort to prevent no-deal. But a government really committed to blocking it could probably find a way to do so.

There's one other problem with the bill: MPs cannot put down and pass legislation with financial demands. Only the government can do that. This is a basic principle which has been around pretty much as long as parliament has existed. The provision for it nowadays is in standing orders 48 and 49.

The problem is that Cooper's bill does have a financial element. It doesn't mention it specifically, but it's in there. If you extend Article 50, you have to go back to the Withdrawal Act of last year and scrub out the bit that said we're leaving on March 29th. And that means that the bit repealing the European Communities Act 1972 has to go too. And that has a money element, because it states our financial obligations to the EU.

For some people, that's a clincher. It kills the legislation stone dead. Policy Exchange's Stephen Laws got very excited yesterday and imagined that it would lead the Queen to pull Excalibur from the stone and kill an imaginary Remainer conspiracy.

But it's not as simple as that. Cooper's amendment has three defensive options. The first is that governments are expected to put forward a money resolution for private members bills that survive to second reading. The second is that the financial element is an after-effect of the bill, not the primary function. And the third is Speaker John Bercow, who seems quite willing to take unprecedented action right now if it gives parliament a greater say. The constitutional shocks play both ways.

And then there's Grieve's amendment. With no-deal killed off by Cooper's effort, this then takes up the rest of the fight and tries to provide a space for the Commons to decide what it's going to do next.

It is a very neutral effort. Earlier drafts were more radical. It provides for six days in which MPs call the shots: February 12th and 26th, and March 5th, 12th, 19th and 26th. That final day is proper squeaky-bum territory. If it gets that close to the end of the wire, we're in serious trouble.

Like Cooper's amendment, it kills off standing orders 14(1) and 41A, on the government's ability to control Commons business and mechanisms to delay a vote. Then it ensures that debate is on Brexit, by kicking things off with a motion that "this House has considered the United Kingdom's departure from, and future relationship with, the European Union". And it blocks any attempt at filibustering. At the end of the debate, there's a vote.

What MPs chose to do with this time is up to them. If they want to spend those days forming a piece of legislation on a People's Vote, they could do so. If they want to hold a series of indicative votes on a customs union, or soft Brexit, or a second referendum, they could do that too. What they choose is their business. All Grieve's amendment does is keep the government out the way. It provides a forum, not a solution. That's up to MPs.

That's the shape of the battlefield in front of us. What happens next is anyone's guess.

This piece is based on conversations with Maddy Thimont Jack from the Institute for Government, Jack Simson Caird from the Bingham Centre for the Rule of Law, Brigid Fowler from the Hansard Society, and others in Westminster who chose not to be named.