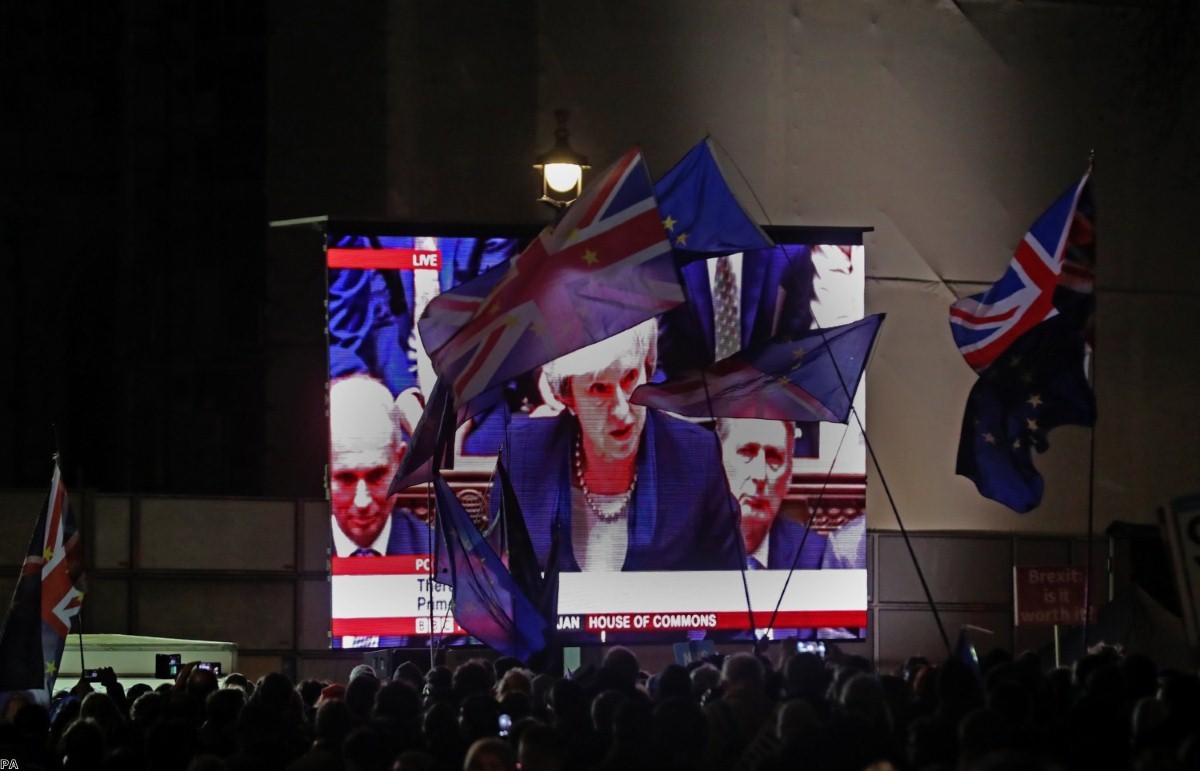 Historic defeat: May faces her day of judgement

It was crushing. Never in our lifetime has a prime minister been humiliated like this. After the vote was over, the parliamentary nerds started trying to find another moment in British political history when the government had been defeated so comprehensively. It's possible they haven't been.

The MPs were crowded in the No lobby like sardines. Usual political enemies like Tim Farron and Iain Duncan Smith joked away, their animosity temporarily put to one side as they united to kill Theresa May's deal. More cautious commentators had been hedging their bets, suggesting many would abstain, but it wasn't to be. They delivered a body blow. The final result was 202 votes for and 432 against. A majority of 230. A biblical level of defeat. The kind of defeat that puts you in the history books.

By any rights, that should have been it. No British prime minister before her would have stayed in place after that. But instead of resigning, May quickly darted for her sole remaining advantage: the DUP's continued loyalty to the concept that Jeremy Corbyn must be kept out of power at all costs. She encouraged the leader of the opposition to table a vote of no-confidence in the government. This would allow her to take the challenge to her position in a way she could survive.

Corbyn took the bait. He had to. Anything else would have looked like rank cowardice. The vote takes place tomorrow. Probably, Corbyn will fail. And then, technically, he is in the next stage of the sequence he'd been forced to accept by members at the Labour conference. Renegotiations won't happen. A general election won't happen if he loses that vote. And then there's the 'all other options' stage.

Each step drives him remorselessly towards having to support a People's Vote. But he is going to fight it every step of the way. He is going to do everything in his power to prevent it. He will table confidence motion after confidence motion if he has to. Corbyn is desperate not to be the person to call that vote.

Then May, with the closest approximation of a humble tone she could muster, tried to present herself once again as a reasonable centrist. She was better at it this time. She insisted that she would not try to work down the clock. She sounded very much like she would never tolerate no-deal. On the other hand, Brexit had to go ahead. She would also continue to oppose a second referendum.

It's a weird state of affairs. No-deal and People's Vote are the two obvious options which hang over everything, but neither the prime minister nor the leader of the opposition are prepared to countenance either of them.

Instead, May said she wanted to see if there was any view which could win a majority in the Commons. She was giving herself over to parliament. There'd be a statement on Monday – if indeed the government still existed on Monday – along with an amendable motion. But outside of no-deal and People's Vote, what options are there really available to her?

There are only two things that can be changed in order to get a deal: the withdrawal agreement and the future relationship document.

The only thing you can do to the former is to remove the backstop. This, and only this, would placate the hardcore Brexiters. But it would not bring Labour on board and more than enough Remain Tories would vote with the opposition to defeat it. It doesn't matter though. It's irrelevant. The EU will never take the backstop out.

Changing the future relationship document is much more tempting. It can be done easily on the EU side. And technically it could bring Labour on board. If she was to amend the wording so that it promised a permanent customs union and strong promises on workers and environmental rights it would almost directly replicate Labour's position. Could this bring the opposition on board?

On a moral and logical level the answer is surely yes. But on a political level, the answer is absolutely not. Labour does not want to touch Brexit. It wants the process to take place in such a way that it can blame everything on the government and keep its fragile coalition of mostly Remain voters and some Leave voters onside. Helping May pass a deal is suicide.

This means that no specific deal, no matter the content, is possible. So we come back to the same problem. The two options she and Corbyn have rejected are the only ones which are possible: no-deal and a People's Vote.

That brings parliament into play. If the leaders won't pick one of the two possible options, then MPs will have to mass behind one and force their hand. At the moment there is no majority for no-deal or a People's Vote. Many MPs have ruled out both. But soon they are going to have to decide which of the two they find least objectionable.

No-deal comes closer and closer. In the time remaining, May has promised amendable votes, MPs have shown every willingness to force her to hold them, and Bercow today reiterated that MPs will be able to debate and vote on whatever they want. So, as the weeks pass, these options will be thrown forward as alternatives, as brake pads to prevent calamity. And eventually those options are likely to whittle down until only a People's Vote is left.

The question is whether enough MPs have the bravery and responsibility to prevent no-deal. We're about to find out.