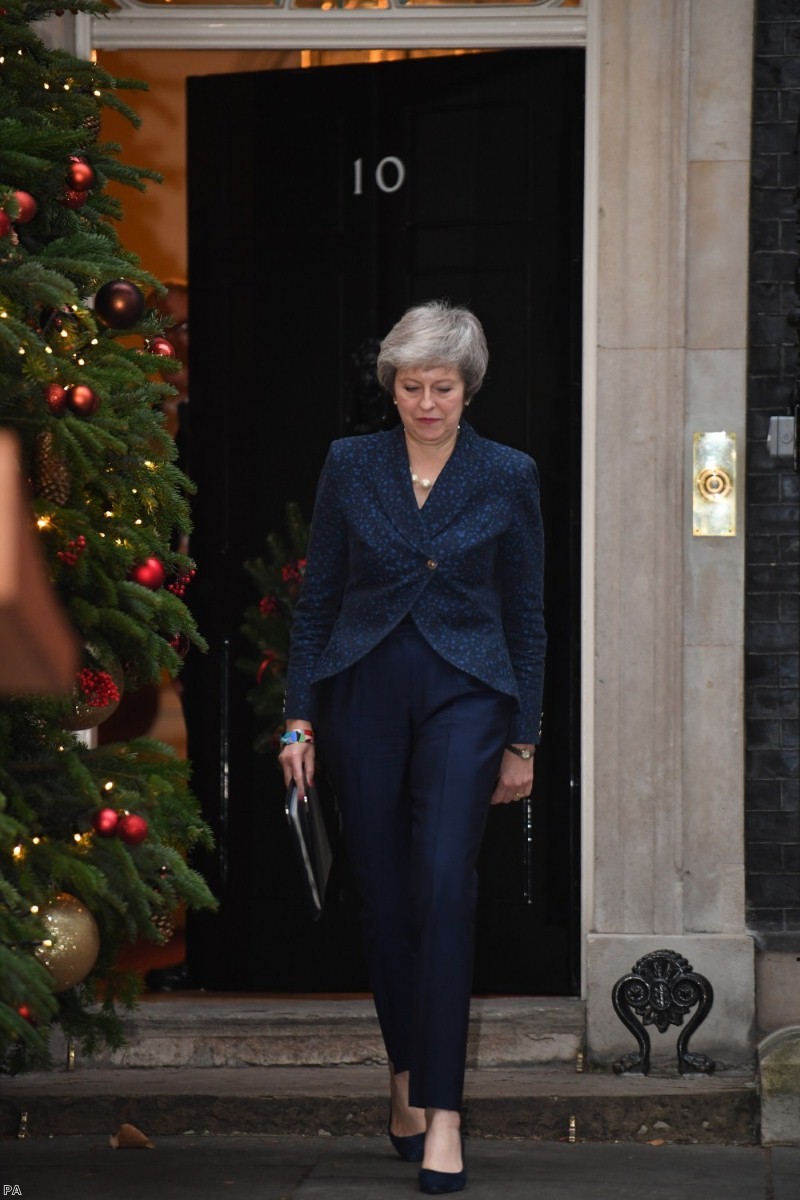 May leadership battle: We’re the hostages of a Tory party that has gone insane

There really is no condemnation strong enough for the behaviour the Conservative party is exhibiting. If there is any justice in the world, it will be a stain on their reputation for a generation.

Brexit has simply driven them insane. They have pursued something which was always impossible and then objected to any evidence of its impossibility. They have been outraged by commitments to maintain the promises they themselves made. They have attacked each other in the most sustained bout of internecine squabbling we've seen in government in our lifetime. And now they are trying to undermine their own leader so they can replace a terrible deal with an imaginary one. And all with just weeks of Article 50 left to run.

So. What the hell happens now?

All options are a disaster. It is a shopping expedition in hell.

If May wins the vote strongly tonight she will carry on with her so-called plan. That, as far as we can make it out, is to secure new concessions on the backstop without actually reopening the negotiations which would provide them. In reality, it is probably some new form of wording in the future relationship document making it clear no-one wants the backstop to be permanent.

If May wins modestly, it'll be up to her judgement whether she stays on as PM. Margaret Thatcher went in similar circumstances, but May shows none of the traditional signs of decency or honour in her political conduct. So now the same pattern plays out – fake concession, lost vote – only with her having precisely zero authority within her own party or the country.

There would be one change, however: She would be impossible to remove. The leadership contest rules would give her a one year immunity from challenge. A lame duck, encased in steel.

If she's replaced, there has to be a leadership challenge. There are no set time constraints – there are in fact precious few details about how it operates – but a set of Tory MPs will run, they will be whittled down to two by their parliamentary colleagues, and then those final contenders will go out to the membership. The clear intention is to do this as speedily as possible, but there is Christmas in the way, when people will go home. That's a lost week, at least.

The temptation will be to stop it having to go out to the membership, which is the most time-consuming part. But after denying their members a vote last time, can they really do that again here? Can a party changing their leader, while governing without a majority, really deny even the tiny modicum of democratic legitimacy which a membership ballot brings?

If they do cut off the membership vote aspect, it might all conceivably be wrapped up by mid-January. If not, it's more likely to be February. The Article 50 deadline, in case you need reminding, is March 29th.

So who will win? If the competition can be kept to the parliamentary party, there is a chance for a marginally more moderate figure to succeed. No-one truly moderate, of course, but maybe an Amber Rudd, or Sajid Javid, or Michael Gove perhaps. People more likely to eye-up an EEA-type agreement.

But even at the parliamentary selection level that is unlikely. Many Tory MPs believe the successor has to be a 'proper' Brexiter. They have bought the lie that anyone who voted Remain would not bring enough magical unicorn spirit to the endeavour. Nothing May did, including handing them the Foreign Office, the Brexit department and the International Trade department, could convince them otherwise.

MPs are still most likely to go for a hard Brexiter. If it goes to the membership, who are politically quite extreme and have been infiltrated by non-Tory Brexit campaigners, it'll be the most visceral Brexiter available.

No matter who the replacement is, they're not going to keep May's deal. That is suicide. The leadership vote doubles up as a Tory referendum on it. If she goes, it goes.

A moderate Tory replacement would refuse to leave without a deal, so they'd be forced to keep the backstop. Their only option would be to double down on the embrace with the EU. They could probably do this relatively easily by changing the future relationship document to include full permanent customs union membership and a very warm formulation of words on the single market. There would then be a section which said that as long as that was honoured, the backstop would never come into effect.

They could then approach Labour to back the deal, as it would fit their demands almost identically.

But perhaps Labour would still vote against it. After all, their demands are vague and their only real desire is for the Tories to collapse. A daring Tory leader could try to pre-empt this by inviting Labour to sit with them in Brussels as they hammer it out, so it is calibrated to a joint Tory-Labour specification. A leader who is making a fresh start and intent on getting that deal through the Commons might just have the confidence to do that.

But this is unlikely. Chances are the winner will be a hard Brexiter. They will say they need to get rid of the backstop and therefore the deal. So it is no-deal Brexit.

They will present this as 'managed no-deal', but we should call it 'deal-no-deal' so it sounds as absurd in wording as it is in reality.

The EU probably does have a back-up proposition on this, which would cover citizens' rights and administrative non-trade elements like aviation treaties. But that will not stem the chaos. It will not isolate the problem. Traffic modelling studies found that a two minute increase in checks at Dover-Calais would create 20-mile tailbacks within 24 hours on the UK side. That will balloon out over the first week. Food will not get in. Medicine will not get in. It will be a catastrophe.

It is absurd that this still needs saying, but the no-deal threat, whether it is managed or otherwise, is not some witch-like construction invented by cosmopolitans. It is real. It is an actual thing that will actually happen in this actual objective reality. It cannot be wished away by installing a leader who believes harder than anyone else that it won't. And there is no time to prepare for it, no matter what the zealots say, because that would necessitate road building, staff hiring and building leasing on a scale that requires several years to organise and implement.

Whichever of these scenarios happens – soft Brexit or deal-no-deal – there will need to be an extension of Article 50. This requires the universal consent of the remaining EU member states.

Our previous understanding was that this was limited to May 2019, because that is when the European elections are held and it wasn't thought possible to have Britain participate in them. Certainly it's true that there is no appetite for that, but rumours are growing in Brussels and London that there may be a way around that problem.

Perhaps Britain could just participate and elect MEPs, even if it is for just a few months? Perhaps British elections could be postponed to a later date and existing MEPs kept in place until then? Perhaps MPs could go over and sit for them? What was once a hard-and-fast blockage is now looking more permeable.

But that is a small glimmer of light in a field of darkness. Just look at these grotesque scenarios. A weak prime minister unable to get her deal through but immune from being overthrown. A lunatic replacement driving through the most extreme policy of economic self-harm this country has ever seen. A time-wasting leadership battle in the midst of a problem defined by lack of time.

MPs have to stop this. The vote on January 21st still holds and it can still be amended. They have to take control of the situation.

As for the Tory party, its conduct is simply unforgivable. Whatever governance is, this is the opposite.