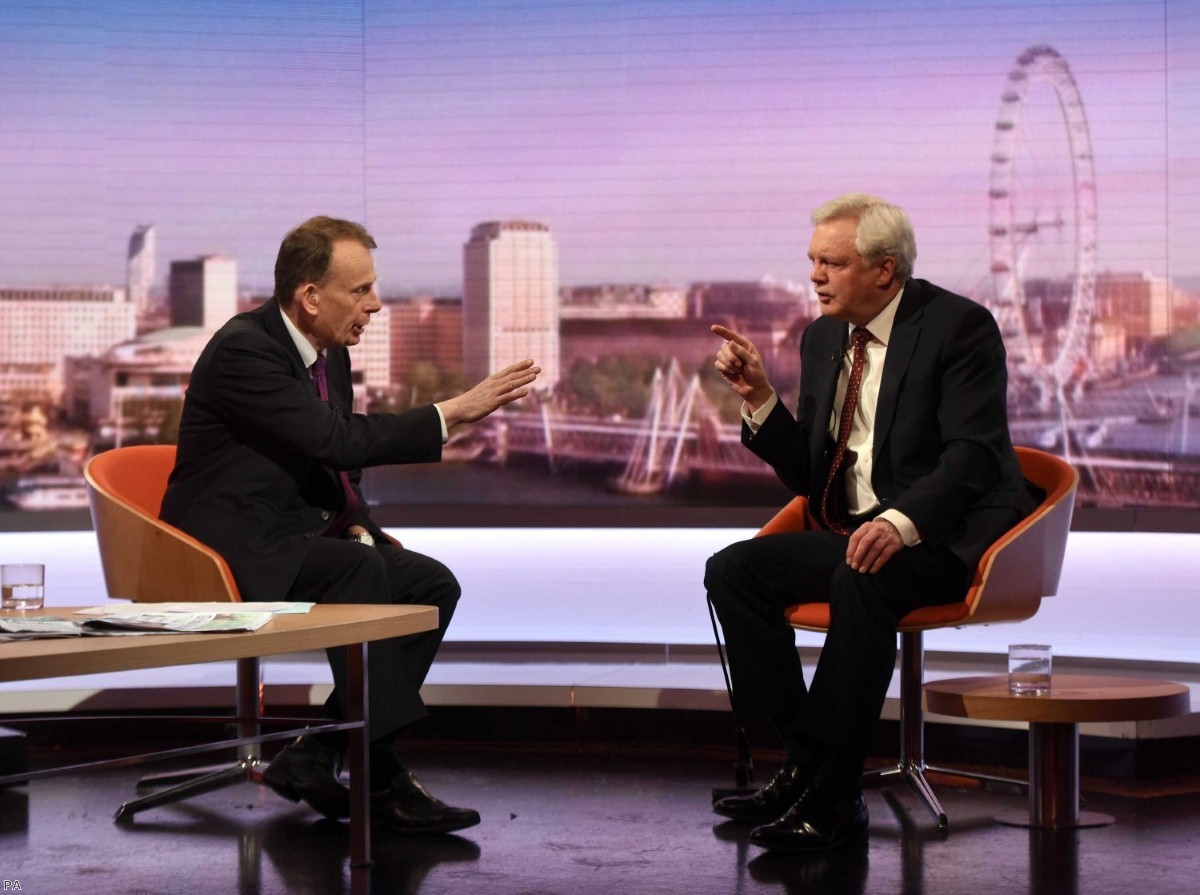 The real Brexit battle: Never trust someone who says ‘referenda’

There are a great many things in the world that David Davis is wrong about, including Brexit, the Chequers plan and his own capabilities. But the most irritating might be his use of 'referenda' instead of 'referendums', which he employed on Sunday while on the Andrew Marr programme.

"The point about referenda is that they are once in a generation" – Former #Brexit Secretary David Davis on prospect of a second EU referendum #Marr https://t.co/C8fIXaxCKY pic.twitter.com/tFt3drljY2

The use of 'referenda' is a human early warning sign – like being rude to waiters, not liking dogs or using 'whilst' in writing. It means you should be wary. The person you are dealing with is not to be trusted.

It is not just that 'referenda' is wrong, although it is wrong. It is that it is pompous – and not only that, but pompous about the precise thing it is wrong about.

'Referendum' comes from the Latin word 'refero', meaning 'to carry back'. It's a noun which originated as a verb. But the word does not function according to Latin usage because it a fresh, newly-minted English term – and a fairly recent one at that. Until the 19th Century, people mostly used 'plebiscite'. Using 'referenda' for the plural is therefore inappropriate. The basic English plural of just chucking an –s on there works fine.

Even if this wasn't true, the –a structure for pluralising the word in Latin makes no sense on its own terms. There is no plural for it any more than there is a plural of 'referring' or 'running'. If you were next to someone in a stadium watching the Olympics, you wouldn't say the 'runnings' were very good.

As the very sensible Tom Chivers pointed out earlier today, it is right in that it is regularly used.

*sigh* it is with a heavy heart that I have to inform you that "referenda" and "referendums" are in roughly equal use and are therefore both "correct"; https://t.co/QnAINIlThO

(it's fine to have a preference! But it's an aesthetic preference, not a matter of right and wrong.) pic.twitter.com/KY4OEjqpFk

He's correct. This is one of the most beautiful aspects of the English language and indeed of the open culture that surrounds it: usage creates validity. Rules and definitions exist, but where enough people start using English in a certain way, they bend in order to suit them. People are the masters of English, not textbooks. So for instance, the Oxford English dictionary recently confirmed that 'literally' could be used for emphasis rather than to just insist on the literal truth of something.

The OED has followed this standard with referendums too. In 1989 it found that "as a Latin gerund referendum has no plural" and that referendums should prevail. But in 2009, it observed pragmatically that usage was "fairly evenly divided".

However, there is a further test to apply to the word: being a dick. The best guide to this style of rule-making was George Orwell, whose essay Politics and the English language, while a bit silly in places, remains the best single piece of writing on writing. It's available for free online here and is no more time-consuming than a standard long-read.

Of his many rules, Orwell insists that writers avoid "pretentious diction", which is used to "make biases look impartial and scientific". They should also stay away from foreign phrases where an everyday English equivalent will do and try not to use a long word where a shorter one will do (referenda is admittedly shorter than referendums, but it is more complex, academic and affected).

"Bad writers," Orwell concludes, "and especially scientific, political, and sociological writers, are nearly always haunted by the notion that Latin or Greek words are grander than Saxon ones".

Recent examples have demonstrated the wisdom of Orwell's argument. In 1998, Tory MP and reactionary Alan Clark branded 'referendums' an "exceedingly ugly term" and suggested the Speaker should promote the "Latin word" and discourage "continued anglicisation". It is a perfect example of how stupid people are when they spend their lives congratulating themselves for being clever. Not only does the "Latin word" not exist, but his plural of it would make no sense if it did.

Speaker Betty Boothroyd had clearly read her Orwell. "I think the plural is a matter of taste," she replied, "but I've always preferred the use of the English language to any Latin form if that is of some guidance."

Orwell's preference for short English words over technical or foreign words, or jargon, is not some small-minded, Little-Englander counter-snobbery. It is an attempt to imbue language, and political writing in particular, with the ability to scrutinise the powerful. By working the words, by forcing them to be clear and specific, it prevents writers from misleading the public.

It also blocks polemists – whether they are politicians or comment writers or think tank directors – from sneaking extremist proposals in under words which are almost completely disassociated from what they entail. Finally, it makes politics more democratic, by expanding the terms of who can read it. The posher political language gets, the more normal people are alienated from it.

'Referenda' fails badly on these terms: It adopts a more complex, pompous usage to do something which can be readily achieved by sticking with the standard English plural. And it does so in a way which is wrong even on the preening basis upon which it is attempted.

It's like watching a man trying to impress his friends with his expensive restaurant choice, only to start trying to cut the food with his plate. Never trust anyone who uses it.