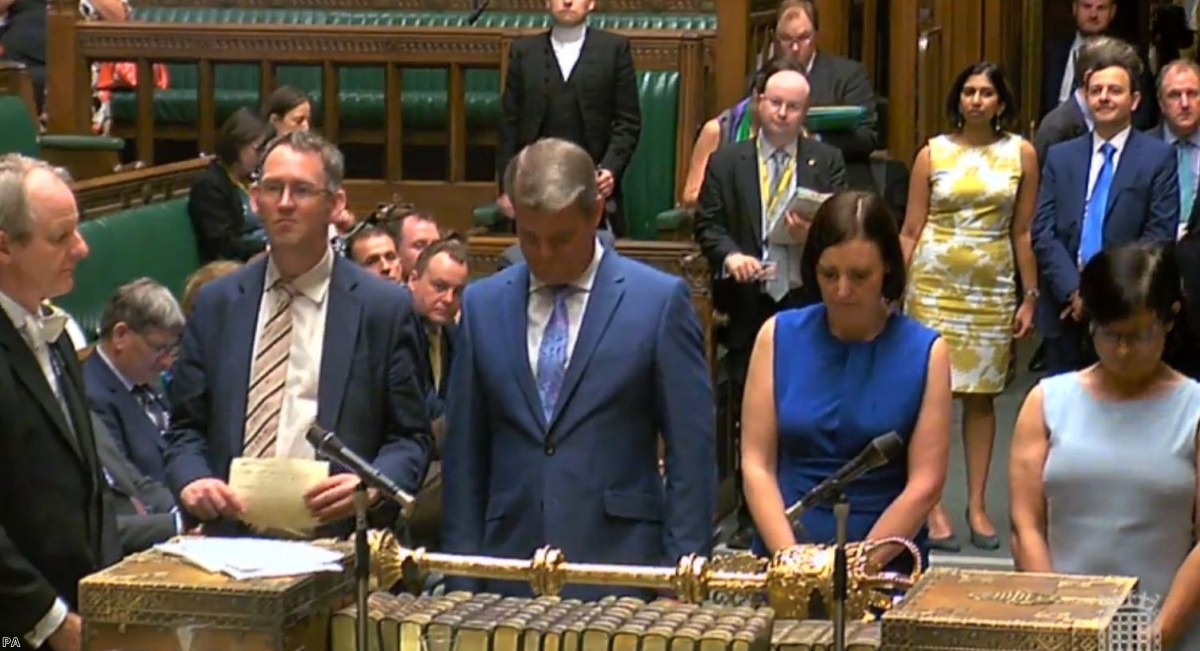 "It's obvious," Ken Clarke told the Speaker today, at the start of the debate on the trade bill.

"The moment we have an important bill, the government is anxious the House of Commons should have no opportunity to talk about it, limited opportunity to vote about it and it should be got out the way as quickly as possible. We should be challenging this scandalous abuse of the House."

Clarke's comments had a specific origin. The hours beforehand had seen another attempt by parliament to limit any involvement from MPs in the Brexit process.

Yesterday, the taxation (cross-border trade) bill – confusingly referred to as the customs bill – returned to the Commons, but not before a pointless statement by Liam Fox was inserted beforehand to run down the clock.  Today, it's the turn of the trade bill. Taken together, these bills allow the government to extract itself from the EU's trade policy umbrella and conduct its own trade deals.

Neither has been given anything even approaching a respectable period of time in the Commons. They've been rushed through, amid attempts by the prime minister to bring forward summer recess and limit the number of days parliament is sitting still further.

John Bercow replied to Clarke that he could not control the timetable – that was up to the government. But his sympathies were unmistakable. "The Speaker will do everything possible to facilitate votes that members wish to have," he said. And then added pointedly: "No attempt to avoid that is going to work and I think people need to be clear about that."

He had good reason to be suspicious. As the two men talked, government whips were trying to group a rebel amendment by Nicky Morgan into a last batch so that time would run out before it was called. The endless series of dirty tricks designed to stop MPs having a say on Brexit continues to provide new tips and techniques. When they're done, the whips should write a Christmas book, listing them all one by one.

The same goal is being pursued in the Lords. Peers are blocked from scrutinising things called 'money bills'. These are pieces of legislation solely concerning taxation or government spending. That block provides a tempting opportunity for the government. After all, peers have been far more troublesome than MPs. Ministers would like little more than to exclude them from the Brexit process altogether. So they have argued that the customs bill is a 'money' bill and that the Lords should, therefore, be kept out of it.

There's a problem with the government argument though. Clause 51 of the bill contains some rather extensive powers which go much further than mere taxation. It basically allows ministers to make any change to VAT, customs duty or excise duty they like. It does this using something called statutory instruments, otherwise known as Henry VIII clauses, which grant the government executive powers to change law without parliamentary interference.

There is no time limit on how long these powers can be used for, so some future minister in a future government could deploy it for all sorts of things we cannot currently imagine. The only limitations are that it can only cover these three areas.

The powers can even be used on the Act itself, like some kind of circular, post-modernist mallet. This means you could use a statutory instrument to alter the rules on the use of the statutory instrument. This sounds insane but actually it makes perfect sense. It is exactly the kind of mechanism you'd put in a bill if you wanted to be able to delete its safeguards at a later date.

In the government's defence, it is not unheard of for statutory instruments to be used in money bills. And some of these powers will surely be needed for the kind of hasty technical action Brexit may well entail. But too few safeguards have been proposed for their use. Indeed, the entire approach of the government has been to try to avoid any scrutiny of its powers at all. That bodes badly for their responsible use of the powers they are giving themselves here.

Behind the scenes there has been quite the battle over this. Clerks agreed with the government that it was a money bill. But that decision was not theirs to make. It was the Speaker's.

Senior legal advisers were brought in. They argued that Clause 51 meant it was not a money bill. The clerks continued to kick back against this advice. One of them even threatened to resign over it. But gradually Bercow was being convinced by the lawyers.

Then the ERG hardliners came in with their amendments on customs collection reciprocity and a customs border in the Irish Sea. They won those battles, but victory had a delicious irony in it. These amendments clearly went beyond anything in a money bill. They made it almost impossible to argue for the government's category. Bercow is now heavily expected to allow it to go the Lords. There, peers are likely to give it a good going over and return it to the Commons with a series of amendments.

That's not the only fight going on. At the moment, Liam Fox is supposedly negotiating future trade deals. If he is doing even the bare minimum his job entails, he will be talking to the countries which have existing trading arrangements with the EU – ones we previously enjoyed the benefits of as a member state. The UK urgently needs these to be rolled over.

But there's a problem. Countries like South Korea, Chile and South Africa are unlikely to just continue our trading arrangements on current terms, given they are now being offered a more limited degree of access to the single market. And there's one other thing: Britain is at a disadvantage. It is facing a severe time limit on negotiation, at the end of which it will fall out of the trade agreement by default, amid general political and economic chaos. So they are not only being presented with a worse deal than before, they have the leverage to secure a better one.

It is a disastrous combination and one which would challenge even a highly competent minister. Fox is not that minister. So we urgently need to know what he is doing and what kinds of promises he may be offering trading partners. However, under existing law, MPs have no right to see his negotiating text until it is completed. They are frozen out.

Even when a deal is done, MPs' powers to resist it are very limited and Fox is doing everything he can to keep it that way.

We used to have an extra layer of scrutiny when it came to trade deals. They were called MEPs. When the EU was ready to sign a trade deal, MEPs would hold it to account.

Increasingly, member states had become so belligerent that the Commission was even starting to seek their individual consent to trade deals. The Ceta deal with Canada, for instance, was almost torpedoed when the Belgian regional parliament in Wallonia decided against it.

That kind of democratic accountability seems like a distant memory now. Outside the EU, we've only MPs to scrutinise trade deals. And they are very limited in their powers.

The existing rules come from a 2010 piece of legislation called the Constitutional Reform and Governance Act. It took an old 1920s convention called the Ponsonby Rule and put it on firm statutory footing.

The trouble is that the Ponsonby Rule doesn't add up to much. It just states that a government wanting to sign a treaty must bring it before parliament, lay it down, and give MPs and peers 21 days to object to it. There is no legal obligation to hold a parliamentary debate. It just sits there and is passed if no-one complains.

Even if people do complain, it doesn't achieve very much.

There is no end-point on this weird constitutional curio. If the Commons is disciplined enough about it, it can keep delaying that treaty forever. But it can never veto it.

All said, this is a pretty weak parliamentary power. If the government can keep proposing something over and over again, with whips constantly trying to buy off rebels as we have seen in recent months, it's likely to win eventually. But that is all that is on offer. That is the full extent of parliamentary control over Fox's trade agenda.

At every level – from day-to-day politics, to the use of official parliamentary categories, to the small print of the bill – the government is seeking to maximise its own power and limit that of MPs and peers. If it's parliamentary sovereignty you’re looking for, you've come to the wrong Brexit.