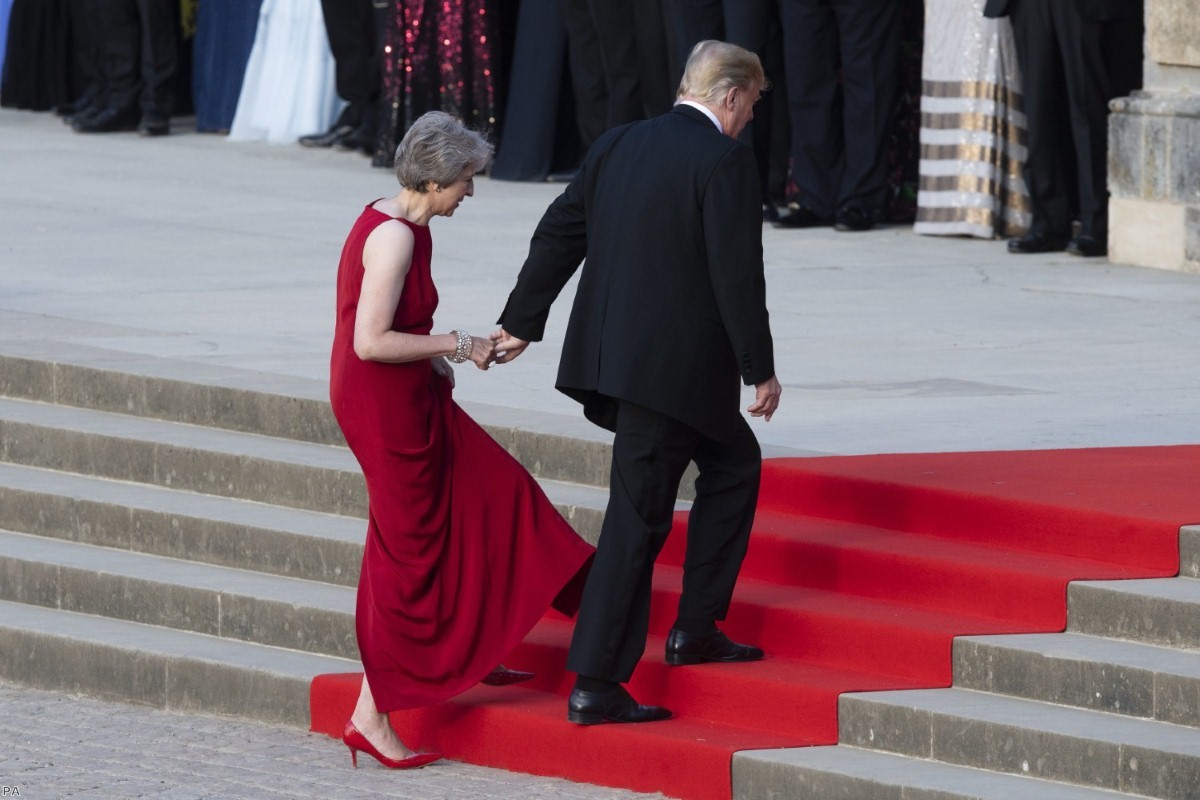 Many Brexiters seemed triumphant when Donald Trump gave his interview to the Sun newspaper last night. It is extraordinary that people who have defined themselves tirelessly as patriots over the last few years should be so unmoved by the sight of a foreign leader bullying a British prime minister on home territory.

It is simply unprecedented, in terms of diplomatic protocol and basic human courtesy, for a visiting head of state to attempt to behave this way when visiting the UK, or indeed at any other time. But, as ever, those who speak loudest about their love of country are the ones who can be least relied on to act upon it.

The relationship between Theresa May and the US president is utterly toxic. She is hideously obsequious around him. Even on Thursday she constantly held out her hand for him to hold, seemingly unaware of how much damage had been done to her reputation by this image the first time it happened.

She makes the same mistakes, over and over again. Her decision to offer him a state visit almost as soon as she first met him was a disaster, connecting her to him by a moral umbilical cord and setting up the dominos for what took place this week, when she ends up giving him all the honours of a state visit, including a meeting with the Queen, while he disrespects her, and by extension the country.

It’s not even clear why May does it. Having signed up to EU rules on goods, any US trade deal will be of very little breadth or depth. But still she continues – fawning over him just so he can belittle her again.

But there is one thing to be salvaged from Trump’s brazen behaviour and the fact that so many hard Brexit Tories support it: it shows what hard Brexit actually entails.

Of course, Trump wants Britain pursuing the hardest possible Brexit because signing up to US standards – especially on agricultural goods – is a precondition of a trade deal with him. That’s useful not just for US exports but as an opportunity to suck Britain into the US’ regulatory and standards orbit.

But his intention goes deeper. Trump’s actions are always against the rules-based international liberal order and in favour of international strongmen, like himself, Putin and even the lunatic homicidal man-child Jim Jong-un. In Brexit terms, that means sabotaging the democratic, continental level system for regulations practiced by Brussels.

But it does not stop there. Trump arrived in London from a Nato summit, where he had worked actively to destabilise the alliance. He attempted to demean and cajole Angela Merkel – he is always more hateful towards powerful women. First he claimed Germany was controlled by Russia and then he ended up pointing at her and stating "you, Angela" after a discussion on military spending. For much of the summit, there was a sense that the military alliance – arguably the strongest and most successful in the history of mankind, and certainly the greatest existing bulwark against Russian imperialism – would lose its leading advocate nation.

Although it is rarely mentioned, Trump is doing precisely the same thing at the World Trade Organisation (WTO). The US is withholding judges from the appellate court on a technicality, a move which slowly sucks the life-blood from the organisation and will eventually leave it unable to come to judgements on disputes.

Wherever there is a structure which holds back nation states, he tries to undermine and dismantle it. The world he aims for is one of the survival of the fittest, one in which large nations boss around smaller nations.

That is the future waiting for a medium-sized nation like Britain outside the EU, especially if it is not protected by the European eco-system of standards and regulations. There is no sovereignty and no control. We would be accepting sub-standard US goods by default, according to a treaty stitched up in some backroom by negotiators, and plunked down in front of the Commons in one package. The EU has democratic faults – although these are routinely exaggerated – but at least the rules and regulations are proposed by elected domestic leaders in the Council and then scrutinised by elected MEPs in the parliament.

Trump’s wanton rudeness may have been greeted warmly by hard Brexiters but it will hopefully send another message to those unsure of how to feel about the current state of Brexit negotiations, including the more pragmatic Brexit-supporting Tory MPs. This is the harsh world we approach on our current path. It is one in which we are routinely humiliated and bullied by larger nations. It is not tolerable and no British patriot should wish it on the country.