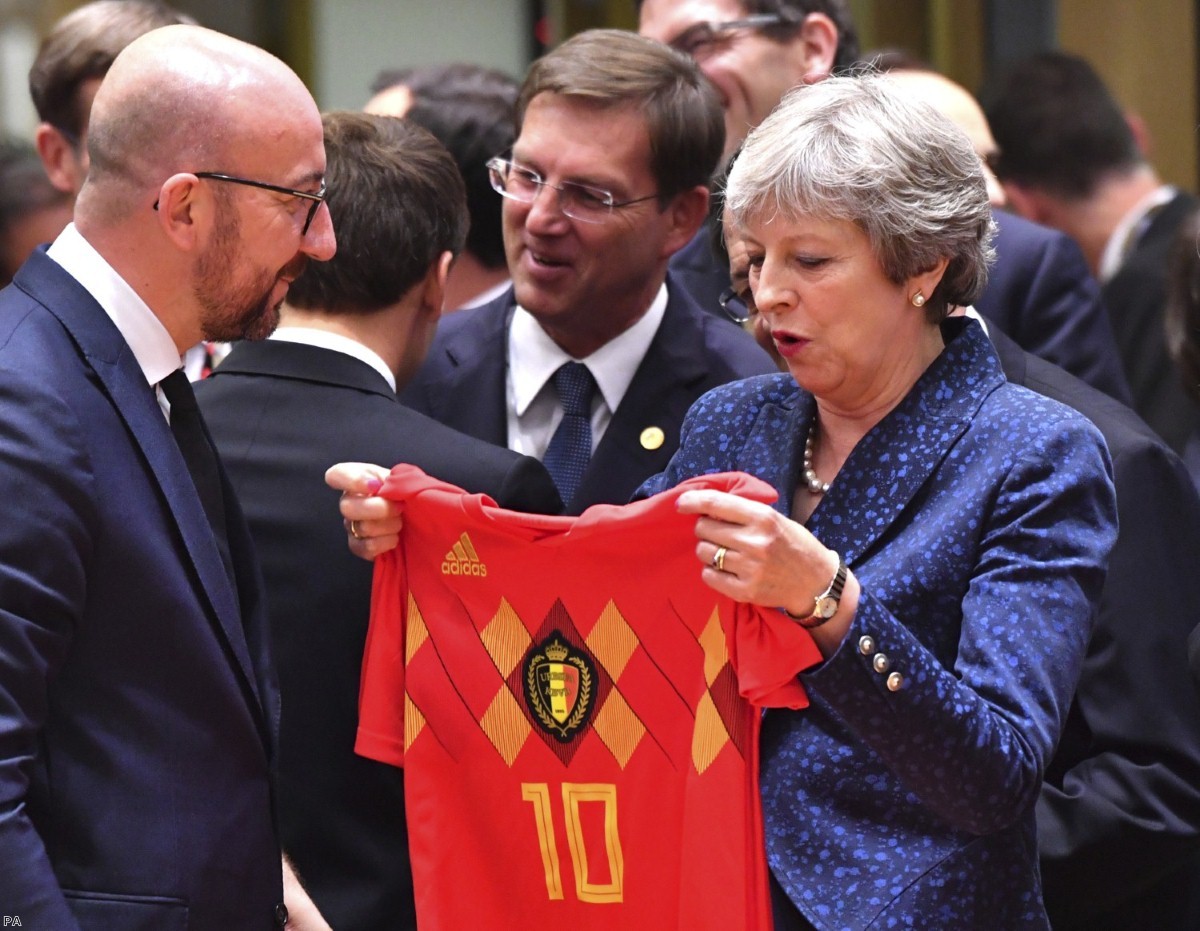 Week in Review: Quick reminder that everything is still a disaster

Long sunny days, unbeaten stretches of lovely weather, England doing well in an international tournament – no-one wanted to read bad news this week. Everything was quite pleasant and there was no need to spoil it with politics.

So it was quite easy to miss the EU summit. In so far as it got much coverage it was because the Belgian PM ambushed Theresa May with a football shirt. She grimaced her petrified smile in the usual manner. It was painfully awkward to watch, but ultimately just a slight uptick on the Theresa May Cringe Scale which we've all become experts in.

Outside of the general summer vibes and knockabout prankster humour of the European political class, things were predictably catastrophic.

The Europeans were engaged in bitter trench warfare on immigration. In their case this means immigration from outside the EU, and mostly asylum. The eventual solution – for voluntary regional processing centres – seemed both dangerous and ineffective. As reporters read it, news broke that up to 100 more people were suspected drowned as their boat sank off the coast of Libya.

This is the price of European cruelty on the refugee crisis. Lurking deep within the reactionary arguments there was once a grain of truth. The numbers were very severe two years ago. Italy and Greece have been left to handle the new arrivals with no solidarity from other EU states. But the rate of arrivals are now in steep decline and perfectly manageable. Countries like Hungary and Poland would have to take a few thousand people if there was a shared refugee scheme. The reason they do not do so is because of racism, not resources.

Amid this existential conflict, Brexit simply faded away. It was really only on the agenda as a dismissive shrug about Britain's inability to settle on a coherent negotiating position. There is a practiced European theatricality to this, but it is hard to fault them for stating what is so obviously the case. It is simply impossible to negotiate with a state which is not dealing with legal or trade reality and whose leadership is so weak it cannot deliver on the promises it makes.

May knows she needs a unified Cabinet position by the middle of next month. In truth, she needed it months ago, but regardless – that is the current deranged timetable. This is ostensibly going to be achieved via a Chequers lock-in – basically a pyjama party from hell – and then a detailed white paper.

Rumours swirl that the civil service has the Cabinet softened up for major concessions. But it is hard to imagine that they could move anywhere close to where they need to be. Preventing a border in the Irish Sea requires a new customs union and something which is basically single market membership in all but name, probably with job-offer contingent free movement. Anything like that seems hard to envisage. But anything that isn't that would put the border in the Irish Sea, which is also hard to envisage. It is a room full of spikes and there are no doors.

While the Brexit issue goes on life-support, May's Cabinet have been stabbing away at each other with considerable gusto. Gavin Williamson and Boris Johnson are attacking Philip Hammond and Theresa May. The defence secretary is building a new career in which he plays the roles of various imaginary friends all telling journalists about how tough he is.

Liz Truss, who is somehow chief secretary to the Treasury in this new mediocrity hellscape we've crafted, shot back at Boris Johnson with all the force and gravitas of a stale banana. Business secretary Greg Clark is doing the same behind the scenes. The Tory foreign secretary, in a development which must surely indicate something important about the historical moment we're living in, said "f*** business" without any consequence to his job whatsoever. The more you think about that the more extraordinary it becomes.

It's hard to see the prime minister being able to get all these guys on board with anything. She hasn't the authority and she hasn't really put in the work preparing Brexiters for the sacrifices that are to come. Perhaps there is some previously unrevealed tactical brilliance in her which will come alive at the last minute, but for now there is no evidence of it.

We've been given the pleasure of a week not discussing Brexit – but that is only because the internal divisions in the UK position now seem so intractable there is barely any point mentioning them anymore. The one thing that doesn't change is the timetable. We continue to speed toward the cliff edge, like drug-addled lemmings who learned to use a car.