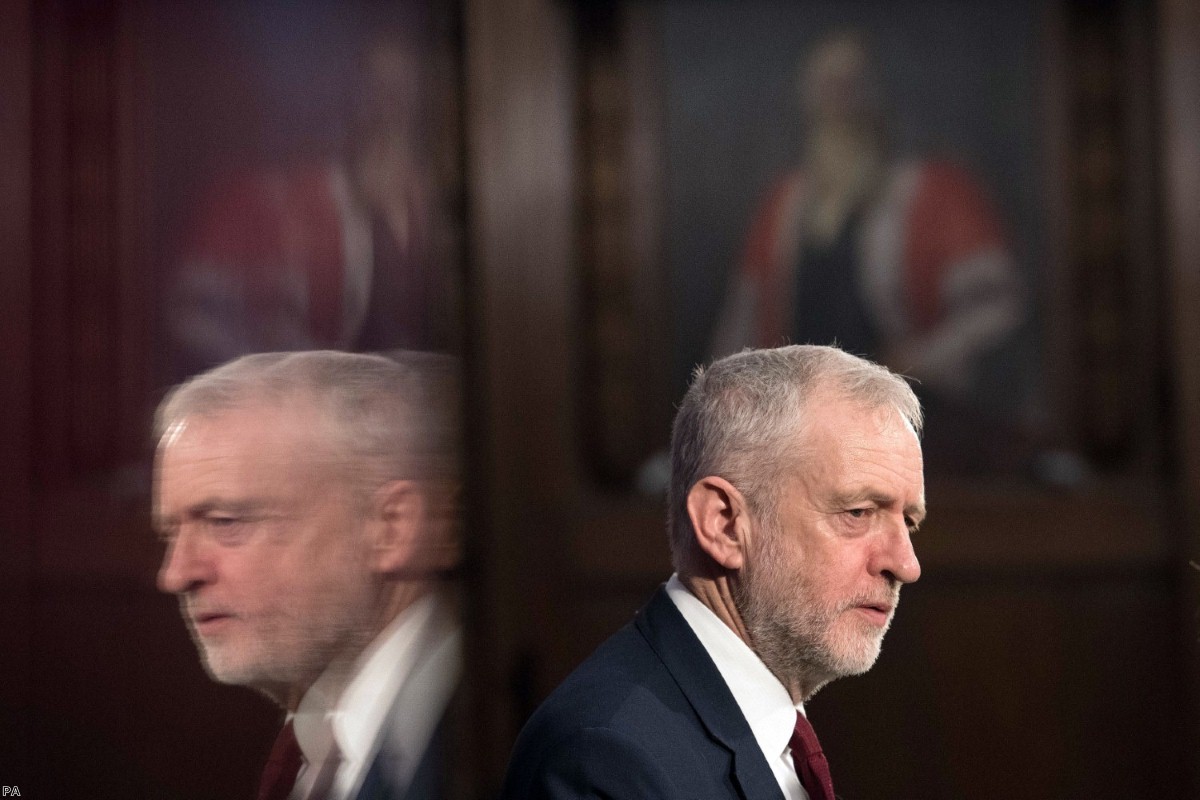 Lords vote: No place left for Corbyn to hide

Yesterday's vote was shocking. Just before 8pm, the House of Lords defeated the government by 245 votes to 218 and demanded that Britain stays in the single market. Eighty-three Labour peers resisted Jeremy Corbyn's demand that they abstain – nearly half the party's backbenchers. They were joined by 17 Tory Lords, who'd been whipped to reject it. It now goes back to the Commons, alongside the other rebel amendments.

These are unpredictable times, so people are starting to get their hopes up about what might happen. No-one expected yesterday's vote to pass – not political journalists, not the Labour leadership and not even the people who organised it. But even with that degree of volatility and momentum, it's hard to imagine that a vote for single market membership could pass the Commons.

The reason why is simple: Jeremy Corbyn. Unlike the customs union, he will whip his MPs against it, or at least to abstain, which adds up to the same thing. To defeat the government you need all wings of the Labour party united, alongside the other opposition parties, and a few Tory rebels. That just about gives you the numbers to defeat the Conservatives, DUP and handful of dyed-in-wool Labour Brexiters.

There will be other chances to fight for the single market, but that's probably where this amendment will die. Despite their current Che-Guevara-like rebellions, the Lords are still going to be pretty cautious about how much they interfere with this process. They see their job as asking questions. If their amendments are rejected once by the Commons, it's very likely peers will let them go. We're unlikely to see them stand firm and keep ping-ponging this stuff back-and-forth until the bitter constitutional end.

But last night's vote does have one very useful attribute, even if it won't outright secure soft Brexit. It shines a very harsh and unforgiving light on what the Labour leader is doing. He is going against the wishes of Labour peers, Labour members, Labour voters, and the public. And he is doing that because of an ideological commitment to hard Brexit.

The Lords proposal was for a specific form of single market membership. They want the UK to stay in the EEA agreement. This is sometimes called the Norway option, because it would mean us joining an organisation called European Free Trade Association (Efta) alongside that country, Iceland and Liechtenstein. Then through Efta we'd sign the agreement.

This would mean that we sign up to the four freedoms – movement, capital, services and goods – and take on EU rules. Trade would continue smoothly. We'd be snuggled tight into the European ecosystem, but we'd be formally out the EU, throwing out the bathwater of ever-greater-union but keeping the baby. We'd have achieved the arms-length transactional relationship which most Brits instinctively want when they think about Europe, but without sacrificing the economy or cutting ourselves off completely, in a fit of mad pique, from our closest and largest partner.

The Labour argument against this idea is identical to the Conservative one: staying in the EEA means you're a rule taker, not a rule maker.

This is about half true. You do lose your place forming laws, scrutinising them in the parliament and from some agencies, in some capacities. But there are avenues for democratic control. The Efta states have their own court in the EU system, called the Efta court. It is supposed to follow the European Court of Justice (ECJ) but because it's smaller it often reaches cases before it and then rules on them. The ECJ then follows its lead.

Efta states can also affect EU rules at the top end and the bottom end. At the top end they reach over the head of the EU and influence the global web of standards – informal rules set up in various sectors which then fossilise into regulations at the WTO, EU and in national parliaments. Britain is particularly well placed to do the same because it is a world leader in standards setting. Then they do the same at the bottom end, using their powers to have civil servants control the way in which EU laws are implemented domestically.

It's not ideal. None of the post-Brexit solutions are ideal. It involves the kind of compromise and complexity which populists on the left and right detest. But it is possible, it is democratic, it reflects the 'will of the people' in the referendum vote, and it would preserve the material conditions of this country's population.

Nevertheless, both Labour and Tories reject this model on the basis Britain could no longer influence the rules. The only difference is which rules they say they want to change. In the case of the Tories, they're honestly not sure anymore. They've been so turned around they don't really know which way is up. Maybe they want to deregulate and turn us into the Singapore of Europe, or maybe, as Michael Gove says, they want higher standards, so we can turn into some kind of animal sanctuary. For Labour it is more simple. It comes down to state aid.

These are rules which guide how countries can interfere in their economy. Corbyn supporters say it is an obstacle to fundamental change. In reality, it allows for anything between radical left social democracy and Thatcherite neoliberalism. It is Britain, obviously, which has usually pushed at the neoliberal end of that spectrum. And there's a stupefying irony to the fact that is Britain which now might leave the single market because it thinks the EU is stopping it reaching the other end.

In reality, state aid rules allow you to nationalise whatever you want. In some limited areas it means tendering for services must take place – this is to maintain continent-wide economic base-blocks, like rail freight and electronic communication – but even there, you can apply whichever social democratic conditions you want, such as environmental responsibility or workers’ rights. Only the most faded, 1970s, brown-suited, top down approach to full state ownership is ruled out.

State aid is actually quite a left wing initiative. It prevents multinationals going around the world, demanding governments give them cash so they'll stay put. By forcing governments to say why they are giving money to companies, it enforces transparency and prevents corporations setting up a welfare system for themselves.

If anything, the Labour position is less rational than the Tory one (quite a feat) because the EU are making state aid a condition of the final Brexit deal regardless of whether we are in the single market or not. So Labour is rejecting a single market deal because it involves a condition which they'd anyway sign away when they agree to a deal outside the single market. It is madness.

Failing to support this amendment is a betrayal of everything the Labour leadership say they stand for. They say they want a democratic party which reflects the will of its members, but 87% of Labour members want to stay in the single market. They say they have solidarity with immigrants and against the injustices of Windrush, but rejecting the Lords amendment ends free movement and throws three million European citizens into the chaos of Theresa May's immigration system. They say they believe in workers’ rights, but they are demanding we leave the part of the European project which most protects them. They say they will defend jobs, but rejecting the EEA puts manufacturing and agriculture in particular at risk. They say they stand for the young but they ignore the 72% of them who say they want soft Brexit.

None of this is likely to change. The leadership remains immune to evidence or argument on this issue. But at least now, after a brave showing in the Lords yesterday, they have nowhere to hide. Everyone will be able to see clearly that it's Corbyn who'll deliver the Tories' hard Brexit.