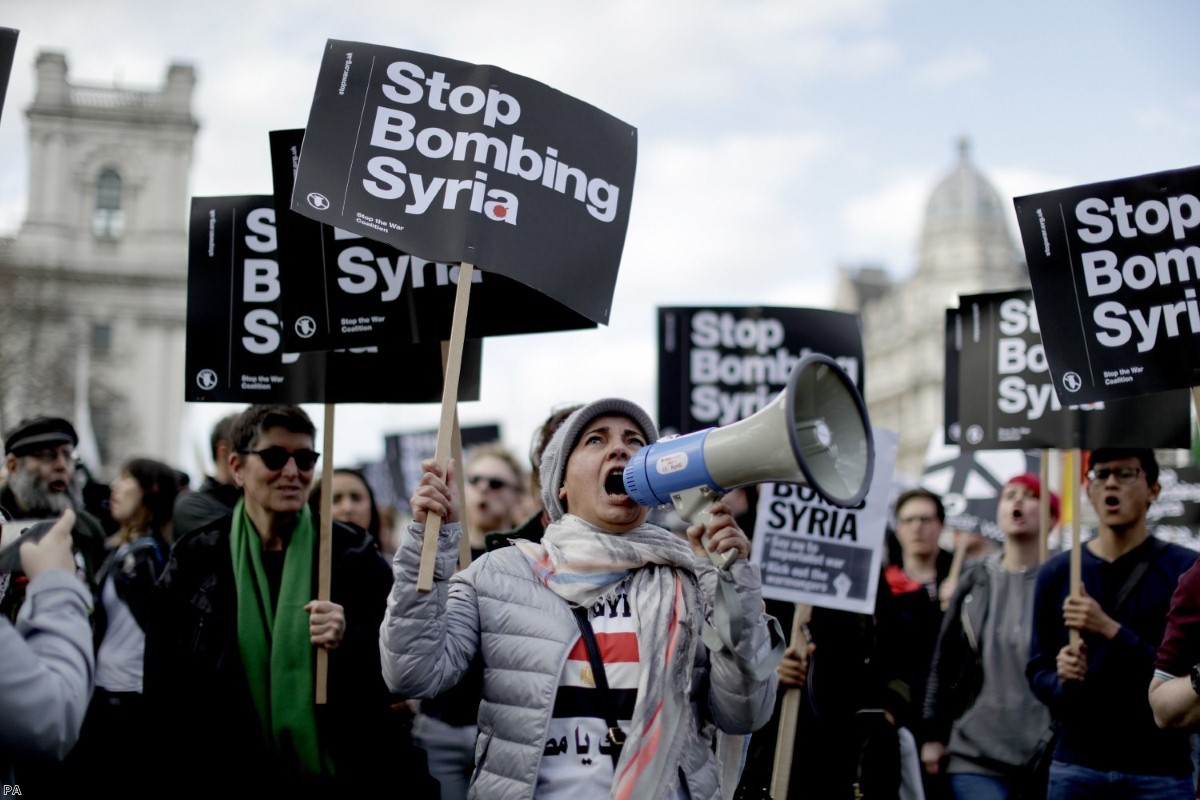 A charter for tyrants: The bleak reality of a Corbyn foreign policy

There were plenty of good arguments for not interfering in Syria last week, including the lack of a publicly-presented plan, the potential for escalation in the event of inadvertent hits on Russian personnel, and the character flaws of the US president, which make any military initiative unpredictable.

But it is telling that most political opponents of military action – which at the moment is basically Jeremy Corbyn's Labour leadership and the broader Stop the War movement – do not seem to be making these points. Instead, they are involved in a kind of processology, a fundamentally legal argument. It is a legal argument which allows Putin and Assad to do whatever they like, without consequence.

There is a reason that no evidence from Syria is incontrovertible. Reporting from the country is too dangerous. The Syrian Journalists' Association believes a total of 153 journalists have been killed in Syria since the uprising. This is not just about the inherent danger of war reporting, although the indiscriminate shelling which has been a feature of the civil war has of course played a part. It is also deliberate. Reporters without Borders estimated that three-quarters of the deaths in 2016 were purposeful, either by the regime or by Islamic fundamentalists in the opposition.

Without journalists to provide reliable information, Western media outlets and governments have been forced to rely on actors already on the ground. The White Helmets in particular have been crucial. They are a volunteer search-and-rescue operation in rebel-held areas which has provided much of the harrowing video evidence during the conflict of regime atrocities.

This group has demonstrated extraordinary bravery and been recognised by governments, NGOs and journalists across the world. They've addressed the UN Security Council, been the subject of an Oscar-winning documentary, been nominated for the Nobel peace prize, and been awarded the McCall-Pierpaoli Humanitarian Award by Refugees International.

Once the White Helmets began being treated as a viable information resource, the smear campaign began. The Russian state began a disinformation operation against them, in accordance with the standard Putin protocol. The Syrian regime did the same. They insisted they had been infiltrated by Islamic extremists. This was repeated on all the standard Russian media outlets and social media. Now you can barely bring up the name White Helmet before the troll army try to discredit what they have shown.

With the journalists taken care of, and the first responders discredited, Syria and Russia had only one further source of information to deal with: independent investigators. Russia has repeatedly vetoed the renewal of the mandate for the Joint Investigative Mechanism between the United Nations (UN) and the Organisation for the Prohibition of Chemical Weapons (OPCW) in late 2017. This prevents the OPCW from being able to identify who is responsible for chemical attacks in Syria and restricts it to only ascertaining whether the attack took place or not.

But even neutering it is not enough. The OPCW inspectors who arrived in Damascus on Saturday are being blocked from even entering Douma, where the chemical attack took place. It will have been well over a week since the attack until they can enter. Russia, on the other hand, was on site after a day and has had the area under state control since shortly after that.

OPCW inspectors still not given access to Douma by Russia and Syria, 9 days after alleged chemical attack, eight after Russia military experts got there, six after Russia declared Douma under state control, five after Russian military police deployed there.

Russia and Syria have conspired, through extreme violence, disinformation programmes, Security Council vetoes and on-the-ground obstruction, to make it impossible to secure independent evidence about what is happening in Syria. And yet opponents of military intervention demand very high evidential standards for what has happened. They want proof of the use of chemical weapons and who by. But where is this proof supposed to come from?

This is how post-truth works. You make it impossible to independently corroborate something, then you spread infantile conspiracy theories about it, and then an army of online 'critics' pop up to ask seemingly reasonable questions, like why Assad would risk military intervention. Ignorance breeds in the darkness created by an absence of information.

But those videos existed. They were real. They showed women and children killed by chemical weapons. We have open-source eyewitness reports of the attack coming from barrel bombs dropped by helicopters, which is not a tactic opposition groups have used but does correlate precisely with how the Syrian regime conducted previous actions of this sort.

The same process is underway when Corbyn places total emphasis on the need for UN authorisation for military action. He surely knows that any effort to secure Security Council authorisation will be vetoed by Russia. This is a bar which cannot be met.

Former attorney general Dominic Grieves is not prone to fits of passion, but yesterday he seemed as angry as he has ever been. Corbyn's position, he said, meant that "any tyrant, megalomaniac or other person intent on carrying out genocide, if they have the support of an amoral state on the Security Council, will be able to conduct that genocide with total impunity, even if it were within our power to act to prevent it".

This is surely correct. It does not matter how often Corbyn and his allies mouth platitudes about political solutions or diplomatic work. It is like asking a mugger to write you a sonnet. Russia is not going to engage in these initiatives. But it will certainly use the total emphasis on Security Council authorisation to its full advantage.

Many valid anti-war arguments have been raised in the last couple of weeks, including the important issue, addressed today, of parliamentary consent. But we should be clear what is happening on the use of evidence and the authorisation for intervention. Russia and the Syrian regime have made it impossible for the full threshold of evidence to be established or for the orthodox assessment of international law to be satisfied. They have done this consciously, by thwarting any avenue through which accurate information can emerge from Syria and by vetoing any initiative against their actions at the Security Council.

Those in Britain who continue to demand these standards with no reference to their obstinacy are doing Putin and Assad's work for them. They are playing the game acording to the rules they have set.