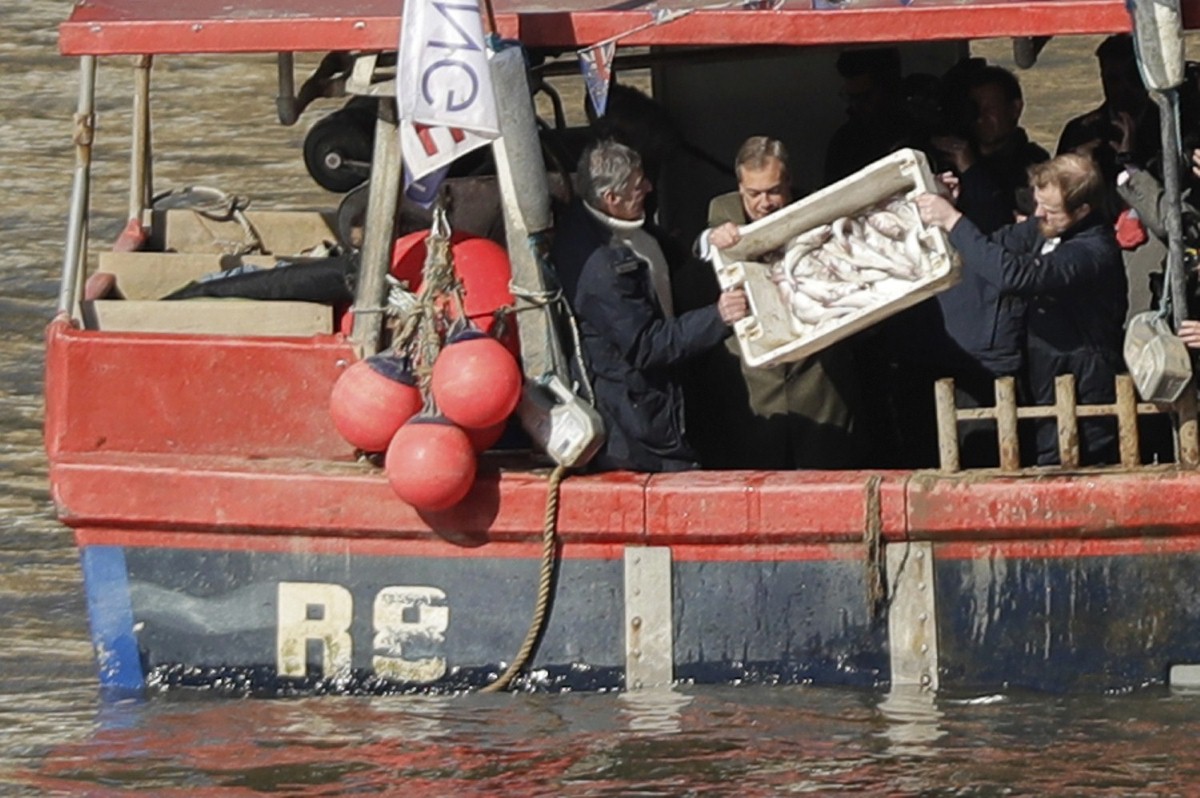 After a while you start to tune out, just so you can preserve a few brain cells. We lost an entire day of the news agenda to a man throwing dead fish off a boat. Another day went to a decision on where passports are made, which itself followed a seemingly interminable debate about their colour.

It quite often feels like the country has entered a senile phase. There is effectively nothing going on in parliament. There is no real policy agenda in health, or education, or national security, or business, or industry, outside of Brexit, which itself is a vacuum. Instead we have these colourful bits of theatre in place of politics. It's like being fed a plate of crisps for dinner.

But even here it is worth scratching the surface of the debate, because underneath it you find a web of lies, lobbying and basic trade reality. The gears of an economy and commercial law keep on turning, even if we try to cover them up with clown masks.

The fish debacle is a case in point. Fishing for Leave is supposedly outraged that Britain has not taken back control of its fish stocks during transition and wanted to highlight this by throwing dead fish overboard. This is a reference to the waste of fish under the EU quota system.

It's true the EU used to have a problem with managing fish stocks, which led to many fishermen discarding their catches to stay on the right side of the quota. Now those rules are about to change with strict new enforcement protocols on discards. But that requires a complex surveillance system and many fishing groups are desperate to avoid it.

It's for this reason that campaigners want out before the new rules come into force. They want the ability to discard fish, not the freedom to avoid doing so.

The entire European system of fish quotas is designed to prevent overfishing. If we were to just mark out territorial waters and let each country fish as much as it likes, there would be no coordination and no sensible allocation of resources. That's why the quota system, which assesses fish stocks and then parcels them out to countries according to a pre-designed system, exists. The British may not have got a great deal on this, but to present an exit from the system as an act of rebellion against waste is deeply cynical.

There is a similar mixture of ignorance and cynicism in the passport debate. British firm De La Rue lost the contract to make post-Brexit passports, which went instead to Gemalto, a Franco-Dutch company. The UK company's chief executive asked why "the British government thinks it's a sensible decision to… offshore the manufacture of a British icon". He has considerable cheek, given he provides services to two-thirds of the world's countries. Apparently breast-beating nationalism is not good enough for them but an an absolute requirement when it comes to us.

The Daily Mail berated the government in the most unhinged terms imaginable, saying ministers hated "our country, its history, culture and the people's sense of identity". Tory MP Priti Patel called it "a disgraceful decision", "perverse" and a "national humiliation".

MAIL: Today the Mail has a question for Britain’s ruling class: why do you hate our country, its history, culture and the people’s sense of identity?Stand up for Britain – for once! #tomorrowspaperstoday pic.twitter.com/HBXbeMTjuE

Tim Stanley, a leader writer at the Telegraph, said correctly that the decision was taken under EU rules, incorrectly that it is an "example of why we're leaving", falsely that post-Brexit Britain "will be free to prioritise UK business" and quite madly that this constituted "the joy of Brexit".

The passport decision was made under EU rules. It’s an example of why we’re leaving. Once we do, government of the day will be free to prioritise UK business or UK taxpayers. That’s the joy of Brexit! But, as we all keep saying, it ain’t happened yet.

Nearly all these commentators are wrong in nearly every way it is possible to be wrong on such a tedious issue. Firstly, it is possible to produce your passports, as the French do. Procurement rules do not force you to outsource things, they simply say what the rules are when you do.

Under EU procurement rules tenders should be based on price, quality and a few other factors. This seems a sensible basis to make decisions, rather than because a company happens to be based here. If the British firm's bid was of a higher quality and a lower price, it would have won. It was not, so it lost.

This provides a handy reminder of what happens when you allow nationalism to dominate economic debates. Firms which are guaranteed to secure contracts by virtue of their nationality rather than their service are liable to start offering a substandard product.

But even when we leave the EU, these rules will still be around. As the FT legal blogger David Allen Green pointed out, they'll almost certainly figure in the trade deal we do with the EU, alongside state aid and competition provisions, because they are seen as a core part of how the single market operates. They are also there at the WTO. And they are likely to figure in the trade deals we do with other states, like the US.

The passport issue was a jolt of rage, from Brexiters who loved the quick and compelling win of a new passport, and now had it to see it made all murky and laughable by the fact they were going to be produced in France. But it also revealed something meaningful and worrying about the future.

Brexit was secured by uniting globalist free market types with nativist reactionaries. The passports issue highlights how divided they are and how impossible it is to fit the emotional needs of the latter into the political programme of the former. For the time being they remain, just about, aligned – all holding out for the same end goal. But those bonds are becoming frayed and they will inevitably end up going to war with one another sooner or later.

That is not simply because of their temperament, but because the whole political project is based on mutually incompatible demands.