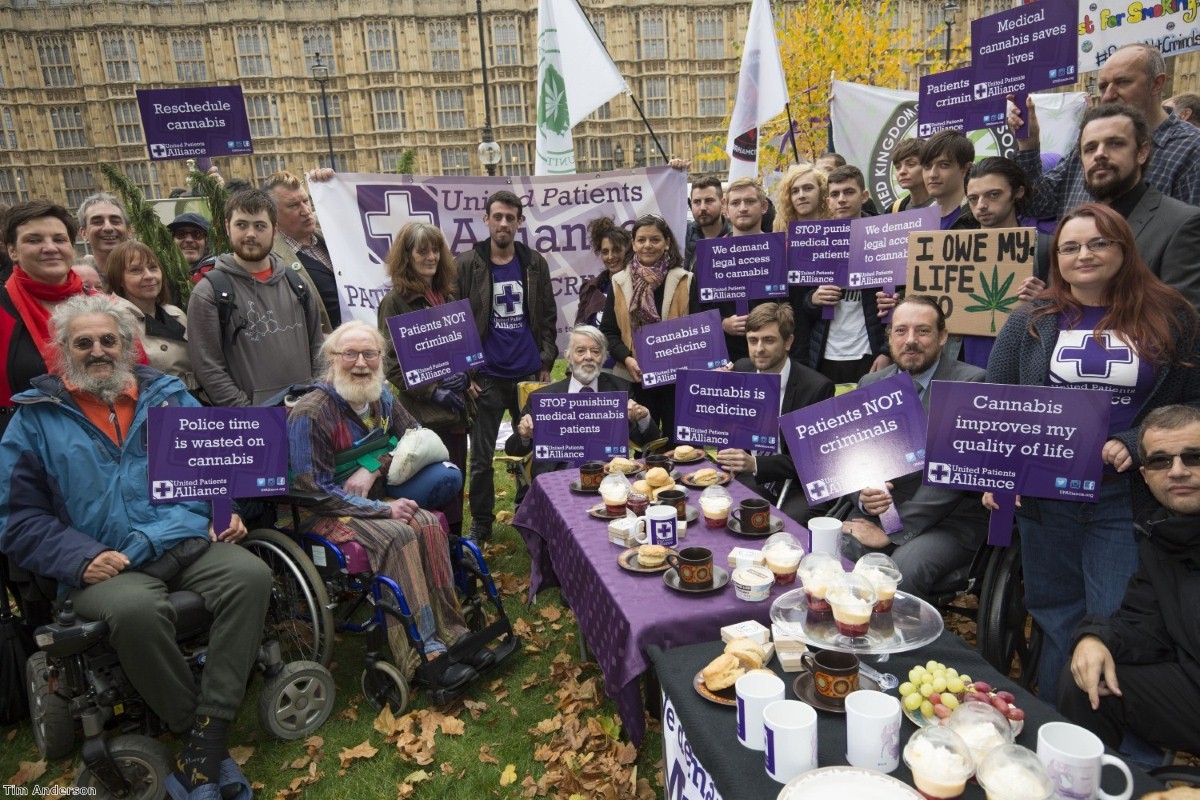 Why we took cannabis in front of parliament

On Tuesday, a group of around 30 patients suffering from Multiple Sclerosis, Crohn's, Parkinson's, Rheumatoid Arthritis, chronic and neuropathic pain, anxiety and other conditions gathered outside parliament and broke the law.

They consumed medical cannabis in an act of civil disobedience called for by veteran MP and cannabis advocate Paul Flynn.

During the drugs policy debate in the House of Commons earlier this year, Flynn called for patients to come to parliament and consume cannabis to "break the law and see what happens". According to Flynn very little would happen, thus showing the law to be "an ass".

United Patients Alliance – a non-profit advocacy and support group campaigning for legal access to cannabis for therapeutic purposes – responded to Flynn's comments by organising a 'tea party' protest outside parliament and enacting his call for civil disobedience.

We timed it coincide with a ten-minute rule bill for the legalisation of medicinal cannabis Flynn was introducing in parliament.

The bill is focussed on a change to the scheduling of cannabis in the Misuse of Drugs Act 1971. Cannabis is in Schedule One, for substances that have no therapeutic application and a high potential for abuse. Heroin is classified in Schedule Two, because it does have a medical purpose. If cannabis were moved from Schedule One it would immediately clear away many of the impediments to research and allow doctors to discuss cannabis with patients without fear of losing their license.

The patients had prepared tea, scones and cakes for the protest. Some of the offerings were 'medicated' with infused cannabis preparations.

Flynn came out and sat with us, alongside other brave political figures, including MPs Tonia Antoniazzi and Layla Moran and North Wales police and crime commissioner Arfon Jones. Flynn and Antoniazzi were recently appointed as patrons of the United Patients Alliance, giving their support to the campaign to allow patients access to legal cannabis.

All three MPs had personal experience seeing medical cannabis being used to improve the quality of life of Multiple Sclerosis patients.

"A close friend of mine consumes cannabis as effective relief from his Multiple Sclerosis, without which he could never leave his house. It is criminal that it's a crime. If you are in pain you deserve to have something that will make your life better."

Moran spoke emotionally about a friend of hers who had recently died after suffering "extraordinary pain" from her MS. 'I'm fairly certain I'm on the right side of history," she added, "and in 20 years we'll be asking why we had to campaign so hard to get it."

While the MPs adjourned back to the Commons for the reading of the bill, there were speeches from patients themselves.

Alex Fraser, a 26-year-old who has had Crohn’s disease since he was 19, said that he consumed cannabis to relieve his symptoms.

"I have tried stopping and my symptoms always increase dramatically. My pain is worsened and I often can't eat or sleep without severe discomfort. I have also taken prescription medications and can safely say that cannabis is the most effective treatment for my Crohn's disease that I've tried."

Flynn's 'Elizabeth Brice' Bill is scheduled for a second reading on 23rd February 2018. It's named after a long-time MS patient and campaigner who Paul Flynn conspired with some years ago to help consume cannabis tea on the balcony of the House of Lords. She campaigned under the pseudonym Claire Hodges but sadly died from her illness in 2011.

The likelihood of the bill passing into law is very small indeed, and even if it passed second reading it is unlikely that there would be enough parliamentary time before the end of the year to act on it. Only three private members bills under the ten-minute rule have made it through into law in the last 20 years. But then, one of those three bills was raised by Paul Flynn.

All we can do is keep making the case, keep pursuing parliamentary means of change, and keep risking acts of public disobedience. Eventually, the political class will see sense.

There are up to a million patients in the UK who consume medical cannabis. Each of those patients will be hoping that Flynn is able to repeat his previous success so that they are no longer deemed to be criminals.

As political director of the United Patients Alliance Jon Liebling said at the tea party: "The fight for the legalisation of cannabis is coming. But let's clear the sick off the battlefield first."

Jon Liebling is political director of United Patients Alliance, which campaigns for a United Kingdom in which patients can legally access medical cannabis to treat their chronic conditions.