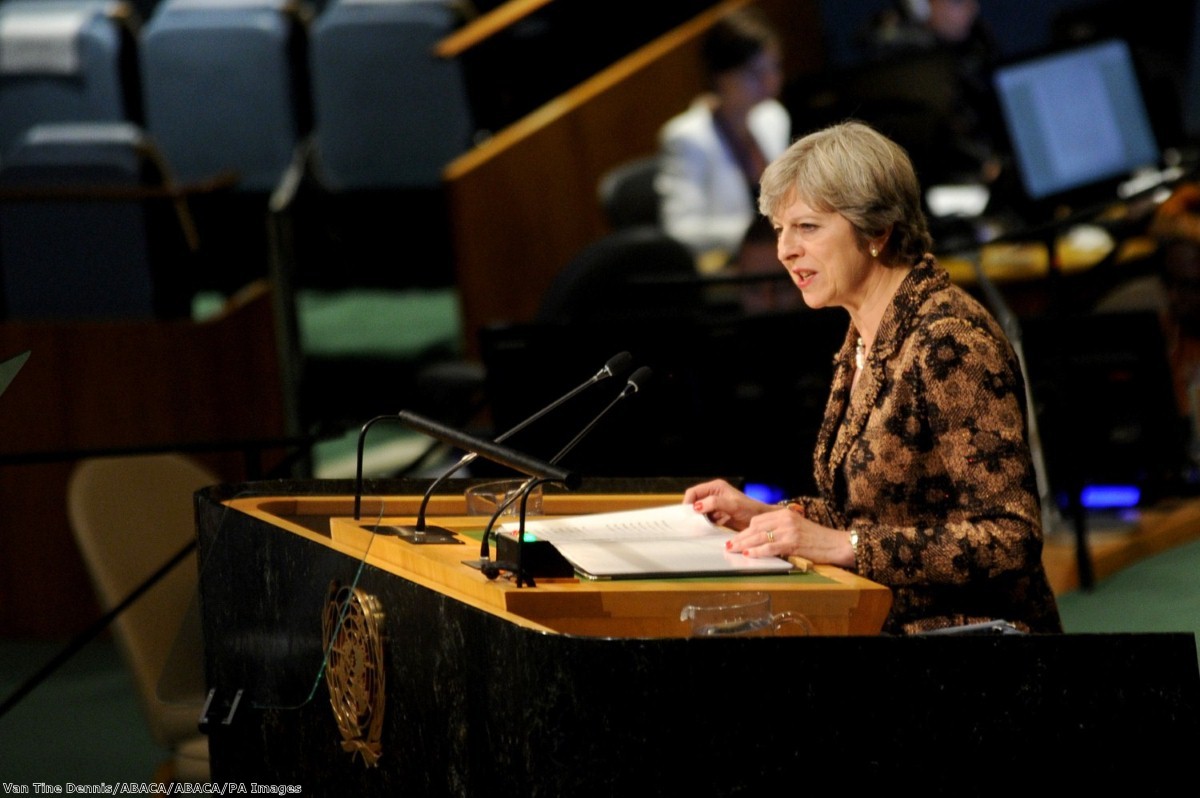 May humiliated on world stage as Brexit bites

For those who care to look, the signs are everywhere. Brexit is dissolving Britain's status in the world. The effects are not subtle. They are as demonstrable and obvious as a lack of leaves in winter. The only reason they are not more widely discussed is because the UK press is so fully behind the project.

The BBC news reports on Theresa May's speech to the United Nation yesterday did her the considerable service of staying close on the lecturn and only occasionally cutting away to the face of Priti Patel and Boris Johnson in the auditorium. If they had panned out, we would have seen that the hall was largely empty. No-one had bothered to come.

Don't kid yourself that it was always this way. It wasn't. And don't kid yourself that this is about Britain's relative size in the world. It isn't. French leader Emmanuel Macron secured a sizeable audience for his speech. This is the natural reaction to a country which seems to be actively trying to make itself irrelevant.

That point was observed by the Canadians, who May had visited before heading to New York. The EU-Canada trade deal (Ceta) is about to come online after seven years of work. It's mostly a goods agreement, so it isn't the most valuable deal imaginable for a service-based economy like the UK's, but it is nevertheless expected to be worth about £2.1 billion a year. We will get to enjoy it for about 18 months until Brexit pulls us out. So May travelled to beg Justin Trudeau if he'd copy-and-paste it into a UK-Canada deal. It's telling that the great bespoke deals Brexiters promised – ones which recognised Britain's economic requirements – have now been downgraded to Ctrl+C jobs of what we'd have got in the EU. This is about swimming furiously to stay still, in the best case scenario.

Trudeau agreed to set up working groups on how it might be done, allowing May to claim that she had secured a win. In reality, these working groups are unlikely to do much meaningful work. The Canadians do not want to offend the Europeans and, more importantly, they do not know the value of a deal with the UK until they know its relationship with Europe. Are they exporting to 60 million people or 500 million? These are rather significant differences.

It was worth reading the Canadian press to see just how much Britain has been reduced in the eyes of the world. The Brexit decision itself is seen as foolish, but the subsequent cack-handed negotiations have been even more damaging.

"If Britain's acrimonious divorce talks with the EU are anything to go by, the country isn't well-prepared to negotiate a new global web of trade agreements," the Canadian Broadcasting Corporation (CBC) concluded. "Britain's Brexit negotiators have been consistently outplayed by their EU counterparts, who feel that both time and the EU's rules are on their side.

"Attempts by the UK to reset the terms of the negotiations, or to try to change the topic from the divorce settlement to the new relationship that will emerge after the split, have all failed. And as Britain turns to Canada and other nations to try to shore up its trade networks, its negotiators face a similar problem: everyone knows they are desperate for a deal.

"And this Thursday, Canada will gain precisely what the UK is now on course to lose: free trade with the European Union."

The desperation of Britain will not just be noted by journalists. It will be well understood by the trade negotiators we would sit down with if substantial talks did open with Canada, or China, or India, or the US. That is the real danger – that ministers need a trade deal and therefore sit down and agree any terms with countries which see how desperate they are. The Brexiters' political victories are almost entirely correlated with the circumstances of an economic defeat.

But it is that last line of the CBC piece which is most damning. Everyone else is desperate for the precise thing Britain is giving up: trade with Europe. And you can see why. Yesterday's Organisation for Economic Co-operation and Development (OECD) forecasts for 2018 put Britain at the bottom of the league of developed economies, below even Italy. That deserves a moment of recognition. Even the country whose debts and unemployment rates are the greatest threat to a eurozone project which Brexiters said would drown us is outperforming the UK.

Britain's economy is expected to crawl along at one per cent next year, as a result of inflation – itself from the depreciation of sterling after the Brexit vote – as well as a decrease in investment and continued uncertainty over Brexit. We're behind other major industrialised countries, like the US and Canada. But crucially we're also behind the supposedly schlerotic European economies Brexiters demanded we free ourselves from. We're even behind the dreaded eurozone, which is expected to enjoy nearly double our rate of growth at 1.9%.

Just one day in the life of Brexit Britain. Speaking to an empty hall at the UN. Belittled for its desperation by the press of countries it seeks trade deals with. Downgraded behind all competitors by economic experts. This is the brutal reality of Brexit. And it hasn't even happened yet.