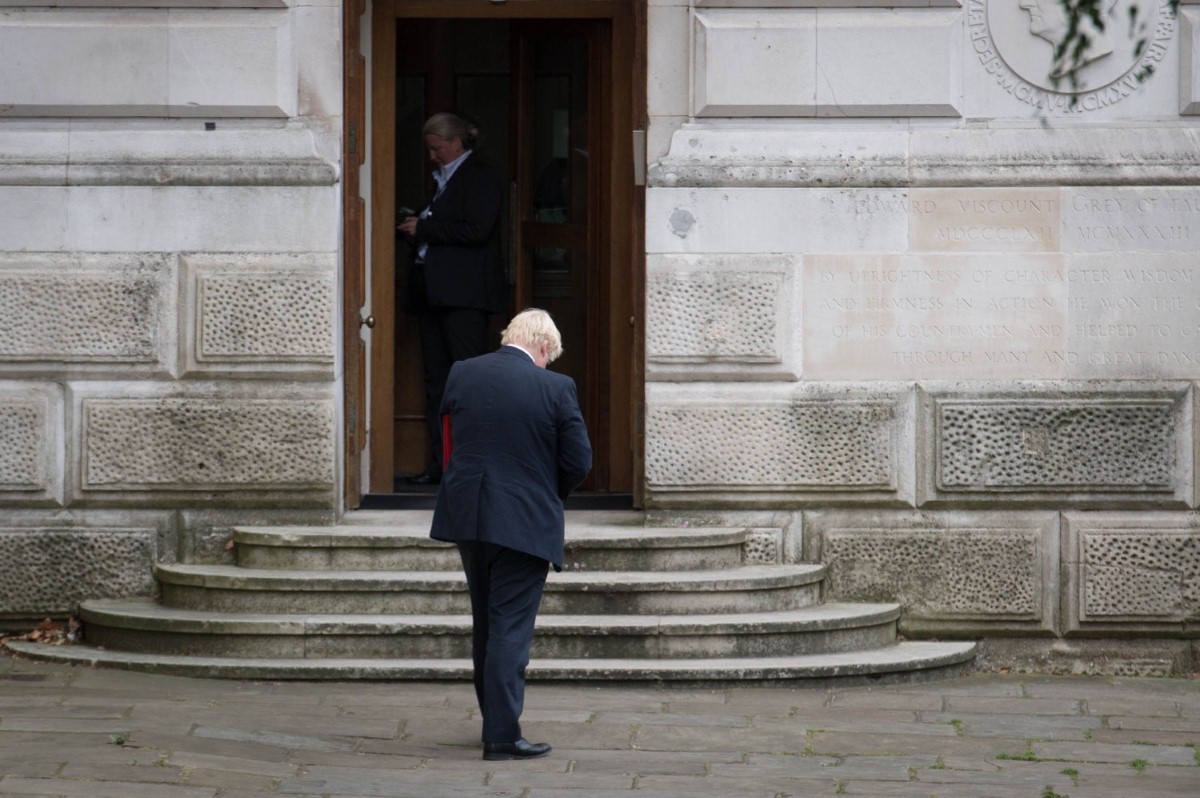 Anyone who is remotely interesting is many things all at once. And they know, from an early age, that people will try to stop them being interesting.

The tedious only ever want you to be one thing. It starts early in life. They tell you to only like boy stuff or girl stuff. If you're a boy you have to like sport and cars and guns. If you're a girl you have to like dollshouses and pink dresses and princesses. Then when you're a teenager they ask you to chose again. You can be a goth, or you can be indie, or you can be into rugby (these are all categories from my youth, which are presumably completely out of date now, but the basic mechanism will be the same).

This goes on throughout your life, from the way you do work, to the people you date, to your posture, to your politics, to your hobbies. You are asked to be one thing, easily definable. Anthing else is confusing and upsets those with simple minds.

This is what Brexit is, in terms of national identity. It is the demand to be only one thing. Put aside all the technicalities and you'll find this sentiment at its heart.

The first moment it was officially validated as government policy came nearly a year ago, during Theresa May's conference speech.

That was the moment the culture war became real. That was the moment we realised how deeply the Brexit project was changing what it was to be British. This was the politicisation of the idea of only ever being one thing. It was an explicit demand, from the prime minister of Great Britain and Northern Ireland, to conform – to prove your allegiance.

It's an old idea, probably even a basic human impulse. It allows us to simplify life into manageable categories, to define people as being in the in-group or the out-group. It is the monkey part of our brain shouting in our ear.

In modern British politics its most recent advocate was Norman Tebbit. Younger readers will be lucky enough to have never heard of him, but he still haunts the House of Lords, a ghoulish unreconstructed old right winger whose ideas are suddenly much more alive than we could ever have predicted a couple of years ago. "A large proportion of Britain's Asian population fail to pass the cricket test," he told the Los Angeles Times in 1990. "Which side do they cheer for?"

Anyone with a passing acquaintance of British Asian communities will know that the test refutes itself. It has within it the undermining of its own premise. Many Asian Brits support their country of heritage in the cricket and England in the football. Their identity is mixed. It is fluid. Tebbit could never understand this, just like he could never understand how an Olympic medallist like Leo Manzano would celebrate by running with an American and a Mexican flag together. These feelings are beyond the limits of his imagination.

He is not alone. This weekend, Boris Johnson, who once strove to present himself as a liberal politician when needing to seduce Londoners, struck an altogether more Tebbit-like pose as he positioned himself to run as a 'real Brexit' Tory leader. In his 4,000 word piece for the Telegraph he raised the idea that young people demonstrating against Brexit were traitors to their country.

"I used to look at the Brussels bumper stickers saying 'Mon patrie, c'est Europe' and think it was a bit of a laugh, and that they would never engender a genuine Euro-patriotism, or compete with people’s natural feelings for their own country. I have to say that I am now not so sure. I think I was complacent. I look at so many young people with the 12 stars lipsticked on their faces and I am troubled with the thought that people are beginning to have genuinely split allegiances."

He was defended by Iain Duncan Smith, another politician whose intelligence is as small as his imagination. "If you get confused about where your allegiance lies," he said, "I think it confuses your attitude about how you govern yourself."

"If you get confused about where your allegiance lies, I think it confuses your attitude towards how you govern" – Iain Duncan Smith #bbcdp pic.twitter.com/yAj7IOORFF

Unlike other areas of Brexit, these ideas do not provide firm numbers. It's not like leaving a customs union. The effect is hard to capture. But they do have concrete political outcomes.

As Rafael Behr pointed out in the Guardian, EU citizens are being asked to take the path to full British citizenship if they want to keep all their rights and protect themselves against the future policy decisions of a Westminster government. They have to be one thing, or the other. To be a European in Britain – one who feels French, let's say, and maybe a bit British, and also perhaps a Bristolian – that is a thing of the past. That is a remnant of the times when one didn't have to define oneself by a single identity.

It also has a concrete effect on the Irish border, where the demands of the customs union create political ramifications – in this case physical evidence of separation. In a recent piece in the New York Review of Books, Fintan O'Toole noted how this is a fundamental rejection of the basic assumptions of the Belfast Agreement, which recognises "the birthright of all the people of Northern Ireland to identify themselves and be accepted as Irish or British, or both, as they may so choose".

"It accepts, in other words, that national identity (and the citizenship that flows from it) is a matter of choice. Even more profoundly, it accepts that this choice is not binary. If you're born in Northern Ireland, you have an unqualified right to hold an Irish passport, a British passport, or each of the two. Those lovely little words 'or both' stand as a rebuke to all absolutist ideas of nationalism. Identities are fluid, contingent, and multiple."

In the months after the Brexit result, David Goodhart published a very well-timed book in which he described a new political divide between the Anywheres and the Somewheres. It excited a lot of broadly liberal media people in London who took the Brexit result as a reason to self-flagellate rather than fight for their values. It is one of the few failures of liberalism that its adherents' natural instinct is to politely apologise for their principles rather than promote them. The referendum result has done nothing to cure them of this affliction and may well have exacerbated it.

Goodhart's absurdly reductionist analysis was that there were a bunch of well educated, high earning people who didn't really have a sense of belonging and could live anywhere. They had been trying to impose their wicked sense of isolated utopianism on a uniform mass of badly-educated, lower income people who were proud of their communities. It's hard to tell who should have been most offended: the wealthy or the poor. Both had been libelled.

Although it is just a nonsense caricature, the Goodhart analysis helped to show the poverty of thinking, the level of outright slander, directed towards those with fluid identities. What he did not understand, and what his eager followers had not comprehended, was that people can have mixed identities. They can have an international outlook, they can live in different places, they can speak more than one language (sometimes in the same sentence), they can watch Scandinavian TV, or paint EU stars on their face, or listen to East African music, or support the Pakistani cricket team, or carry two passports, or eat food from the Middle East – and still be patriots for their country. In short, they can like sausage rolls and samosas too.

If they choose, they can even be British and not be patriotic. That is allowed too. In fact, it might be a considered a victory for the British personality that people grow up in its embrace without feeling they must theatrically demonstrate their allegiance to it.

These ideas are not fashionable anymore. We are in the age of easy categorisations. There is a dirty political reason for this. As Nick Cohen said on the Remainiacs podcast last week, the Brexiters have set themselves an impossible project, so they must now question the patriotism of anyone who points out their failures. Their critics are being set up as the scapegoat for their own strategic ineptitude.

But there is a deeper emotional reason behind it too. Brexit is based on easy categorisations. That's why so many of its adherents cannot understand, for instance, that choosing to pool sovereignty is not the same as having lost it. Because one thing is white and one thing is black and nothing shall ever be shades of grey.

The fight over Brexit takes place at many levels. But this, the deep emotional underpinning of the project, is arguably the most pernicious. We will see much more of it before it is over. It is the battle cry of the mean-spirited. It must be defeated.