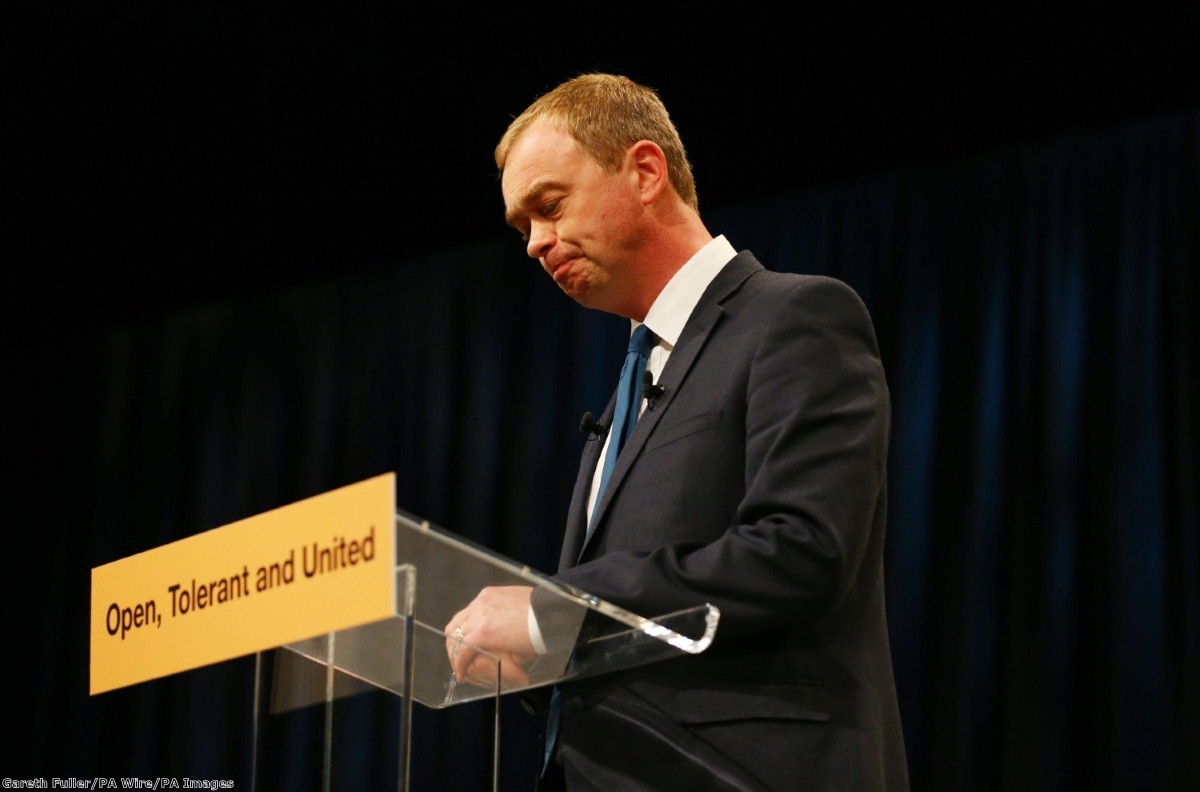 The illiberal persecution of Tim Farron

There are plenty of reasons to want the Liberal Democrats to have a new leader. In a period defined by Brexit, their 100%, undiluted Remain message has failed to get through, suggesting there may be a problem with delivery or that they misjudged how to respond. Some think Tim Farron doesn't really look like a leader and struggles to get a hearing with the public.

But that isn't why he has stepped down. He has been forced to step down because of his faith.

"To be a political leader, especially of a progressive liberal party in 2017, and to live as a committed Christian, to hold faithfully to the Bible's teaching, has felt impossible to me."

We should be deeply uncomfortable with what has happened here.

Let's be clear. Farron's voting record is not perfect. But any voting transgressions he made are below the level of what would warrant him having to step down. They are either old votes which he later rejected, or on issues where liberal arguments can be made either way.

The most troubling instance was in 2006, when he voted to reduce the abortion limit to 21 weeks and introduce compulsory counselling to women wanting one. This is liberally intolerable but it was some time ago and never repeated. Farron abstained from votes on abortion three times in 2008 (when Theresa May voted for the proposal to reduce the limit to 20 weeks), then abstained again in 2011, 2015 and 2017. As Farron says: He got it wrong, he has changed his mind, he pledged to always vote on the basis of the evidence. A single vote in 2008, which is not repeated despite several opportunities for him to do so, seems insufficient to cost Farron his job. And if it should cost him his job, he should never have been elected to the leadership in the first place.

On gay rights, there are also a couple of troubling issues. Farron's votes against gay rights all seem to stem on protecting workers who want to refuse to serve gay people. He voted against a law that made it illegal for public services to be denied to gay people, he voted for the right of registrars not to carry out gay marriages if they objected on religious grounds, and he also voted to increase protections for people who don't want to conduct or participate in a same sex marriage ceremony.

You can construct a liberal argument for this, saying that you are protecting the right of individual to withhold their labour according to their own personal conscience. It's not a very good argument. Doing so restricts the freedoms of those who want to access services on the basis of their identity, which seems an intolerable price to pay for another's personal freedom. But it is a valid argument and you can imagine liberals going either way on it. Indeed, they have done.

Elsewhere on gay rights, Farron's record is very strong. The very good Public Whip website gave him a 90.4% score on same sex marriage. Their system is particularly useful because they do not just list the votes. They weight them according to whether the MP backed the most important votes on an issue. This is revealing in Farron's case because his votes against were on those specific areas around protections for religious workers, rather than the right of gay marriage itself. It highlights the reality of his commitment to the basic liberal principle at the heart of the issue.

Is this a perfect record? No. But it is below the level of what would warrant Farron having to step down. You cannot realistically make the case that Farron as prime minister (stop laughing at the back) would vote to limit people's freedoms on abortion or gay marriage and I've seen no-one even try to claim that. And that is why the debate has focused not so much on his record, but his views.

In 2008, Farron told a Salvation Army magazine that he thought abortion was "wrong". During the campaign he was asked repeatedly – to the point of mania – if he thought gay sex was a sin. He tried valiantly to avoid the question. This was ostensibly because he didn't want politicians to have to turn into theologians. But it seemed pretty obvious it was because he did think it was a sin. After all, he was happy saying being gay was not a sin, but took longer to confirm the same for gay sex. This is pretty common from Christians, who tend to condemn the action but not the identity.

After a while, he had to give in and say gay sex wasn't a sin. The sight of him doing so troubled me deeply. It felt like a witchhunt. And it looked like someone having to renounce a tenets of his faith in order to satisfy modern societal norms.

This is not liberalism. Farron is entitled to think gay sex is a sin. That, after all, is in the Bible that he adheres to. He is entitled to think abortion is wrong. What he is not entitled to do is to limit the freedom of others to do these things. Liberalism is not about approval. Liberalism couldn't give a damn what you approve of. It is the belief that each individual must be free to do whatever they like up until the point where it limits the freedoms of others. As long as he does not plan to stop gay men having sex or women having abortions, Farron can hold whatever spiritual mumbo-jumbo in his head about their actions that he likes. Liberalism is defined by actions, not thoughts.

It is hard to shake the feeling that Farron has essentially been persecuted because of his faith. It is not really his record that is under question. It is that his personal convictions are unsayable among liberals. And that seems to completely miss the point of what liberalism is about.