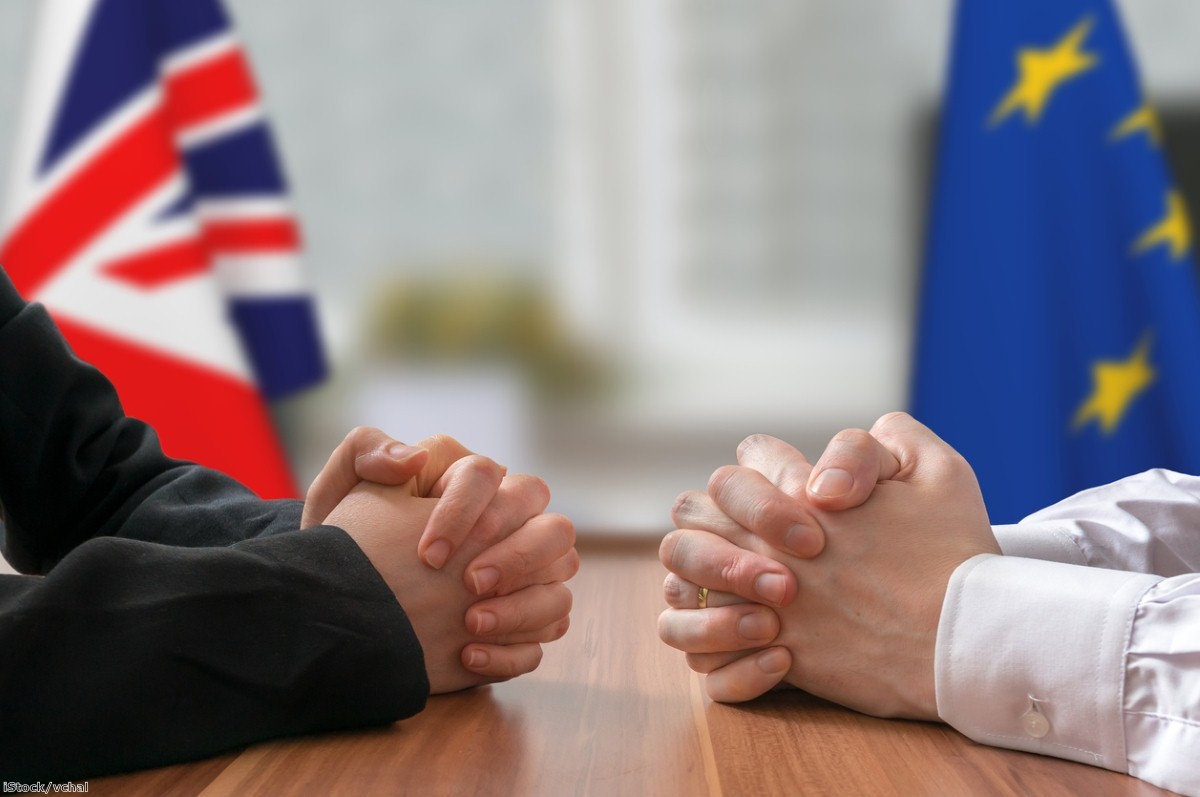 The election was a catastrophe for the Tories and everything is back on the table. Forces across parliament are pressing for their respective leaderships to adopt a more moderate interpretation of the Brexit mandate. There is a potential shift happening.

All of this is typically called 'soft Brexit'. But when people say 'soft Brexit' they're not always talking about the same thing. There's often a lot of hard Brexit under that soft Brexit wrapper. And with the government coming under severe pressure to rethink its strategy, it could well try to flog you some form of soft Brexit where the small print doesn't match the ad.

So here, to help you assess any offers which come your way, is a brief explainer of the different types on offer.

The standard definition of soft Brexit is to leave the EU but stay in the single market and customs union.

The single market tries to apply a uniform regulatory structure to products and services made in member states of the EU. This means that someone selling from France into Italy, say, knows that the regulations on either side are identical, be it on the noise level of lawnmowers, the chemical safety specifications of a child's toy, or the surveillance arrangements of currency traders. And that in turn means goods and many services can cross the border without being checked or doubted. Everything flows smoothly, allowing trade between Britain and Portugal to happen as easily as trade between London and Bristol.

The good side is that this allows you to massively increase your exports and make imports cheaper for domestic consumers. The downside – for some people – is that you must allow goods, services, money and people to move freely from all the countries in the single market. You also need to produce things to a continent-wide specification even if you’re just going to sell it down the road, which can be irritating for small businesses.

The customs union, meanwhile, basically harmonises tariffs – a tax on goods people sell overseas – across Europe and eradicates them within Europe. So if America wants to sell a car to Europe it will pay a ten per cent tariff to sell it to France and the exact same tariff to sell it to Spain. But if France wants to sell it to Italy there is no tariff. To work out tariffs there are very complex tests called country-of-origin checks. These are really laborious and bureaucratic and companies absolutely hate them. Many of our exporters haven’t faced the expensive, time-consuming nightmare of what they entail yet – but if we're outside the custom union, they soon will.

None of these countries are EU members. That isn't just a technical distinction, it has big implications. They are not part of a project dedicated towards ever closer union, so they have a more arm's length relationship with Brussels than the UK. They are exempt from EU policy on justice, home affairs, foreign policy, defence, agriculture and fisheries. But they do, on the other hand, have to accept free movement of goods, services, capital and – yes – people. There is a bit of wriggle room there. Article 112 of the EEA agreement allows for 'safeguard measures' in case immigration raises serious economic, societal or environmental difficulties, but it would need quite a bit of work to make it viable. EEA states are also outside the confines of the European Court of Justice (one of Theresa May's red lines) although the Efta court, which they are under, does have to take account of its rulings.

This kind of soft Brexit has many advantages. It would be infinitely easier than trying to secure a comprehensive trade agreement, which is the current plan. That would likely take up to ten years and leave you in a worse state than you started. It also largely removes the threat of a cliff edge where the UK drops out the EU with no deal and a black hole in its regulatory infrastructure. We would probably save a lot of jobs and livelihoods by staying in. Leaving the customs union is expected to cost Britain about £25 billion a year, the single market up to £36 billion. It is by some distant the safest, most moderate interpretation of the vote.

There are still downsides, however. Being in the single market means you have to accept EU rules governing it without being in the forum which decides them. Again, there is more wriggle room here than is commonly made out, but it's still restrictive. And it is not 100% 'taking back control'. Also, the EEA agreement doesn't cover financial services, so that would still need to be worked out.

Alternatively we can mix and match these options. For instance, Britain could stay in the single market but leave the customs union. This is actually pretty attractive, because it allows you to do independent trade deals.

The key trade off here is nimbleness versus size. Being wrapped up in the European project means we have access to half a billion consumers. So firms from overseas use London as a beach head and we get to enjoy the strength that comes from wielding this huge consumer economy when Brussels negotiates trade deals on our behalf. The flip side to this is that we don’t negotiate our own trade deals. As a services economy, we're forced to sit there while the EU comes up with a deal that works for everyone, including countries mostly interested in manufacturing exports or even primarily selling agricultural products.

Staying in the single market and leaving the customs union potentially gives you the best of both worlds. You're nimble and can sign your own trade deals outside of that EU straightjacket. But also, you can get better terms because you are a gateway to half a billion consumers, not just the 65 million in the UK.

You would still need to accept free movement though and you'd still have that problem of being subject to single market rules you were not in a position to formulate. Also, you would have to face up to the chance of an imposition of tariffs on our largest export market, plus the sudden introduction of country-of-origin checks.

Or you could try the opposite and leave the single market while staying in the customs union. The big advantage here is that you remove the threat of tariffs and country-of-origin checks, which would come as a huge relief to lots of businesses, especially in manufacturing and agriculture. And you’d do a lot to reduce the effect of a cliff edge, no-deal Brexit. Meanwhile, you can still promise voters that you're going to end free movement by leaving the single market. Labour in particular will be attracted to this option.

But you'd still take a massive hit to your exports by leaving the single market. And there is also a big political cost. The prospect of future trade deals is the great sunny upland of the Brexit debate. The whole idea of this project is that we act independently and do whatever we like. Those trade deals with the USA and India and Brazil and the like are the best concrete example of that and have been treated as a key test of Brexit. Staying in the customs union means it'll never happen. It's all drudgery and no reward at the end.

This form of soft Brexit has nothing to do with either the single market or the customs union. It has a much lower benchmark. It simply says that Britain must avoid a no-deal outcome at all costs. This is based on the danger to the UK's quality of life and international reputation from a chaotic Brexit. Labour already holds this position, having ruled out a no-deal outcome in its manifesto.

The problem with a no-deal outcome is not just that we'd lose revenue from the customs union and single market with no trade deal to replace them. It's more that we would not have set up the customs checkpoints and systems we need in time for that March 2019 cliff edge. That would lead to tailbacks of lorries at the border and a juddering halt to Britain's global supply chain. Not only that, but we'd overnight lose access to EU regulators on things like drugs authorisation and the handling of nuclear materials without any organisation standing by to take over the responsibility, leaving a massive black hole in our legal and regulatory infrastructure. And then there'd be the EU citizens fearing having to leave and the UK citizens in the EU having to return. Plus the protracted court cases at the WTO and UN over the budget and our tariff schedules. It would be a horror show, and people are increasingly unconvinced by the government's attempts to pretend otherwise.

This school of thought demands that the British government admits what Europe already knows: it won't walk away. It demands that ministers accept that, be realistic, and stop threatening to blow their own brains out.

This isn't really a soft Brexit at all, but because the rhetoric around the issue became so deranged and hysterical during the 12 months after the vote that it was eventually considered a part of the soft Brexit spectrum. When people say 'soft Brexit', this is often what they mean, even though it isn't a particularly useful description of it.

Of course, you can take aspects of any of these plans and pretend they are soft Brexit. For instance, ministers might make a unilateral guarantee to European citizens and say that is soft Brexit. Or they could commit to losing the Ukip-like aggressive rhetoric towards Brussels and call that soft Brexit. Or they could approach Brexit from a priorities basis, rather than an outcome basis, for instance by pursuing a jobs-first Brexit, as Labour is saying, or an economy-first Brexit, as chancellor Philip Hammond has reportedly been saying.

All these ideas would be welcome, but they are not really soft Brexit. In reality, soft Brexit is about preserving Britain's membership of either the single market, the customs union, or both. That's the key definition.

In all cases, soft Brexit involves a trade-off between control and economic benefits. The more you cooperate with other countries, the more control you relinquish. The more control you retrieve, the more barriers you put up against cooperation. That's partly why it is so useful to talk about these options. They do not just lead to more sensible outcomes. They involve a realistic assessment of trade-offs, rather than the emotional identity politics of the last 12 months.